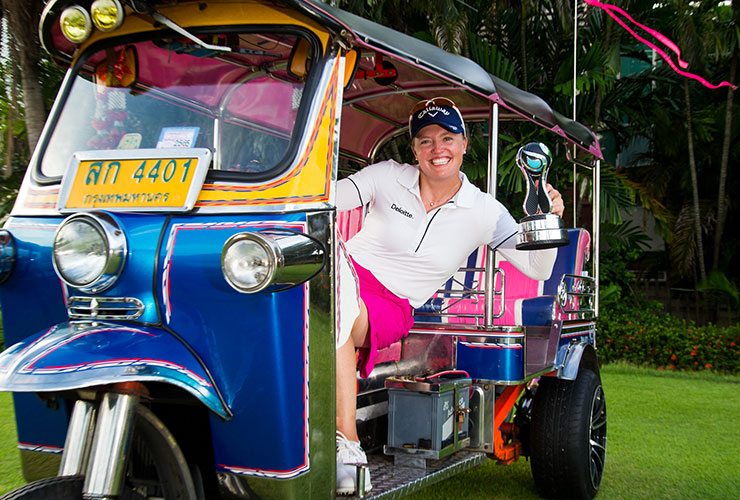 A bogey-free six-under-par closing round at Thai Country Club was enough to overhaul world No. 13 Tavatanakit, who led by two after the second round. But the 2021 ANA Inspiration champion struggled to a final day one-over 73, and playing partner De Roey flourished, finding six birdies as she romped to a three-shot victory and her maiden Tour title.

“It feels great,” said De Roey – the first Belgian to win an LET title in 25 years. “I was waiting for this for a long time so I’m very happy.

“It was actually a really good day. I started quite strongly. I was hitting it quite close, made birdie on the second. I just stayed patient and I dropped in some good putts.

“I’ve been working hard on my game, just trying to stay patient for the win. I was really hoping for this last year, so I’m really happy I got it now this year.”

The 30-year-old added: “I have a pretty good record in the Aramco Team Series events – I’ve picked good teams. But I love it. The first few days I really played for the team. They really pushed to make a lot of birdies. Yeah, super happy. I mean, it’s been a long time for me. I fought really hard and I’m happy I came through.”

Played over three days, this was the first $1 million Aramco Team Series tournament to run under 2022’s new format, in which its $500,000 prize-fund team element – where three LET professionals team up with an amateur golfer – is battled out over only 36 holes.