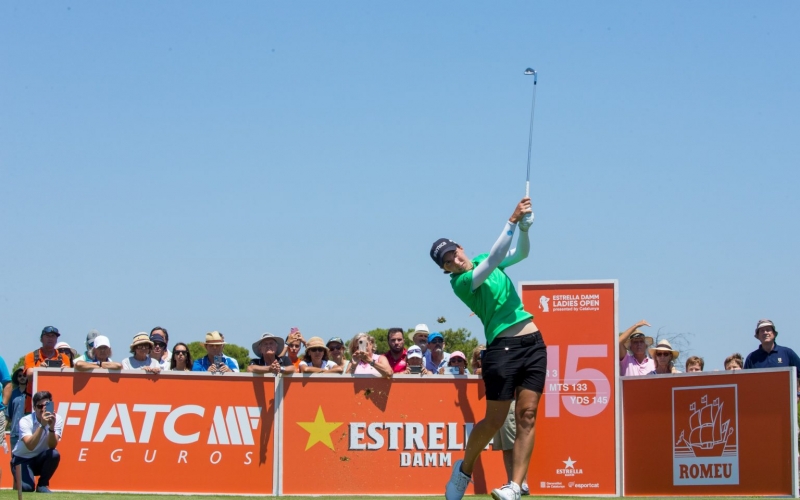 By Matt Smith
Spanish home hope Carlota Ciganda posted a four-under 68 on Saturday to maintain her lead on 16-under after three rounds at the Estrella Damm Ladies Open.

Aiming for a wire-to-wire victory, the 2019 tournament champion holds a four-stroke lead over Swedish pair Maja Stark and Sofie Bringner heading into the final round at Club de Golf Terramar in Sitges outside Barcelona.

The 34-year-old from Pamplona started strongly with a birdie on the first hole and carded a further three consecutive birdies from the sixth hole for a flawless outward nine of four-under-par 33. She came home in level par 35 and said: “I hit nine greens on the back and it would have been nice to have made a couple of birdies. In the end, there were no bogeys on the card again, so I’m happy. I played solidly. On 16, a par-5, I had a 6-iron in my hand and I didn’t make a birdie, but still, it was good golfing. I think I hit 16 greens today.”

Trailing Ciganda are Bringner – who shot the tournament low round of eight-under-par 64 on day three – and Stark, the LET Race to Costa del Sol leader who overturned a seven-shot deficit to win the tournament nine months ago and is fresh off a win at the Amundi German Masters last weekend.

Ciganda said that she could not take her foot off the gas and continued: “I think Maja Stark is a great competitor and she scored five-under in the last seven holes today, so I don’t think anything is enough. Playing golf, you have to be very humble and keep playing well. I want to try and win the day tomorrow.”

Magdalena Simmermacher from Argentina, who carded a 68, sits in fourth place, followed by Laura Beveridge of Scotland in fifth on 10-under.

Sweden’s Jessica Karlsson and Spain’s Nuria Iturrioz are tied for sixth on eight-under-par, with a further five players tied for eighth place on seven-under.