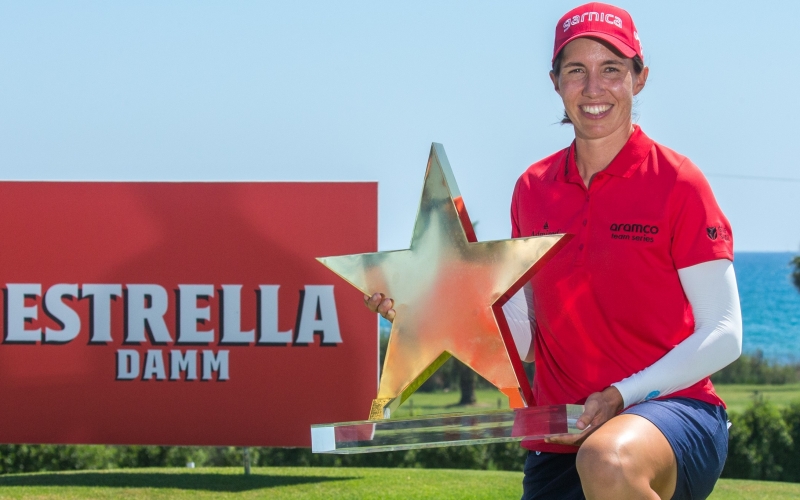 By Matt Smith
Carlota Ciganda claimed a wire-to-wire victory on home soil in the Ladies European Tour Estrella Damm Ladies Open outside Barcelona on Sunday, but it was not without any lack of drama.

The 34-year-old from Pamplona won this event in 2019 and needed all her experience and nerve to hold of a pack including Scotland’s Laura Beveridge, Swedish pair Maja Stark and Elin Arvidsson and Argentine Magdalena Simmermacher, who was ahead in the final round at one point, despite Ciganda going into the day with a four-stroke advantage.

But the Spaniard clung on to claim a two-stroke lead from Beveridge on 18-under, with Arvidsson and Simmermacher tied for third at Club de Golf Terramar.

The five-time Solheim Cup player said afterwards: “Winning is never easy”, and she had to dig deep to hold off the chasing pack.

Simmermacher picked up shots at the first and third holes and then made a run of four straight birdies from the eighth through to the 11th to gain the outright lead after Ciganda double-bogeyed the ninth hole.

However, a three-putt bogey from Simmermacher on the long 12th hole ended her rally and from that point, Ciganda fought for every single shot and cries of “Vamos” echoed around the course.

A relieved Ciganda was on cloud nine after lifting another title on home soil, having also won the Andalucía Costa del Sol Open de Espana in November. She said: “I love playing here in Spain and winning here is always special. My family is here and I have lots of support. There is always extra motivation to win here and I love it. It’s great.

“Winning is never easy. I started with a birdie on the first hole, bogeyed number two and then good birdies on the par fives. I just hit a bad tee shot on nine and that cost me a double. It was a little shaky and it wasn’t easy but I’m very happy with how I handled myself. That eagle on 16 was amazing and then a birdie on the next one.

“I looked at the leaderboard on 11 and I just thought, if you do what you need to do, you are going to be fine. I didn’t look too much, but I did see on 17 that I was two or three ahead, so that was nice.”

Beveridge, who fired a 66, settled for second, a week after her tie for fourth in the Amundi German Masters.

“I’ve just really enjoyed this week from the word go,” she said. “I’ve had my husband, Keil, on the bag, and we’ve been working a lot on rhythm and how I am on the golf course, trying to be super relaxed. I think Spain is a perfect place to do that, you know, have a plate of tapas in the evening and maybe a glass of wine. I just took it easy this week.

“My putting has improved and I’m more comfortable on the golf course. Everyone takes time to find themselves and how they are as a pro and it’s just nice being me on the course. I can show emotion, react how I want to, I’m quite friendly and chatty on the golf course and it’s just accepting that that’s the way I want to play. It’s nice that I can now perform within myself.”

Simmermacher added: “I played really well all day and in the middle of the round I had a good birdie run going on. I would just step over the ball and make the putt, but then the three-putt on number 12 put me down a bit. I played good golf for the rest of the round but didn’t make the putts. I had some good saves and my brother, Santiago, was watching from outside the ropes. He said that I was still going for the pins on every hole and that’s why I had some really tough up and downs. Once I had lost the lead, I wanted to get it back, so I kept going for the pins and I ended up in the worst places possible, but I managed to save pars from a lot of places, so I’m happy.”