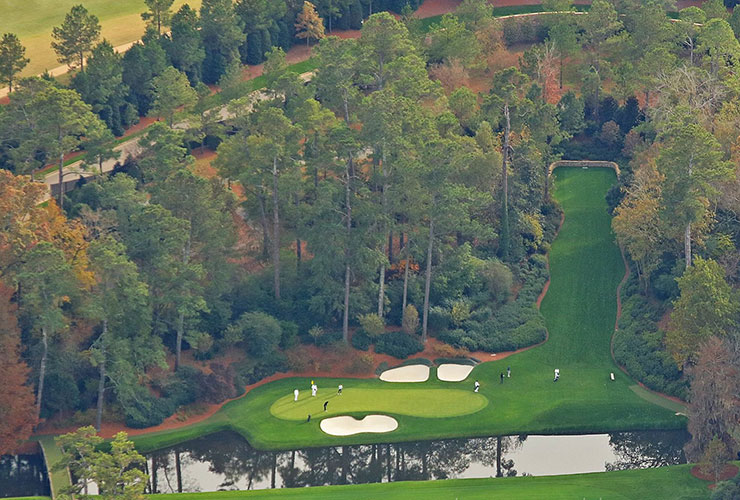 By Christopher Powers
For years, it has been rumored that major changes would be coming to Augusta National’s iconic 13th hole. This past August, aerial photos taken by Eureka Earth confirmed that work had begun on the famous par 5, and that it would play significantly longer once the project was completed.

That work is now done, confirmed by overhead shots from Eureka Earth that hit social media early on Tuesday. Though Augusta National won’t confirm the exact yardage of the new tee until Masters Week, we’re told from a recent visitor that the scorecard reads 545 from the tournament tees. Suffice it to say, that walk to the 13th tee is going to be much, much longer for those coming off 12 having just made bogey or worse:

We’re no mathematicians, but it’s fair to assume the hole has been extended by a distance between 40 and 50 yards, which would make “Azalea” play somewhere in the 550- to 560-yard range. It doesn’t sound like much for the best players in the world, but it will put a driver back in their hands and, more importantly, negate the ability to take it over the trees and overpower the hole, which is what the big hitters were doing in recent years. It was not uncommon to see 8-iron, 9-iron and even pitching wedge being hit into the green on the second shot for the bombers. And in some cases, driver was not required to reach it in two at all.

The potential drawback, of course, is that now it could play as a three-shotter that yields more birdies and less eagles, which is what happened when the club lengthened the 15th hole ahead of the 2022 Masters. The 15th, once home to countless tournament-altering and earth-shaking eagles, yielded exactly zero eagles in last year’s tournament, while still playing as the fourth-easiest hole of the week. In the quest to make the hole longer and harder, it’s possible the club achieved only the former and robbed it of some serious back-nine excitement in the process. The other side of that argument, which also applies to the 13th, is that the risk-reward is that much greater now that players have a longer club in their hand on the second shot.

You may also like:
Was Rory at his best in 2022? Take a look at the stats
Tiger’s latest victory in PGA Tour 2022 PIP standings
Legends of the fall: Rory and DJ among the big winners this autumn
Gareth Bale’s crafty World Cup golf hack
Take a look at the players who have qualified for the 2023 Masters — as it stands
Dubai Duty Free Golf World Cup returns
LOOK: Rare Tiger Woods shirt up for auction
DP World Tour ‘Race to Dubai’ to return from 2023
LOOK: Prize money payouts at DP World Tour Championship
Rory deserves to brag after DP World Tour triumph
Rahm raises the bar with third DPWTC
How Lydia Ko returned to LPGA glory
Get your FREE November issue of Golf Digest Middle East here
All set for showdown at JGE
How Bryson dropped 20 pounds with new diet
Look DPWTC Day 3 tee times
Fitzpatrick holds upperhand as Rory roars
PGA Tour to lose long-time and loyal sponsor
How South Australia landed the LIV gig
Who needs to do what to win DP World Tour Rankings race?
Rahm slates ‘laughable’ OWGR, open to LIV Golf players earning ranking points