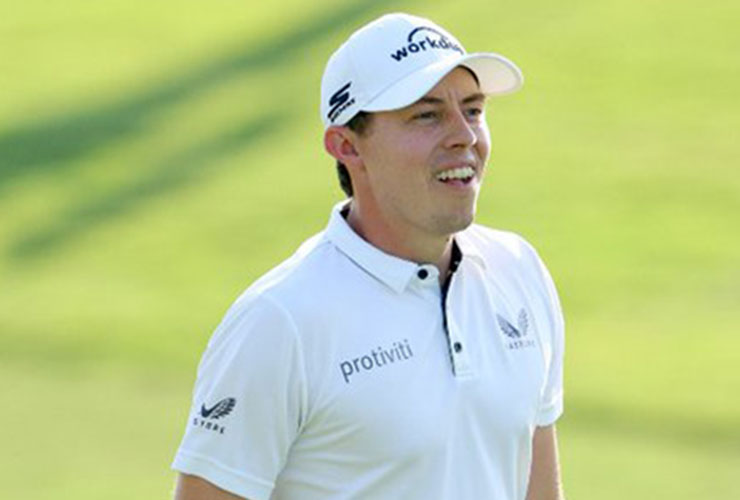 By Matt Smith
It was an eventful day for very different reasons for the DP World Tour Championship leaders Tyrrell Hatton and Matt Fitzpatrick on Friday, with one dialling in for a solid five-under, while the other chose more of a roller-coaster route to his 67 to share the lead at Jumeirah Golf Estates on 12-under.

First of all we have Fitzpatrick, the US Open champion keeping is steady-as-she-goes, racking up three birdies either side of the turn, with a solitary bogey putting him in the driver’s seat for the season-long DP World Tour Rankings race, where he looks poised to leapfrog both Rory McIlroy and Ryan Fox as it stands.

Then we have the more volatile Hatton — Fitzpatrick’s playing partner for the day. He matched him by the time they signed their cards after the 18th, but it is fair to say he had a more adventurous route to the clubhouse. There were five birdies in the first seven holes for the Englishman to send him clear at the top, set off by a bogey on the sixth. Another bonus on the 10th had daylight between him and the chasing pack before a calamitous spell saw two dropped shots on 11 and 12, allowing Fitzpatrick to make up ground. He steadied the ship with a brilliant two on the island 17th to head into the weekend alongside Fitzpatrick three clear of closest challengers Alex Noren (69) and Adri Arnaus (68) on nine-under.

World No. 5 Jon Rahm made his move with a 66 to get to T5 on eight-under, while fellow Rankings hopeful Tommy Fleetwood is T8 on six-under.

Also lurking just behind are the intriguing pair of LIV Golf star Adrian Oategui and Rory McIlroy on five-under — the latter closing with a sensational birdie, birdie, eagle finish to get back into contention, alongside Scotland’s Richie Ramsay, who had the shot of the day with an eagle hole-out from the fairway on the last.

When asked what clicked after 33 holes, McIlroy was as honest as ever. “I don’t quite know,” he said. “The first 33 holes were quite average to say the least. Yeah, it was nice to finish with a flourish and at least have some positivity going into the weekend. I obviously got myself a little closer to the leaders.

“I think it just happened. Hit two lovely shots into 16, and hit a really nice iron shot into 17. And then got lucky at the last. I was trying to go up the left side of the creek, and I ended up going up the right side. It’s one of those ones, you’re in the middle of it, you might miss it one side or the other.

“I got away with it and hit a great 4-iron for the second, probably the best swing I’ve made all week, to set up the eagle. It was really nice to finish like that. As I said, gives me some positive vibes to work with going into the weekend.

“Fitz is obviously making it more difficult for me. I don’t know what the permutations are but as long as he keeps playing well, I’m going to have to play better. It’s a good challenge coming up the last 36 holes, and I at least feel like I’ve still got something to play for here, so I’m excited for that.”

As Fitzpatrick was closing out his round, Rahm was looking on and added: “It was a really good round of golf. I was really comfortable all day. Hit a lot of good shots and gave myself a lot of looks. I can’t help to think on what could have been, right. Obviously I played a really good back nine.

“But it was good, that’s all I can say. Did a lot of good things and just trending positively. Just hope it keeps getting better on the weekend.”

As for Fitzpatrick? He is just keeping his head down and focusing on his game.

“I am really, really pleased with the way I played again,” he said. “And yeah, I scored really well, too. It was a good day. I have just got to keep pushing on, just keep playing how I feel like I’m playing right now. I feel really comfortable with where my game is at, particularly after three weeks off and looking forward to the weekend.”

“I knew The Race to Dubai was in the back of my mind. To be honest it wasn’t something I was really thinking about. My focus was just trying to win the event this week.

“Like I say, I feel like I’ve put two good rounds to start with and put myself in position and do more of the same and see where it gets me on Sunday.”