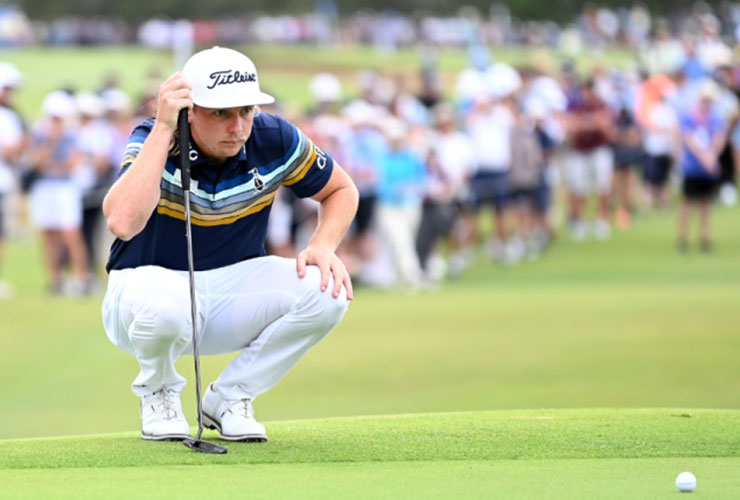 By Matt Smith
LIV Golf’s star attraction Down Under, Cameron Smith, is eyeing a perfect homecoming after posting a three-under 68 in the PGA of Australasia and DP World Tour co-sanctioned Australian PGA Championship at Royal Queensland Golf Club in Brisbane on Thursday.

The world No. 3 returned to his native Australia for the first time in three-years due to COVID-19 travel restrictions and undertook the 9,000-mile trek from his base in Jacksonville, Florida, with the Australian PGA Championship his mission.

And he did not disappoint the thousands of fans who arrived early at Queensland GC for his 6am tee-off time, carding an outward 32 with four birdies before a more modest 36 coming home.

One think Smith would be keen to see this week is a fight for the title in the final group on Sunday with his Day 1 playing partner, former world No. 1 and fellow Aussie Adam Scott.

“I’d like it – I haven’t done that yet with Scotty,” Smith said. “He’s coming into form the old fella, so he might be hard to chase down over the weekend.

“He’s obviously one of the best golfers ever, so it would be a good one.”

Scott posted a five-under 66 to lie two strokes ahead of Smith in T4, with the trio of Min Woo Lee, Jason Scrivener and John Lyras leading the way on six-under.

“It was incredibly early, but as we were walking out to the tee people were streaming out to the golf course and so they should,” said Scott. “It’s great to see everyone coming out. It’s exciting that Cam’s coming home to play off the back of the year that he’s had.”