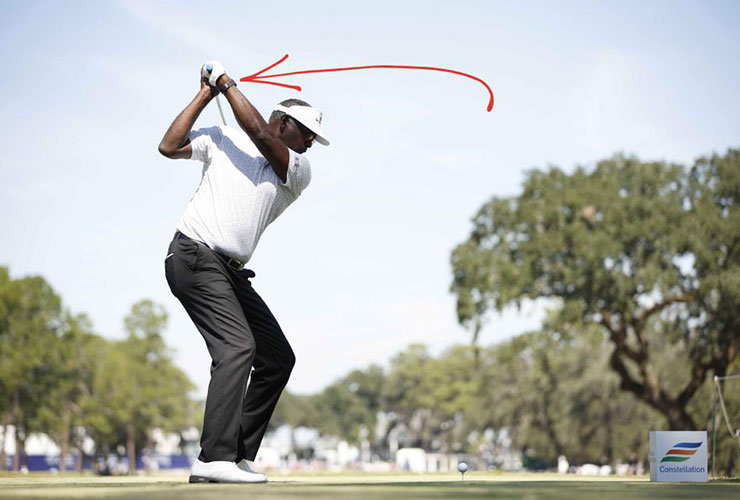 By Luke Kerr-Dineen
No golfer can escape the ravages of time. But 59-year-old Vijay Singh, who remains one of the hardest workers in golf, seems to be staving off their effects somewhat.

As the years kept piling up, Singh began noticing an alarming — and relatable — trend in his golf swing: His drives started travelling shorter.

Singh’s driving distance average hovered around 300 yards when he first arrived on the PGA Tour Champions in 2013. By 2019, his average had dipped below 290 yards. The cause, he quickly determined, was his backswing.

“The length of your backswing is a big factor as you get older,” Singh says. “When you’re in your 20s or 30s, you can hit the ball far because you can get your backswing to parallel or past parallel. As you get older, it gets shorter and shorter. If you look at the PGA Tour Champions, 50, 60 per cent of [players] can’t even get their swing to parallel.”

“It’s like throwing a ball, or boxing. A longer wind-up creates automatic power,” he says. “If I can increase the length of my back swing, it gives me a few more yards without even thinking.”

His journey to a longer backswing culminated in a partnership with DeWiz, a cutting-edge product that golfers wear like a wristwatch on their lead arm. Once they do, the DeWiz will track a variety of advanced metrics, such as length, time and direction of backswing in 3D.

Singh has been using DeWiz to practice, and it’s been working. At 59 inches, his backswing is as long as it was in his prime, and despite pushing 60 years old, he’s been inside the top five in driving distance with a nearly 300-yard average for the past two PGA Tour Champions seasons. 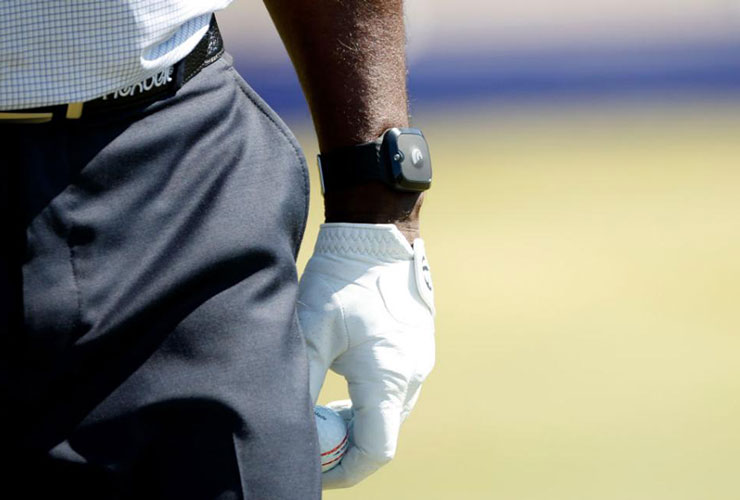 But looking for an extra edge, Singh embarked on a little experiment recently: At the PGA Tour Champions’ Constellation Furyk and Friends tournament last month, he wore DeWiz in competition to see how his swing changed from the golf course.

“For every golfer, taking your range swing to the golf course is the hardest thing to do,” he says. “On the range I swing really well and so free, I wanted to see what the difference was.”

DeWiz adapted the device so it was rules compliant, and it was only after the competition ended that he was able to look at the results. When he did, here’s what he found.

His swing got shorter

On the range, the average length of Singh’s backswing (as measured by the distance his lead arm travelled) averaged more than 61 inches. On the course, his average backswing length dropped 1.3 inches, to less than 60 inches.

Whether it’s the subtle nerves that come from being on the course in competition, a subconscious desire to seek more control or a result of hitting fewer golf shots in rapid succession, golfers’ swings simply get shorter on the golf course.

“Vijay does very well to keep his backswing length between the range and the course so similar,” says Markus Westerberg, DeWiz co-founder. “We typically measure amateur golfers with a 6-inch difference in their length of backswing between the course and the range.”

His swing got faster

Another finding in Singh’s data was the speed of his swing, as measured from start to impact. His subtly shorter swing caused his swing to get about a tenth of a second faster.

“I really have to be aware of the slowness of my backswing,” Singh says. “My focus has to be slow all the way to the top of the backswing, so I can complete a full turn.”

When he doesn’t do that, that’s when things went wrong … 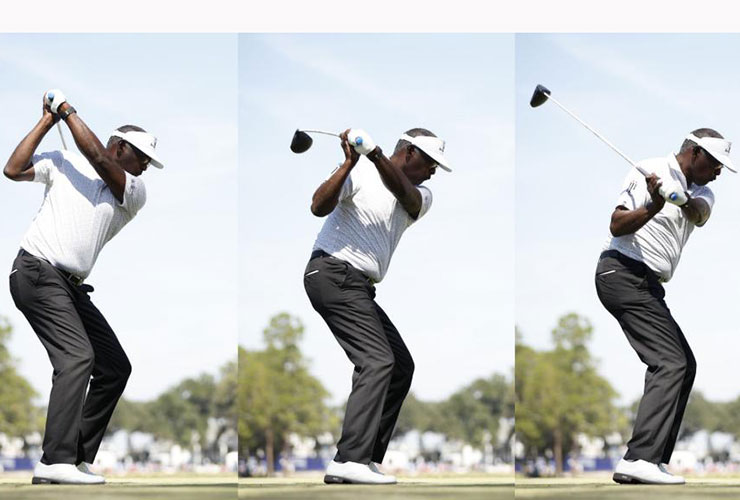 His transition got more in-to-out

Perhaps the most interesting finding from Singh’s experiment was the data from his mis-hits. While his swing got slightly shorter and faster on the course generally, his swing got even shorter and faster, on his poor shots. When that breakdown in his swing’s rhythm happened, it threw off the timing of his transition: His arms dropped an extra two inches more behind him. This created a series of compensations that caused Singh’s downswing to move too in-to-out, and often meant he was missing shots out to the right.

“I hit a miserable shot on the third hole,” Singh remembers. “When I went back and looked at the data, I saw how my downswing changed. Now I have the information that you can be aware of and improve.”

It gives him something to work on and underlines an important point for the rest of us along the way: That golfers’ swings tend to get shorter and faster on the golf course, which will throw off the timing of your transition. Feeling a longer and slower backswing may feel odd, but it could be your secret to finally transferring your range swing to the course.