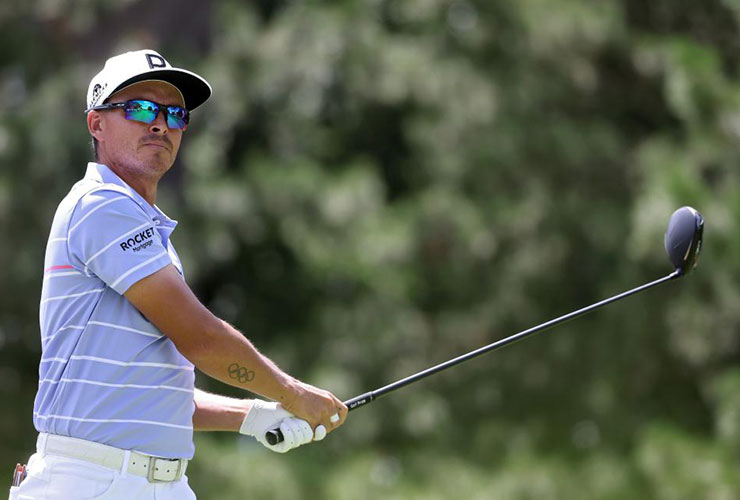 By Dan Rapaport
The first day of the post-lawsuit PGA Tour played out in hot and steamy Greensboro, North Carolina, where players have one final opportunity to bank some FedEx Cup points — and, for some, secure their playing privileges for next year — before the playoffs begin next week. This week’s field is somewhat light on star power, with most of the big boys still enjoying an extended break after the Open Championship and before the three-event sprint ending at the Tour Championship, but there’s always plenty of drama around the 125th-place bubble during Wyndham week. Finish inside the top 125 and you’re all set for next year, when purses will increase considerably. Finish outside it, and you’ve got some work to do.

Here are three takeaways from Thursday at Sedgefield Country Club:

The Tom Kim train rolls on

Joohyung Kim is the third player on record to make a quad or worse on the first hole and finish the round under par. pic.twitter.com/XdoucjzDcx

The mediocre train pun there — that’s a reference to Thomas the Tank Engine. Why do we care about Thomas the Tank Engine? Tom Kim. That’s why. Officially listed on leaderboards as Joohyung Kim, the 20-year-old South Korean goes by Tom because he liked Thomas the Tank Engine as a kid. Kim has chugged up the world rankings in the last eight months. He began 2022 outside the top 130 but won his first event of the year on the Asian Tour and continued solid play on that circuit got him into the US Open. He finished a respectable 23rd that week and followed it with a solo third against a stacked field at the Genesis Scottish Open. He made his next two cuts, including at the Open Championship, before a final-round 63 and a solo seventh at last week’s Rocket Mortgage Classic saw him rise to world No. 34 — and, more importantly, all but lock up his PGA Tour card for 2022-23 through non-member points. There is no one on Earth who is both younger than Kim and ranked higher than him.

It’s been a hectic stretch in a foreign country, and after he quadruple-bogeyed his first hole of the day on Thursday, you’d forgive him for mailing it in and calling it a year. But he has too much energy to go down so easily. Kim played his final 17 holes in seven-under to post a most impressive three-under 67. Per the PGA Tour, he is just the third player on record to start his round with a quad and still shoot under par.

“I was laughing because it was the first hole of the day and it was probably the worst start I’ve ever had in my career so far,” Kim said. “All I could do was laugh because just some shots I hit there was pretty awful. But I don’t know, for some reason I felt calm. It was one bad hole and I just told myself, you know what, I can still get this, I can still shoot under par today and somehow I did, yeah.”

A career-low round for a journeyman

Odds are, you would not recognise John Huh if he walked by you. He’s won on the PGA Tour, but it was an opposite-field event and it happened more than a decade ago. Huh has never cracked the top 60 of the world and currently sits at No. 248. But John Huh has quietly made over $10 million in his PGA Tour career, and this week marks his 266th start. He is, by any reasonable definition, a journeyman. And this start is as important as any, as he entered the week ranked 120th in the standings, dangerously close to that 125 threshold.

Good time, then, to play the best round of his career. The 32-year-old went out in 29 en route to a nine-under 61, which has him sitting on a two-shot lead over Sungjae Im. He wasn’t expecting this.

“I’m actually surprised I’m at the top of the leaderboard, yeah, to be quite honest with you,” Huh said. “I didn’t really feel my game was there, but it’s one of those days where I took advantage of some good shots and good breaks, I think.”

Rickie Fowler’s in danger of missing the post-season again

The pressure is on.@RickieFowler sits one spot outside the Playoffs at projected No. 126 in the #FedExCup rankings, down 3 from No. 123. pic.twitter.com/tRv7t5zjdv

Prior to last season, Rickie Fowler had made the FedEx Cup Playoffs every season in which he’s been a PGA Tour member. That streak ended last year, and that was supposed to be the low point of a prolonged slump that has run concerningly long. The early signs this season were positive — he hung around the lead in his second start of the wraparound campaign, finishing with a T-3 at the CJ Cup at the Summit Club, but he has failed to post even one top-20 finish in 18 starts since.

As such, he entered this week at 123rd in the standings — which have been adjusted to not include guys now playing on the LIV Golf series — and needs to make the cut to get into the playoffs. He’ll still have a card next year by way of his 2015 Players Championship victory but missing the playoffs two years in a row would be a pretty brutal pill to swallow.

It could well happen. A week after missing the Rocket Mortgage classic cut by six, Fowler opened the Wyndham with a one-over 71 that has him outside the top 100 heading into Friday. It’s gut check time — if he’s to salvage a respectable season, he absolutely needs to shoot something solid. Which is one tough ask given the state of his game.

You may also like:
Hearing date set for LIV Golf trio
‘We just want to co-exist’: Lee Westwood opens up on LIV Golf
LIV Golf numbers grow on Asian Tour
Get the August 2022 edition of Golf Digest Middle East FREE here in English and Arabic
Legend John Daly ‘begged’ for LIV Golf spot
Mickelson was suspended by PGA Tour in March; banned for two years
Mickelson and Dechambeau lead group of 11 LIV golfers suing PGA Tour
Adam Hadwin in trouble with wife Jessica — again
LIV Golf gives to local charities in New Jersey
Bryson DeChambeau on LIV/PGA feud and his $125m signing-on fee
What it is like to be the first woman from your country to win a title
Five players to watch at the AIG Women’s Open
Australian army target more glory in Scotland
Laura Davies’ unique return to Muirfield
Phil Mickelson becomes highest-paid athlete of 2022
WATCH: LIV Golf highlights from Bedminster
Stenson takes debut LIV Golf title at Bedminster
LIV Golf takeaways after third event in New Jersey
The Gulf Club: Latest news from the UAE and beyond up to August 2022
Crocker takes the glory at Hero Open