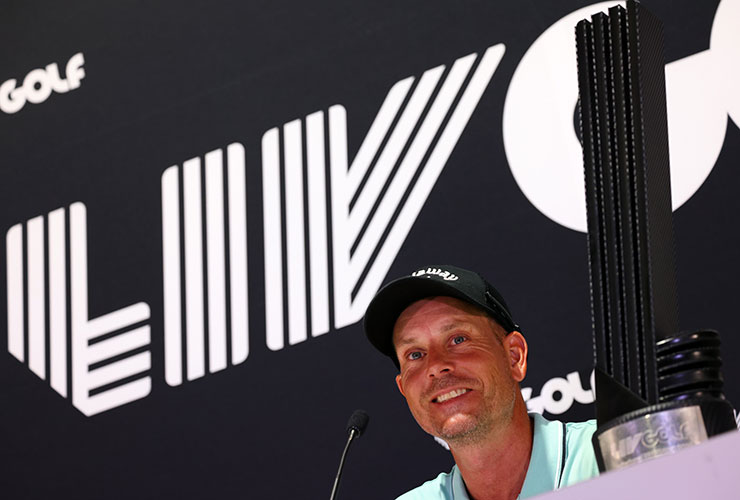 By Matt Smith
If Henrik Stenson was wanting to make a statement after a roller-coaster couple of weeks, he could not have asked for a better script as he surged to his first title in five years at LIV Golf Bedminster in New Jersey — only a matter of days after he was stripped of the Team Europe Ryder Cup captaincy.

With emotions riding high, the Swede, who last won at the Wyndham Championship in North Carolina, was beaming as he stood on top of the podium on Sunday in New Jersey, with his hands on some siverware once again.

After the tumult of his Ryder Cup removal — just before he announced he would make his LIV Golf debut at Donald Trump’s course in Bedminster — the 46-year-old was all smiles on the last day of July in the New Jersey evening sunshine as he claimed his 22nd career victory.

At the third LIV Golf event of the season in a party atmosphere and music playing, Stenson shot a two-under 69 to take him to 11-under in the three-day competition, two shots clear of Matthew Wolff and Dustin Johnson. His reward was the trophy, the first-place cheque of $4 million, and a confirmation that he remains one of the world’s top players.

“I’m super-proud of the focus I managed to have this week,” said Stenson. “I’ve been working really hard to get my game back in shape, and it’s certainly going in the right direction as we know now.”

In the team competition, Dustin Johnson’s 4 Aces are also going in the right direction. The foursome, captained by DJ and including Patrick Reed, Talor Gooch and Pat Perez, won the team title for the second consecutive LIV event. In Portland, they won by seven strokes but rarely seemed threatened. In Bedminster, they won by eight strokes but the issue was in doubt midway in the round.

At one point, Stenson and his Majesticks team — captained by Lee Westwood — briefly held the team lead. At other times, the two teams were tied. But 4 Aces pulled away in the final few holes to take the $3 million first-place prize at 25-under. Majesticks GC finished at 17-under, earning Stenson an additional quarter share of $1.5 million, while the all-Spanish speaking Fireballs finished at 12-under and in third place for the second consecutive event.

“Through 10 or 11 holes, I think we were tied, so it was a lot different,” said Johnson, who was in the final group with Stenson and Reed. “Obviously, I was playing with Pat and we’re all watching the leaderboard and especially watching the team score.

“Today, we knew we needed to play some good golf to finish if we wanted to win this tournament as a team, and also we were both right in the mix trying to chase down Henrik.”

Chasing Stenson, however, proved to be too difficult. He started the day with a three-shot lead over Johnson, and by the first hole, the lead was five, thanks to a Stenson birdie and a Johnson bogey after an errant drive forced the 4 Aces captain to chip back onto the fairway.

Neither Johnson nor Reed could get the putter going, and Stenson never opened the door. His only bogey of the day came at the par-5 15th, and he still walked off with a two-stroke lead.

Credit his 3-wood, a club that he’s leaned on plenty of times during his career and certainly at Bedminster this week in order to avoid the rough and other trouble areas. After one particularly shot in round two, he even kissed the club in a show of appreciation.

“It’s been an important club most of my career I’d say, and yeah, I certainly hit some good ones this week,” Stenson said. “I think the golf course obviously set up nicely for me. It’s a lot of positional play off the tee, and we surely found a big number of fairways this week.

“First day in particular I played really, really solid. Yesterday was a little bit more of a grind, and then today we played pretty good for the most round. It was a little bit wobbly coming home, but we’ll take it in the end, and yeah, the 3-wood didn’t do me any harm.”