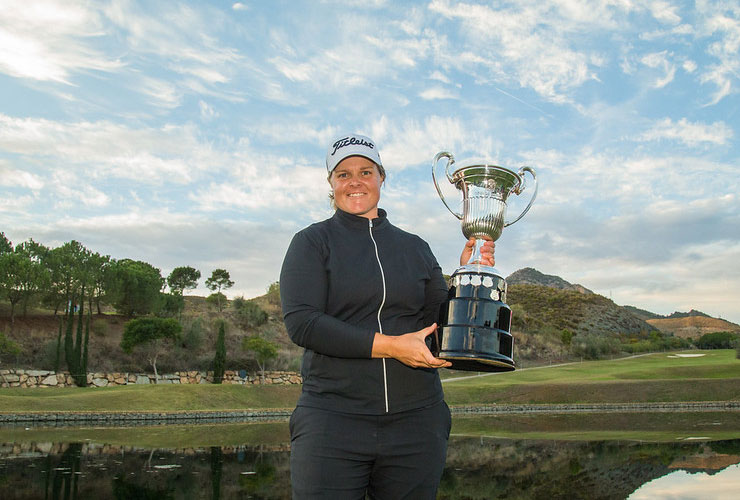 By GolfDigestME.com
Caroline Hedwall is back in the winner’s circle for the first time in four years after winning the season-ending Andalucía Costa del Sol Open de España.

The Swedish star was locked in a battle on 18-under with Switzerland’s Morgane Metraux after regulation play, the duo headed for a playoff and after playing the 18th hole three times they went to the 17th hole.

It was a hole where Hedwall has had success all week and she made the green in two and sunk her birdie putt to win her seventh LET title.

“It just feels awesome, it feels forever that I have waited for that win,” she said. “I wasn’t sure I still had it in me. It’s so nice to get it together and get this win.

“It has been a roller-coaster to be honest, I had injury in 2014 that was really tough on me, and I had a hard turn on my self-confidence. That win in 2018 meant a lot to me.

“It was tough during Covid-19, I didn’t want to travel as much but now it’s more or less back to normal and it feels great. My game is coming together really nicely, and it was awesome to finish with that.”

The 33-year-old produced her best round of the week on the final day and was bogey-free rolling in six birdies on Sunday.

“I have been hitting my driver really well the last couple of weeks and I could take advantage of the par-fives here and reach and two-putt for birdies and even make a couple of eagles,” she added. “It’s been great, I have really enjoyed playing this golf course, it was a lot of fun.

“I wasn’t sure I still had it in me, and I think I just showed myself I can, and the 2023 Solheim Cup will be a goal for next season.”

Metraux, who won the Ladies Italian Open earlier in the season, produced a final round of 69 with four birdies to finish level with Hedwall and ultimately second overall.

The four-time LET winner was bogey-free in her fourth round with three birdies on her front nine, before rolling in a further three on the back nine and an eagle.

She said: “It was very exciting. I came off yesterday quite frustrated, so it was nice to play a solid round today and I didn’t really think about it much until the 17th when I happened to eagle. All of a sudden, I was in the lead. I’m happy with my round and the tournament.“

With her third-place finish, Grant clinched the 2022 Race to Costa del Sol title having capped an incredible rookie season.

She added: “I am just very relieved, very happy. This is huge for Swedish golf, having Johanna as well as number three on the rankings. I’ve had Carro [Hedwall] as a role model myself to just see her out there winning and getting that moment for herself is awesome as well.”

Ireland’s Leona Maguire finished in fourth place with a total of 16-under, England’s Alice Hewson and Spanish amateur Cayetana Fernandez were one shot further back in T5 on 15-under.