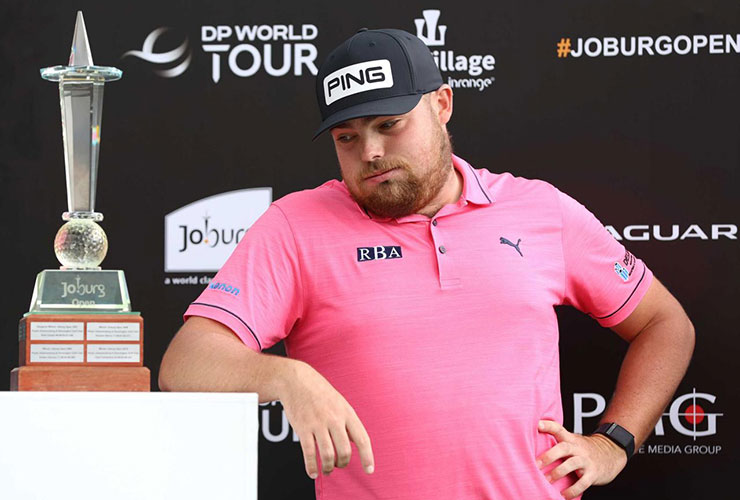 By Ryan Herrington
Somewhere in one of the corners of his mind on Sunday, Dan Bradbury had to be wondering if his good fortune might run out at South Africa’s Houghton Golf Club. Sure, the Englishman had held the lead for the first three days of the Joburg Open. But this was just his sixth start since finishing his college career at Florida State and turning professional last summer, and only his third in a DP World Tour co-sanctioned event. Winning isn’t that easy, yet that’s what the 23-year-old was making it look like.

Sure enough, there was no banana-peel moment in the final round. A four-under 67 included a lone bogey on the 18th hole, but it was plenty for Bradbury to beat Finland’s Sami Valimaki by three shots and claim an unlikely, but life-changing win.

“I can’t tell you how it feels because it hasn’t sunk in,” Bradbury said upon finishing off a 21-under 263 performance and earning membership on the DP World Tour after playing on a sponsor’s exemption and having no status entering the week. “It’s just a lot of pressure taken off your back — that’s nice.”

In addition to grabbing a DP World Tour card, Bradbury also secured an invitation into the 2023 Open Championship at Royal Liverpool given to the top three finishers this week not already in the field next July (Valimaki and Christiaan Bezuidenhout claimed the other two).

Sitting 1,384 in the world ranks entering the week, Bradbury jumped to a quick start with an opening 63 that included a bogey and double-bogey on the card. He continued to fair well with a 66-67 that left him top of the leaderboard entering the final round.

Bradbury admitted to nerves before teeing off but after nearly holing a chip for eagle on the first, he said things settled down. “It wasn’t as bad as I thought it would be,” Bradbury said. “Once we got going, and started off nice, that solved the nerves quite a lot. There was a moment on the back nine where things got a little tighter.” Valimaki made back-to-back birdies on the 14th and 15th to cut Bradbury’s lead to two.

But Bradbury hit his tee shot on the par-3 16th to seven feet and converted the birdie to make things easier over the last two holes.

“I was a bit worried there on the 15th when Valimaki rolled that monster in but it was kind of the same thing all week, just keep playing my own game and I knew I was playing good enough,” Bradbury said. “It turned out that way in the end.”