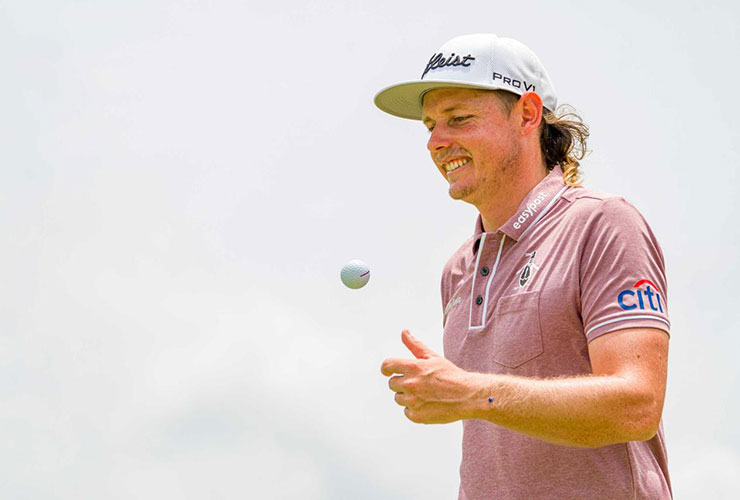 By Evin Priest
Cameron Smith’s first trip back to his native Australia in three years wasn’t just about headlining the Australian PGA Championship and showing off the Claret Jug to family and friends in his hometown of Brisbane. For the World No. 3, who now plays on LIV Golf, it was also a return to the traditional form of the game and Official World Golf Ranking points. And it was a winning return.

To close out his third career Australian PGA Championship victory, the 2017 and 2018 champion battled two weather delays in Sunday’s final round at Royal Queensland Golf Club en route to securing a three-shot victory at the DP World Tour co-sanctioned event. Three birdies in his final seven holes, and a clutch bunker save at the 18th, gave Smith a closing 68 and a 14-under(270) total. Japan Tour regular Ryo Hisatsune (65) and Australia’s Jason Scrivener (67) tied for second at 11-under.

Smith had already won four tournaments in a memorable, if controversial 2022 season. Three came on the PGA Tour, including the Sentry Tournament of Champions, the Players Championship and the DP World Tour co-sanctioned 150th Open at St Andrews before the 28-year-old joined LIV and went on to win in just his second start on the circuit outside of Chicago. But the Australian PGA Championship was the most emotional triumph, given the amount family in the gallery who hadn’t seen Smith play in person since before the COVID-19 pandemic when Australia introduced harsh travel restrictions.

Among the loved ones at Royal Queensland was Smith’s grandmother, Carol, who recently underwent two chemotherapy treatments. Impressively, she walked all 72 holes this week, including Sunday’s seven-hour, weather-interrupted final day. In all four rounds, Carol wore a custom-made ‘Team Smith’ maroon T-shirt, the colour Smith chooses to wear in final rounds because it is worn by his beloved Queensland state rugby team.

“I can’t believe she did it,” Smith said as he choked up on the 18th green at Royal Queensland. “Everyone at the start of the week was telling her to pace herself and she was out there all day every day, so it was pretty amazing. It was definitely inspiring. I don’t know how she did it, but it was also my dad’s birthday as well. After I got back to the tie for the lead there after 11, I really wanted to do it for those two.” 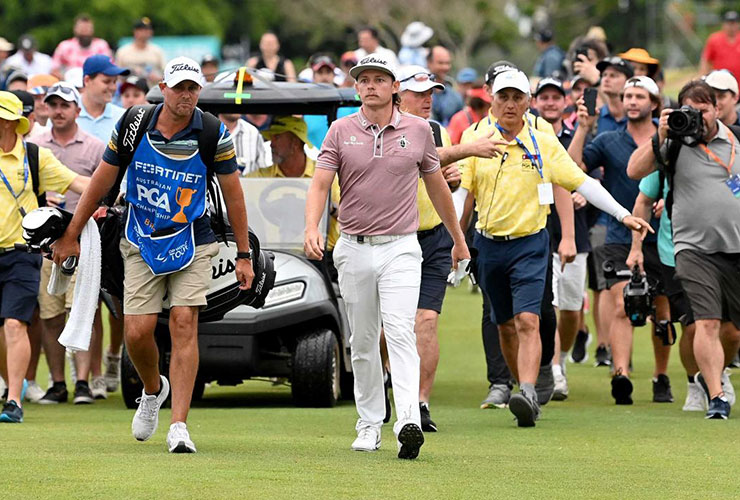 The crowds followed Smith in up the 18th fairway as he was winning the Australian PGA Championship. Bradley Kanaris

Smith seems stoic, as he showed at St Andrews when he overcame a four-shot deficit to Rory McIlroy and Viktor Hovland in the final round. But is he actually an emotional player who handles nerves and sentiment better than most?

“I wouldn’t say I let emotion get in the way of what I’m trying to do, but it’s nice to have a little bit of fire in the belly for sure,” he said.

At the par-3 11th, after the first weather delay, there was a turning point. Smith made a bogey, moments after Scrivener had birdied No. 13. It dropped Smith to a tie for the lead after starting the day with a three-shot cushion. Then, Smith hooked his tee shot into the trees on the driveable par-4 12th. But he pulled off a miraculous flop shot over a tree to close range for birdie. He made it and never looked back. “Scriv is a great player and I knew he’d keep putting the pressure on me,” Smith said.

Should Cam Smith go on to win the #AusPGA golf ⛳️ from a three-way tie, we’ll be talking about this outrageous flop shot from a damp lie, over a bank + tree to set up birdie. Champion stuff at 12th ⁦@PGAofAustralia⁩ #VisitBrisbane pic.twitter.com/KNXLGY8X9n

Smith’s win was also meaningful given he is conscious of criticism he faced after leaving the PGA Tour, where his six career victories were establishing a legacy. That criticism came from icons like nine-time major winner Gary Player and former Masters winner Fred Couples.

“I wanted to prove to myself and to others that I’m still a great player,” Smith said after winning LIV’s $20 million event in Chicago.

Smith’s return to 72-hole stroke play for the first time since the PGA Tour’s FedEx St Jude Championship in Memphis proved he remains one of the world’s best golfers, regardless of the format. He became the second LIV golfer to win a DP World Tour event, joining Spain’s Adrian Otaegui who won the Andalucia Masters in October (a February court hearing in the UK will determine if LIV golfers can be prohibited from playing DP World Tour events.)

Although the strength of field at the Australian PGA did not offer the same threat PGA Tour events used to for Smith, he still lined up against DP World Tour winners such as Min Woo Lee, who finished tied-fourth at seven-under, Rasmus and Nicolai Hojgaard, and DP WOrld TOur Rankings runner-up to Rory McIlroy Ryan Fox, along with PGA Tour winners Adam Scott, Marc Leishman, Cameron Davis and Lucas Herbert. Smith only won 10 World Ranking points, so there won’t be any movement within the top 10 in the World Rankings. But he will remain World No. 3 and that is not likely to change even if he were to win next week’s Australian Open in Melbourne. 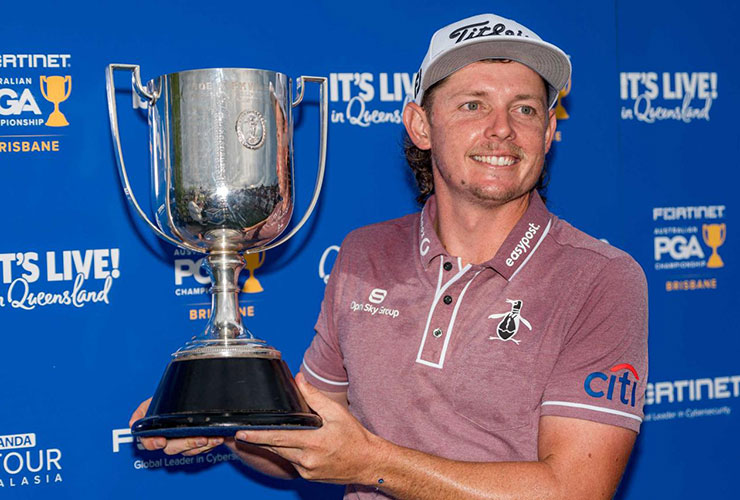 Smith’s win was his fifth in 2022, but the first in which so many family and friends could see it in person. Andy Cheung

No matter. Smith signed off on a whirlwind year with the Australian PGA Championship’s Joe Kirkwood Cup, which sat beside his Claret Jug in the clubhouse at Royal Queensland on Sunday night. Joe Kirkwood was an Australian PGA pro who is credited with putting Australian golf on the map, via his 13 PGA Tour wins in the 1920s and 1930s but also with a series of trick-shot events he held with Walter Hagen.

Those who sat by, and cradled the Claret Jug and Joe Kirkwood Cup on Sunday night included family, friends — and fans. High-profile Australian athletes also wanted a look at the Jug, like some of the rugby league football players from Smith’s beloved Queensland Maroons, past and present. One of them is coincidentally named Cameron Smith, considered one of the greatest players in rugby league history, and fellow icon Johnathan Thurston.

“The reception from everyone has been pretty outstanding,” Smith said. “Guys that I have look up to on the [rugby] field are coming up and asking me for a beer or a game of golf. It’s pretty cool.”

You may also like:
Cam Smith has a fantastic return to Oz
Tiger and Charlie Woods in PNC Championship field
Tiger set for rankings boost at Hero Open
Sergio Garcia to drop out of top 100
LOOK: Golf’s biggest turkeys of 2022
Rare data shows how dominant Tiger was some 20-odd years ago
All you need to know on the new golf rules for 2023
Cam Smith right at home at Australian PGA Championship
Gainer leads the way at LET finale in Spain
Adam Scott making big changes for 2023
Cameron Smith eyes winning return to Australia
‘I thought I was dying. How golf kept me going’
PGA Tour University star earns trip to Dubai Desert Classic
Jumeirah Golf Estates secures 10-year deal for DPWTC
City boss Pep enjoys World Cup break in UAE