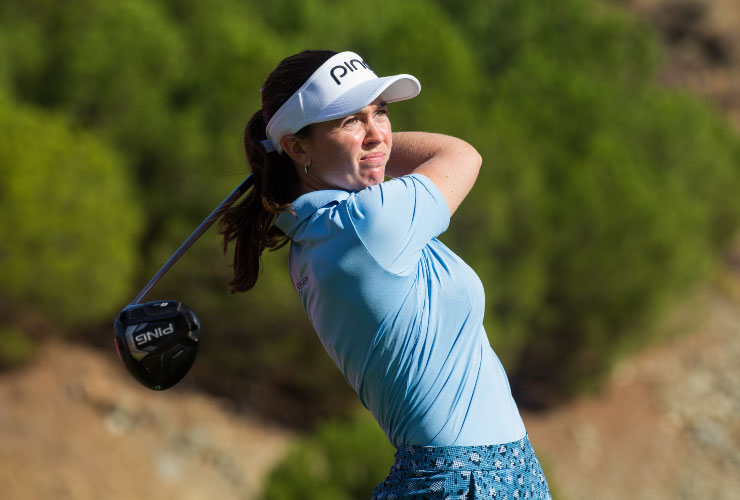 By Matt Smith
While Linn Grant and Maja Stark were fighting it out for bragging rights on the Ladies European Tour season-long Race to Costa Del Sol rankings race, it was Cara Gainer who was the unexpected leader after Day 1 of the Andalucía Costa del Sol Open de España at Alferini Golf.

The Englishwoman shot a 66 to take a one-shot lead over home hope Carlota Ciganda, signing for seven-under thanks to nine birdies and two bogeys.

“Overall, I’m really really pleased,” Gainer said. “I couldn’t have asked for a better start. I got it going, I was quite patient, I hit the ball lovely today and holed a few putts.

“It played very different to the practice days. We were having 20mph winds and we really had no wind today and it was a lot warmer. The ball was flying further, we had one or two clubs less in on every hole today which makes it a bit easier to hit it close.

“I would give myself a seven or eight out of 10 for the season. I’ve had some really solid results, but not quite all the way there. It’s nice to get off to a good start this week, still plenty of golf to go.”

It was a slow start for Ciganda but she got on a hot streak on the back nine rolling in six consecutive birdies to put herself firmly near the top of the leaderboard.

“I’m pretty happy,” said the six-time LET winner. “After that double bogey, I thought three or four-under was a good score today.

“I knew I had those two par-fives to finish so I thought if I could get a couple of birdies before 16 and 17. I started making some good putts on 13 to 18 and with six birdies to finish, I’m obviously very happy.

“I love playing here it’s so nice to see familiar faces, to see family and friends. I love playing in front of them. It’s always special to play in Spain as well, so I’m just happy to be here and finish the year here.”

Leader of the 2022 Race to Costa del Sol, Grant said: “I started off a bit nervous and stiff, I didn’t know what to do for the first couple of holes being two-over after three,” said the four-time LET winner. “I found something and got it going and finished on five-under which I’m very happy with.

“I think I built this tournament up a bit wanting to perform well and win. Going out there with Maja [Stark] and Carlota knowing that they would probably play good, I knew I had to play well as well and I think that pressure took over the first couple of holes.

“It feels nice to be ahead of Maja for now, even though I like to play with her, and she’ll say the same, it’s good to be one shot ahead going into tomorrow.”