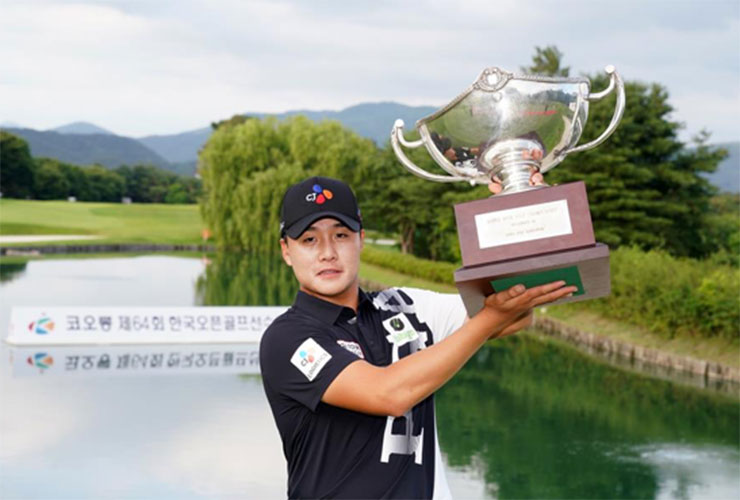 The 21-year-old Kim holed a 10-foot birdie putt on the 18th for victory in the play-off, which was played over holes 16, 17 and 18, on even par, while Cho made bogey to end one-over. It was a tremendous turnaround as Kim started with a par and a bogey verses the two pars his opponent had made to put him in control.

It is the first time that Kim ­— who won the 2018 Real Czech Challenge on the Challenge Tour, becoming its youngest-ever winner at 17 years, 64 days — has won in his homeland and his success was rewarded with an invite to The Open at St Andrews in July. Cho’s consolation prize is also a place in the elite field for the game’s oldest major.

Kim began the day three behind the overnight leaders Cho and another Korean Taehoon Ok but steadily worked his way through the field with a two-under 69 to set the clubhouse lead on four under, which included a bogey on the last.

Korean Hyungjoon Lee, playing in the penultimate group, look set to surpass that total and most likely win the tournament when he was five-under playing 18 but added to the drama of the day when he finished with a double-bogey after going out of bounds.

Thirty-three-year-old Cho then had a chance to win the 64th staging of Korea’s national Open in normal time with a 20-foot birdie putt on 18 but his attempt narrowly missed, and he signed for a 72 to send the event in over time.

“I can’t believe I have actually won,” said Kim, who has posted seven top-10s in his last 10 starts.

“I have come close to winning before and I wondered if I would ever win. I felt good on the back nine and started to feel I had a chance.

“Straight after I won, I thought of my father; I have to thank him for this. My golf is just beginning.”

On the final play-off hole, Cho hit an errant drive which forced him to punch his ball back into play while Kim assumed control after hitting his second over three green. Cho’s third found the edge of the green from where he played a poor chip to 25 feet. He proceeded to miss that while Kim got up and down for the most important birdie of his career.

“Winning is a difficult task. I think it was a good day, and I will move on,” said Cho. I am now planning to go and play in Europe for the first time, where, I am sure, I’ll learn a lot.”

American Jarin Todd closed with a 70 to tie for third with Lee, who returned a 71, one shot short of the play-off.