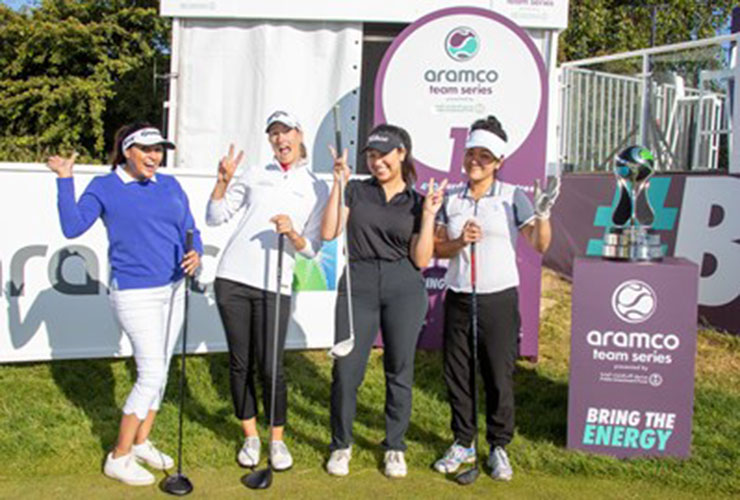 By Matt Smith
Three Saudi-based players were celebrating a podium place at the weekend in the Aramco Team Series — London ProAm at Centurion Club just outside London.

Led by Sweden’s player Johanna Gustavsson, amateurs, Hanin Anbarsari, Raghda Al-Issawi and Laila Al-Telmisani took third place in the light-hearted competition, thanks to a combined score of 26-under.

“I enjoyed this a lot and had a wonderful day full of funny situations and wonderful moments,” Gustavsson said. “This is my first time participating in an all-women team in the Aramco ProAm. I’ve seen a lot of great kicks from Saudi female players, although there are some who started golfing a little while ago, which is amazing. I hope they learned a little bit from me and that the advice I gave them was helpful, and I look forward to seeing more Saudi women golfers.”

Anbarsari, a Golf Saudi team player, added: “The overall experience was very special, I really enjoyed it, the great atmosphere and playing alongside my team members. It’s great to be around new faces and build relationships in this field. I’ve been asking Johanna as many questions as possible to take advantage of this experience, her way of playing and her vision of the stadium is absolutely inspiring.”

Al-Issawi, who played alongside her 18-year-old daughter, Al-Telmisani, said: “The future of golf in the Kingdom is very promising, and there is nothing impossible where we can reach with hard work. I try to stay away from the mother’s role while we golf and play as friends on the course. We had a wonderful time and learned a lot of things that will help us in the future.”