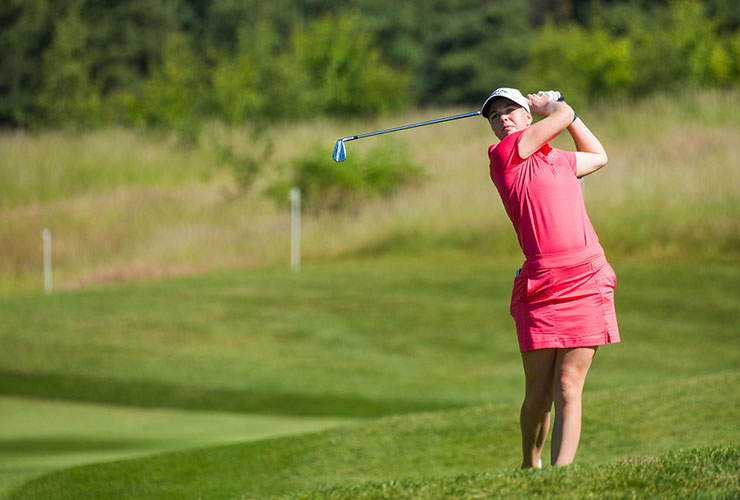 By Matt Smith
Sweden’s Linn Grant is back in familiar territory at the top of a Ladies European Tour leaderboard after skippering her fourball to a share of the Day 1 lead at the Aramco Team Series -— London, largely down to a sensational, triple-eagle seven-under 66 from fellow countrywoman and teammate Sofie Bringner.

Grant made history last weekend at the Scandinavian Mixed when she became the first woman in history to win on the men’s DP World Tour. And she is already on the trail of further success this week, captaining Bringner, Trish Johnson and amateur Peter Thompson to a 16-under-par opening round and a seat top of the pile, alongside Team Anne van Dam.

However, it was Bringner that provided much of the Thursday fireworks for Team Grant, making no less than three eagles en route to her 66 — a score that has also given her the outright lead in the event’s concurrent individual contest where she sits one shot clear of England’s Georgia Hall and Sweden’s Jenny Haglund.

Bringner holed a putt of almost 30 feet on the opening green and barely took a backward step on her way to a seven-under-par tally.

The 24-year-old — who started and finished her round with eagles — said: “I haven’t been in this situation so many times, so it’s new for me. But yeah, it’s very fun and I played good today. I made a few mistakes but made three eagles, so that was really fun.”

For a long time it looked as if Hall would surge clear after a birdie blitz saw her race to seven-under-par through 16 holes. At that point it seemed as if she might match the nine-under-par course record she set in last year’s event. But the 2018 Women’s British Open champion found trouble off the tee at the last and ended up salvaging a bogey from a front-right bunker.

Hall said: “I played pretty flawlessly, to be honest. I could’ve holed many more putts but I managed to hit a lot of good iron shots close that gave me some tap-ins.”

She added: “It’s the first time he’s come to an event in the three years we’ve been together, so it’s really nice to have him here and watch me. We did a bit of work yesterday, just on the long game, the down-swing — only subtle changes, nothing big. Hopefully he’s quite happy with the way I’m hitting it. It’s one of my best long-game performances in a few months. I was going at a lot of pins and you can be aggressive on this course.”

Haglund made a strong move late in the day, making birdie at four of her last five holes. England’s Bronte Law is also among the close pursuers, one back from two off top spot.  Law piled up nine birdies as she followed a top-six showing in the US Women’s Open.

“I wasn’t really aware of how many I had made,” said Law when asked about her long list of gains. “I was just going with the flow, enjoying it out there. I think any time you post a number under par you did stuff right. I’m hoping to kind of continue that.”

Charley Hull finished birdie-birdie to join a cluster of players tied for fifth at four-under-par. In among that group is big-hitting Van Dam who is well poised to mount a challenge in both the Aramco Team Series London’s solo and team contests over the next two days.

However, in the team element the Dutch ace and her teammates will need to see off the inspired golf of Team Grant. Its senior member is former Solheim Cup star Johnson and she summed up succinctly their opening-day feats.

Johnson, 56, said: “Just to watch these guys play is a dream. They’re both utterly fantastic. They hit some extremely amazing shots between the two of them and it’s just great to watch.”

The tournaments are famed for their unique format, in which three LET professionals play in teams with one amateur player.