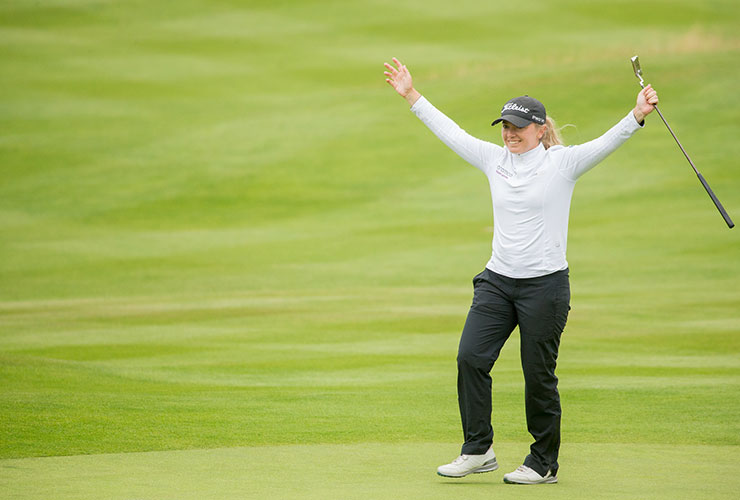 By Matt Smith
Bronte Law took the crown on a dramatic last day in the Aramco Team Series at Centurion Club with a sensational eagle from 55 feet on the final green to win by one stroke.

In a thrilling finale, Law powered past fellow English star Georgia Hall to close out at nine-under and scoop the $75,000 first prize.

Law needed a birdie at the closing par-five to match Hall’s and force a play-off. Instead, she did better, producing a moment of pure magic when she sank a monster putt for an eagle three that drew a huge roar from the galleries and secured her a second Ladies European Tour title.

There had been flashes of adversity in the final round for Law, not least at the 13th hole where she made double-bogey to slip from the leaderboard summit.

But the 2019 Solheim Cup star, who finished tied-sixth earlier this month in the US Women’s Open, showed her fighting qualities as she reeled off birdies at the 15th and 16th to haul herself back into contention.

Hall also had her foot down on the pedal – as did the late-charging Linn Grant. The Swede closed with six birdies in her final seven holes to take third spot, but it was Law who landed the most telling blow of all with that monster putt that saw her sign for a two-under final round of 71.

The victor added: “I’m competitive, I want to win. So I won’t go down without a fight. I never know that I’m going to end up with a win, but I will make sure I give it my alL in order to give myself a chance. I knew I had to battle. It’s never over until it’s over – I guess that kind of showed at the end there.” The team event – with a total purse of $500,000, like the individuals’ tournament – was similarly exciting. Team Garcia and Team Wikstrom finished on 27-under-par on Friday evening, resulting in the two captains returning today for a play-off down the 18th.

Unfortunately for Ursula Wikstrom, her tee-shot at the first extra hole drew an extremely difficult lie in a fairway bunker and she required two strokes to extricate herself from it. Ultimately that proved decisive as Nicole Garcia locked in a solid par to claim the $105,000 winner’s cheque, shared with her two professional team-mates Madelene Stavnar and Kelly Whaley.

Of course, there was a fourth member of Team Garcia – amateur Mia Baker. And, playing off a 16 handicap, she was a major factor in the success, sinking a tricky putt on the final green of regulation play the previous evening.

South Africa’s Garcia said: “Mia really helped us out and that’s what this whole tournament is about, getting involved with the amateurs and giving everybody the experience of a professional event.

“I’m really proud – it couldn’t have gone better. All four girls contributed equally. An experience like this is always going to bring you closer to your peers that you’ve played with.”

Reflecting on the experience of a lifetime and also her playing partners, Baker added: “It has been so nice and the best thing is they made me not feel stressed. I couldn’t have asked for anymore from them – they were amazing.”

This week’s London leg was the second of five $1million Aramco Team Series tournaments on the LET calendar this season, following last month’s Bangkok opener – and preceding events in Sotogrande, New York and Jeddah. The tournaments are famed for their unique format, in which three LET professionals play in teams with one amateur player.

From August 18-20, the Aramco Team Series will be in Spain at the magnificent La Reserva Club de Sotogrande.