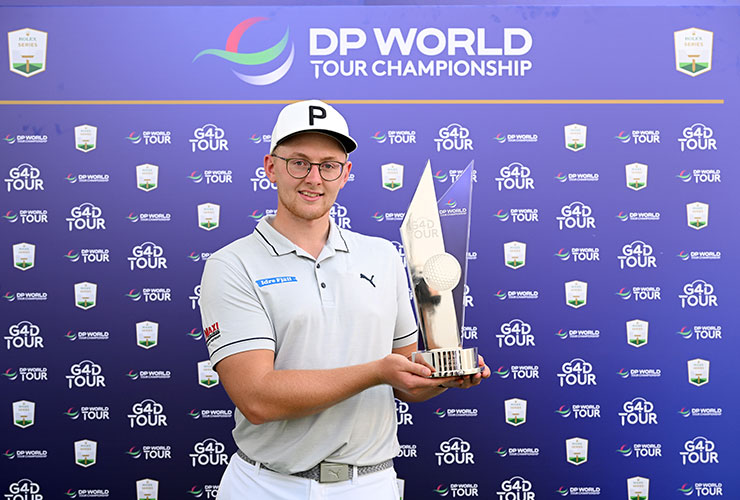 By GolfDigestMe.com
Rasmus Lia claimed his maiden G4D Tour title as he cruised to a four-shot win at the G4D Tour Finale @ DP World Tour Championship.

The Swede held a one-stroke lead over American Chris Biggins and Spaniard Juan Postigo Arce after day one at Jumeirah Golf Estates and fought off his nearest rivals with an assured level-par 72 at the Earth Course on Saturday.

He carded four birdies on a three-under par back nine to clinch victory with a three-over par total, with Biggins and Canadian Kurtis Barkley in a share of second place at seven-over.

“It was very exciting, special today,” said Lia, who was the only player to shoot level par or better across the two days of competition. “It feels unreal to be here right now.”

Lia began his final round with a birdie on the first for the second day running, but two bogeys and then a double bogey at the ninth saw him turn in 39 with a one-shot advantage over world No. 1 Popert, Biggins and Brendan Lawlor.

But with players on his tail on the back nine, Lia found his mojo to record three consecutive birdies from the 13th, before he cancelled out a bogey at the par-three 17th with a closing birdie to seal a deserved triumph.

“I definitely felt the pressure,” he said. “I didn’t look that much at the leaderboard but I had a feeling that it was going to be close. I made a few nice birdies on the back nine and managed to finish strong.”

Lia, who had his father Trond as his caddie for the first time this week, was one of eight leading golfers with a disability taking part in the final event of the inaugural G4D Tour season.