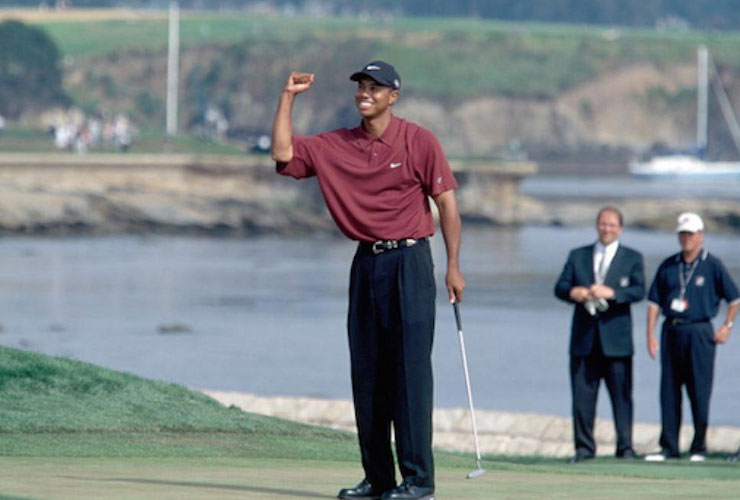 By Alex Myers
The major titles. The regular titles. The money earned. The cut streak. When determining Tiger Woods’ greatness throughout his career, there are so many ways to go. But in terms of encapsulating his dominance, this animated graph might be the best.

It comes from the great minds at Data Golf and it’s nothing short of jaw-dropping. Using overall strokes gained, the display charts the game’s best players since 1996, the year Tiger turned pro. And it makes it clear that Woods was a cut above the competition during his prime. A BIG cut above.

Have a look for yourself at the graph, which begins with Greg Norman leading the way at 2.6. But the Shark quickly dives off, paving the way for Woods, who won his first two PGA Tour titles (of 82 and counting) that year, to establish control at the top following his first major victory at the 1997 Masters.

From there, Woods leads in this category until the end of 2010, other than a brief period being surpassed by Ernie Els in 2003-2004 (Woods was beginning his swing coach transition from Butch Harmon to Hank Haney at the time). And most of the time, it’s by a wide margin. Check it out (bottom graph):

And the evolution in strokes gained since 1995, per @DataGolf 🐅 pic.twitter.com/m0A1i4vhjN

Absolutely amazing. Woods spent more than a decade above 2.6 strokes gained. Meanwhile, only Els was able to crack that mark in the past quarter-century.

Woods peaked by nearly gaining 4 strokes per round during his historic 2000 campaign in which he won nine times, including three majors. But gaining 3.6 shots in 2008 wasn’t too shabby, either.

Anyway, you get the point. Tiger Woods was the world’s best golfer for a long time, and it wasn’t even close. Of course, we didn’t need some fancy animated graph to tell us that, but it’s still pretty cool to look at.