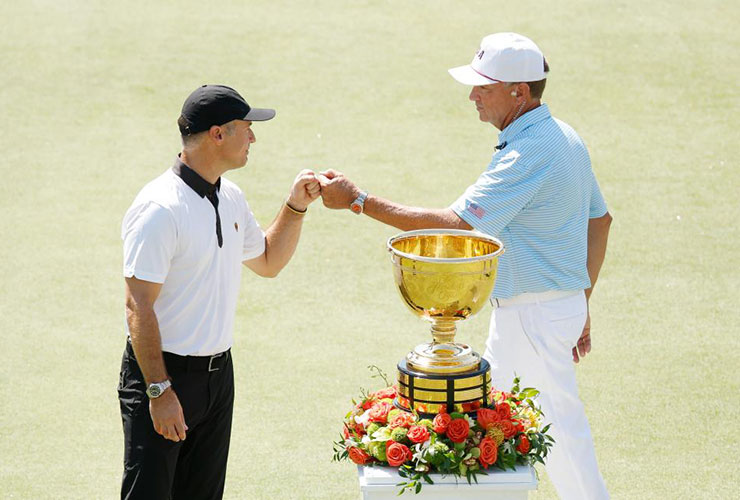 By Evin Priest
Trevor Immelman will send out an all-Australian and an all-Canadian pairing in the hopes his besieged International team can claw its way back into the Presidents Cup, after losing the first session 4-1 to “maybe the strongest American team ever assembled on paper”.

The star-studded American side won four matches during Thursday’s foursomes session to take a commanding lead at Quail Hollow. Cameron Davis and Si Woo Kim earned the only point for Internationals on Day 1, having defeated World No. 1 Scottie Scheffler and Sam Burns, 2-up.

Making the feat even more impressive was the fact that Kim and Davis were 3-down after seven holes. It was the first time since 2005 that the World No. 1 one lost his first match at the Presidents Cup. Tiger Woods and Fred Couples lost in foursomes to Adam Scott and Retief Goosen at Robert Trent Jones GC in Virginia.

Immelman rewarded debutant Davis by pairing him with countryman Scott, who joined Hideki Matsuyama in being hammered 6&5 by Xander Schauffele and Patrick Cantlay on Thursday.

“For [Davis and Kim] to finish strong like that to eke out a point for us really is big psychologically,” Immelman said after making his pairings. “If we got whitewashed today, it would have been a tough pill to swallow.”

Davis and Scott will walk out first for the visitors on Friday and they’ll face a tough task in Jordan Spieth and Justin Thomas, who will stay together after beating Corey Conners and Sungjae Im 2&1 in foursomes.

US captain Davis Love III didn’t split Scheffler and Burns despite the pair blowing their lead over Kim and Davis. The close friends will face off against Im and Sebastian Munoz, who Immelman rested on Thursday.

South Africa’s Christiaan Bezuidenhout was also rested on Day 1, but he’ll partner Mito Pereira to take on Kevin Kisner and Cameron Young. The formidable duo of Cantlay and Schauffele will square off against Matsuyama and Tom Kim.

Rounding out the fourballs session will be Billy Horschel and Max Homa against Canadians Corey Conners and Taylor Pendrith.

Immelman said the International team wouldn’t lick their wounds, rather will tuck into some South American cuisine and reset for the best-ball session.

“We’re looking forward to [South American food]; it’s been a long, long day. We’ll get back to the team room, have a little fun and regroup,” Immelman said. “The message [will] stay the same: play free.

“Nobody here expects us to win. We’ve got to have that belief, deep down. Go out there and fight. We’re up against maybe the strongest American team ever assembled on paper.”