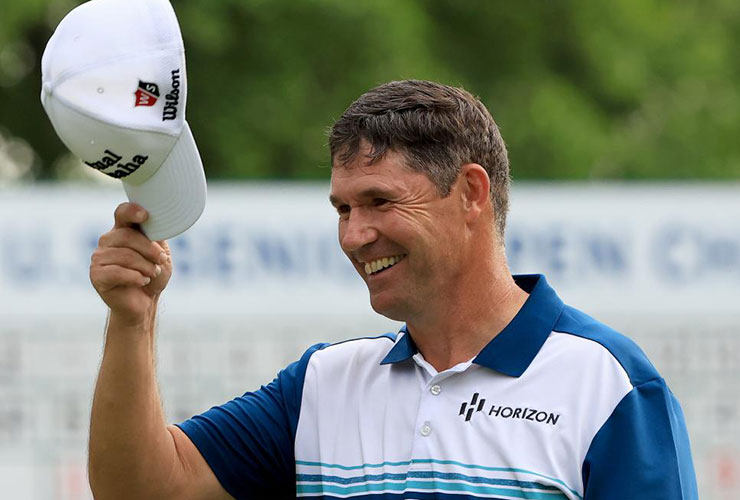 By Michael Bamberger
At the risk of wearing out this hit from a current playlist: The painful beauty of professional tournament golf lies in the adventures a golfer endures on the way to the bottom of the 72nd hole. That has been true for a hundred years and then some. Who can forget Walter Hagen at the 1922 Open Championship at the notorious Royal St George’s? Went around in an even 300. The installments have been coming steadily ever since.

Which brings us to Sunday. In Gee Chun by a shot at the LPGA Championship at Congressional. (Nice!) Xander Schauffele by two at Hartford. (Dude!) And then there was Padraig Harrington at Saucon Valley at the US Senior Open. (Paddy!) He managed three white-knuckle cross-country two-putts on 70 and 71 and 72 to win by a shot over Steve Stricker.

Your yipping correspondent, watching from close range, could barely breathe, so wracked with anxiety was he.
Harrington: 274.
Stricker: 275.

By the way, at one point in the tournament Harrington had a six-shot lead (just as Chun led by seven and Schauffele led by five).

Stricker posted 9-under early, after a stunning 65 on the par-71 Old Course at Saucon Valley, which features three 18-hole courses. After a birdie on 15, Harrington rode 10-under from 16 to the house. 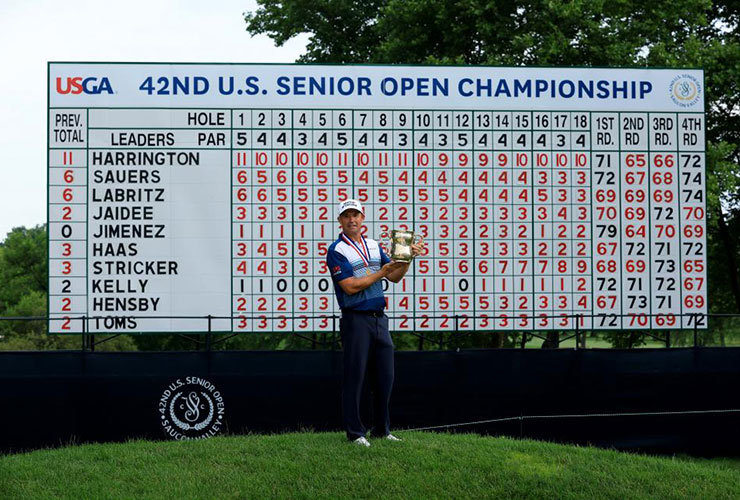 Maybe you saw the billboard on your way to the airport:

Tournament golf. Makes you feel alive. Pass it on.

This question comes to you from one of our new sponsors, Twilight Zone Golf Queries, makers of fine golf trivia questions:
Q: We all know that Phil Mickelson, at age 50, won the 2021 PGA Championship at Kiawah. Name two 2021 Ryder Cup captains who also made the cut in that championship.
A: Padraig Harrington (Europe) and Steve Stricker (United States).

“I wish Phil had played here — I would have liked to have the chance to try to beat him,” Harrington said on Sunday night, Sharpie in hand, signing country-club flags, as winners are always asked to do.

Here’s a foursome of great golf talkers active in the game today: Paddy, Geoff Ogilvy; natural-born talking genius Colin Montgomerie; and (by his own admission) Phil his own self. Maybe you remember Mickelson in the CBS booth with Nick Faldo and Jim Nantz at the 2020 PGA Championship: “Thank you, it’s nice to be here. There are three things I do well: play golf and talk golf.”

David Toms leans on memories to guide him to U.S. Senior Open victory

David Toms rallies to win the U.S. Senior Open by one on a treacherous Broadmoor course

Jerry Kelly stumbles, but holds onto a one-stroke lead over David Toms in the U.S. Senior Open

Dottie Pepper recalls her harrowing encounter with a black bear at the 2008 U.S. Senior Open at the Broadmoor