Jessica Korda playing in borrowed clothes thanks to lost luggage, but she’s just 1 back after Day 1 at AIG Women’s Open 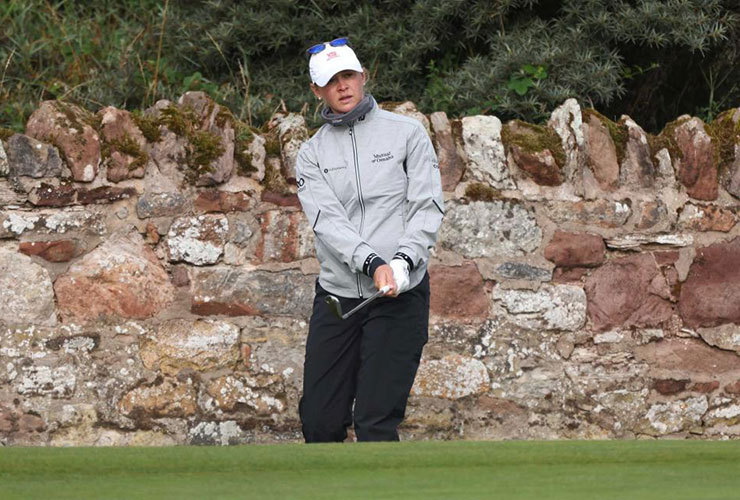 By Keely Levins
Lost baggage has been a common topic this year; we’re still scarred from the images of golf bags piled up at Edinburgh Airport after the Open Championship at St Andrews. Though Jessica Korda was able to keep track of her golf bag during her travels to Scotland for this week’s AIG Women’s Open at Muirfield, her duffel got lost in transit. The result? She’s been playing in borrowed clothes.

The mishap seems to have yielded some good luck: Korda opened on Thursday with a five-under 66, one shot off the leader, Hinako Shibuno. FootJoy sent her a box of clothes, but she’s still missing her logoed hats. She’s playing in a Muirfield hat.

The most frustrating aspect of this lost-baggage tale is that Korda knows exactly where the bag is. She has a tag on the bag that allows her to track its whereabouts, which is telling her they’re at the airport in Zurich. She just hasn’t been able to get someone at the airport to send the bag along to Scotland.

“So if anyone knows anyone at the Zurich airport that would like to put my suitcase on the one flight a day that they have coming into Edinburgh,” Korda said, “I’d deeply appreciate it.”

You may also like:
‘We just want to co-exist’: Lee Westwood opens up on LIV Golf
LIV Golf numbers grow on Asian Tour
Get the August 2022 edition of Golf Digest Middle East FREE here in English and Arabic
Legend John Daly ‘begged’ for LIV Golf spot
Mickelson was suspended by PGA Tour in March; banned for two years
Mickelson and Dechambeau lead group of 11 LIV golfers suing PGA Tour
Adam Hadwin in trouble with wife Jessica — again
LIV Golf gives to local charities in New Jersey
Bryson DeChambeau on LIV/PGA feud and his $125m signing-on fee
What it is like to be the first woman from your country to win a title
Five players to watch at the AIG Women’s Open
Australian army target more glory in Scotland
Laura Davies’ unique return to Muirfield
Phil Mickelson becomes highest-paid athlete of 2022
WATCH: LIV Golf highlights from Bedminster
Stenson takes debut LIV Golf title at Bedminster
LIV Golf takeaways after third event in New Jersey
The Gulf Club: Latest news from the UAE and beyond up to August 2022
Crocker takes the glory at Hero Open