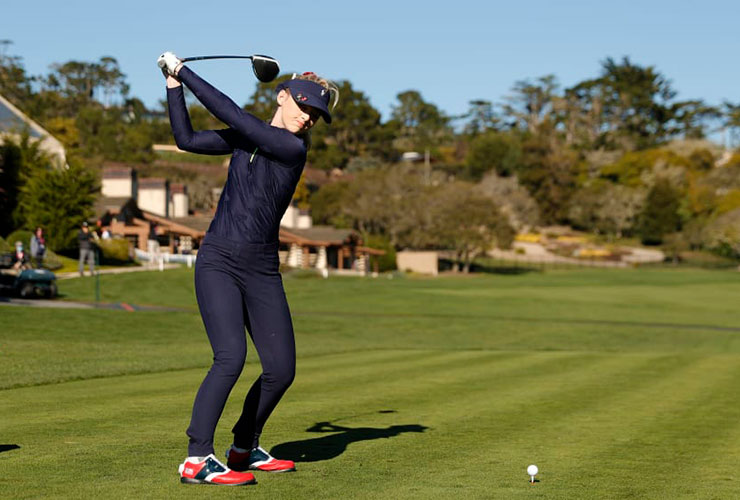 By Matt Smith
American actress Kathryn Newton has confirmed she will to make her debut this week in the DP World Tour’s ever-popular celebrity pro-am Alfred Dunhill Links Championship at St Andrews, Kingsbarns and Carnoustie.

Newton was a golfing prodigy at school but decided to give up thoughts of a sporting career to pursue her acting dreams. This week she will be teeing off at the Home of Golf in one of the most prestigious events in Europe.

The 25-year-old is best known for her starring roles as Abigail Carlson in the HBO mystery drama series ‘Big Little Lies’ and Allie Pressman in the Netflix drama series ‘The Society’.

“To be able to play St Andrews, the most historic course in the world, Carnoustie and Kingsbarns, in a fully fledged professional event will be a wonderful moment for me and I am really going to enjoy it,” she told the DP World Tour.

Newton has been golfing since she was a child. She began playing tournaments at the age of eight and was a member of the Notre Dame High School girls golf team, helping them to win three championships. She played to a plus-two handicap.

With a prize fund of US$5 million, the Dunhill Links incorporates two separate competitions — an individual professional tournament for the world’s leading golfers and the Team Championship in which the professionals are paired with amateur golfers, which creates a unique atmosphere.

Celebrities such as Boris Becker, Michael Douglas, Samuel L Jackson and Hugh Grant have taken part in the tournament in the past.

Danny Willett, the 2016 Masters Tournament winner, will be out to defend his title, with stars such as Rory McIlroy, Shane Lowry, Francesco Molinari, Billy Horschel, Padraig Harrington and Tyrrell Hatton in the field.