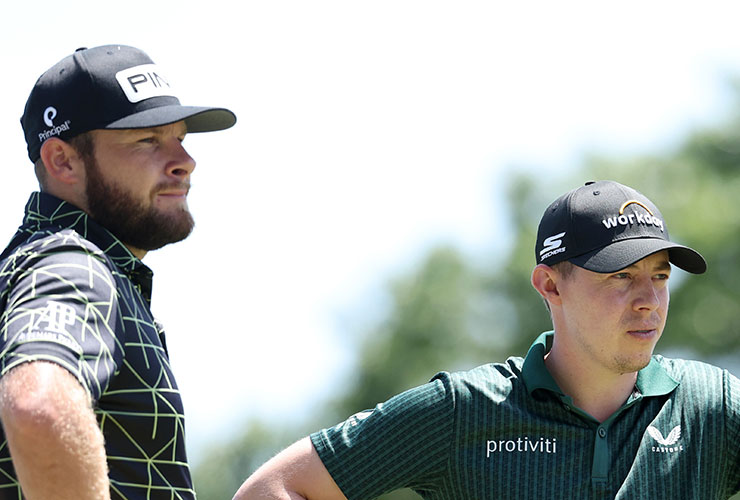 By Matt Smith
Matt Fitzpatrick came roaring out of the blocks in his pursuit of a third DP World Tour Championship crown on Thursday, carding a seven-under 65 on the Earth Course at Jumeirah Golf Estates.

A sizzling start from the Englishman included a stunning five straight birdies from the first before ‘only’ adding two more on the eighth and 14th to join 2021 Abu Dhabi HSBC Championship winner Tyrrell Hatton at the top of the leaderboard.

If things stay as they are, Fitzpatrick could also find himself as European No. 1, as the only two players above him in the DP World Tour Rankings standings — monster-hitting Rory McIlroy and Ryan Fox — posted one-under and one-over respectively.

Another of those in the Rankings reckoning, Tommy Fleetwood, is lurking tied for fifth.

Sweden’s Alex Noren is in solo third on six-under, while Dubai-based Spaniard Adri Arnaus is one stroke further back in fourth.

The lone American in the field, Kurt Kitayama, is alongside Fleetwood on four-under, with Rasmus Hojgaard, Yannik Paul and Callum Shinkwin for company.

Over the next three days, the top 50 players on the DP World tour will fight it out for the record $10 million prize fund and 6,000 Ryder Cup points.

“I said to my caddie: ‘When we won in 2020, didn’t we do four birdies in a row?’ said a hoarse Fitzpatrick (he is suffering from a severe sore throat) after his round in the Dubai sunset.  “Today we did five, so that is a nice sign.”

Fitzpatrick also claimed he was also focused only on his own game, and was not checking on McIlroy’s or Fox’s performance.

“I am just looking at my own score, one shot at a time,” he added. “I didn’t check on Rory or Ryan. That will take care of itself.”

It certainly will, and there will be plenty of thrills over the next 54 holes, with two titles on the line.

The DP World Tour Championship kicked off in style in front of packed galleries, with an Emirates A380 and Red Arrows flypast. The ‘Jumbo’ made its approach over Jumeirah Golf Estates this afternoon with seven RAF Red Arrow Hawk jets flying in a V formation to show off one of their world-famous synchronised performances.

As the group of aircraft flew at an altitude of just 1,000 feet over the skies of Jumeirah Golf Estates, the seven Red Arrows aircraft released red trails to signal the start of the action.