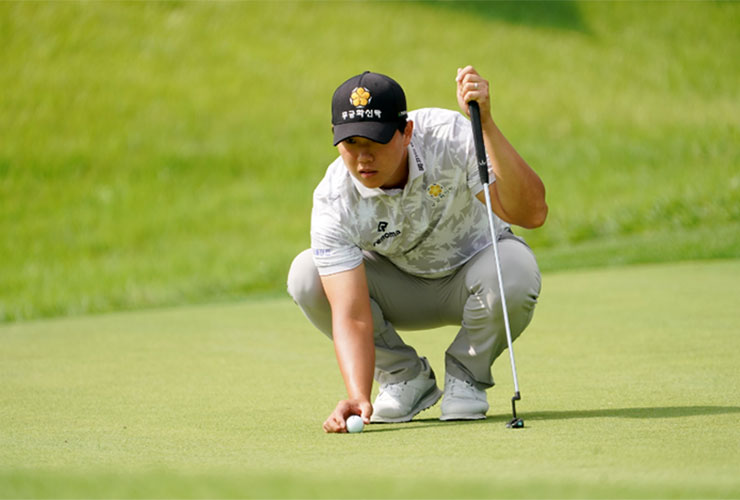 By Matt Smith
South Korea’s Sanghee Lee added a second-round three-under 68 to his opening 69 to take the halfway lead in the Kolon Korea Open at Woo Jeong Hills Country Club.

The home hope is five-under, one ahead of his countrymen Taehee Lee (66) and Taehoon Ok (69) and American Jarin Todd (69).

The event is worth just over $1 million and there is athe added incentive of two spots at the Open Championship in St Andrews to play for.

Sanghee has won four times in Korea but admitted that his national Open is the one that he really wants to win the most.

“I have claimed the NH Open, KPGA Championship, SK Telecom Open and GS Caltex Maekyung Open but the Korea Open is the big one we all want to win,” said Sanghee.

“I have challenged every year, but the results were disappointing. Thinking about it, I felt a lot of pressure. I felt a strain on myself, it didn’t work. On my day off from the army, I often watched Korean tour events and had a strong desire to get back playing again.”

He made birdie on the par-five 18th to take the outright lead to set up one of the most important weekends of his career.

He added: “Today, I did well despite difficult pin positions. My tee shots were accurate and my second shots were also very good but the putting wasn’t as good as yesterday. It was a bummer. I’m sad, but I’ll prepare well for the remaining two days and get a good result. It’s going to be fun.”

Taehoon took advantage of his early tee time to ease his way into contention. “I’m surprised to be in the lead,” he said after his round. “I made a double-bogey on the fourth hole and bounced back with a birdie on the fifth. The positions of the pins today were tricky.”

Todd looked set to also finish the day on five-under but found water on the last and made bogey.

“It’s always tricky out here,” said the American. “It got a little bit tricky on the back nine. It’s always hard here. I putted pretty good today, was missing on the right spots so I had the chance to get up and down. Bad luck there on the last with the lie and the wind gust but overall, a good day.

“The season has been good so far. I’m starting to get back into the flow. I didn’t play at all during the COVID break so it’s nice playing some of the bigger events now. There’s still a long track to go from here, two more days. A win here will be really fun, especially with The Open spot on offer this week. I came close to getting it in Singapore, finished top-five there. It was disappointing. I’d actually rather take The Open spot than the win this week! Just because it’s going to be at the old course at St Andrews and it’s on every golfer’s bucket list.”