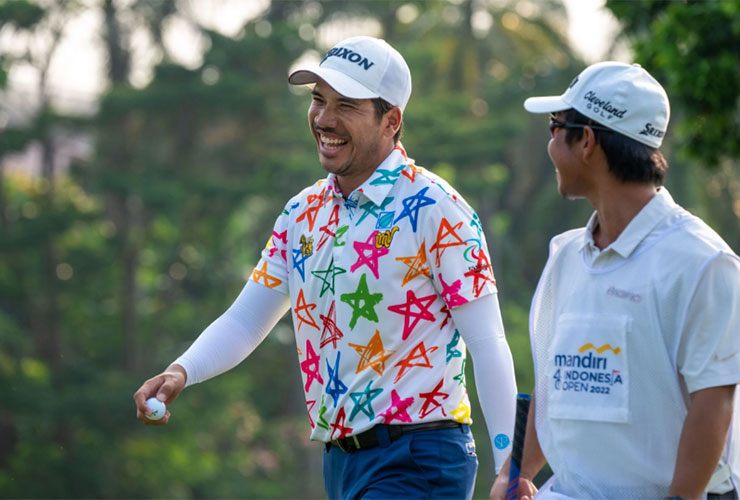 By Matt Smith
Thailand’s Itthipat Buranatanyarat said this week he has benefited greatly from playing in two star-studded LIV Golf Invitational events this year, and it showed today as he added a second round five-under-par 67 to his first round 64 to take the lead in the US$500,000 Mandiri Indonesia Open.

He leads the Asian Tour event on 13-under par at Pondok Indah Golf Course, having not dropped a shot in two days and carded 13 birdies.

South Korea’s Minkyu Kim, winner of the Korea Open in June, and American Berry Henson, chasing his first win on Tour in 11 years, both carded 67s to sit two back.

Weather delays on Thursday meant the event is playing catch up: 24 players were unable to finish on Friday. They include Hong Kong amateur star Taichi Kho, the joint-first round leader with Itthipat, and Chinese-Taipei’s Chang Wei-lun. Kho is 11-under with four to play and Chang 12-under with two to go.

“Today I started with not hitting my tee shots so well; I hit hooks on three holes in a row. But I tried to get my confidence back, and it came back,” said Itthipat.

“Then I started hitting the fairways so I could hit the greens. So today was one more round for me with no bogeys, bogey free again two days in a row. So yeah, I feel good.”

You may also like:
PGA Tour update as Rickie Fowler feels the pressure
Hearing date set for LIV Golf trio
‘We just want to co-exist’: Lee Westwood opens up on LIV Golf
LIV Golf numbers grow on Asian Tour
Get the August 2022 edition of Golf Digest Middle East FREE here in English and Arabic
Legend John Daly ‘begged’ for LIV Golf spot
Mickelson was suspended by PGA Tour in March; banned for two years
Mickelson and Dechambeau lead group of 11 LIV golfers suing PGA Tour
Adam Hadwin in trouble with wife Jessica — again
LIV Golf gives to local charities in New Jersey
Bryson DeChambeau on LIV/PGA feud and his $125m signing-on fee
What it is like to be the first woman from your country to win a title
Five players to watch at the AIG Women’s Open
Australian army target more glory in Scotland
Laura Davies’ unique return to Muirfield
Phil Mickelson becomes highest-paid athlete of 2022
WATCH: LIV Golf highlights from Bedminster
Stenson takes debut LIV Golf title at Bedminster
LIV Golf takeaways after third event in New Jersey
The Gulf Club: Latest news from the UAE and beyond up to August 2022
Crocker takes the glory at Hero Open