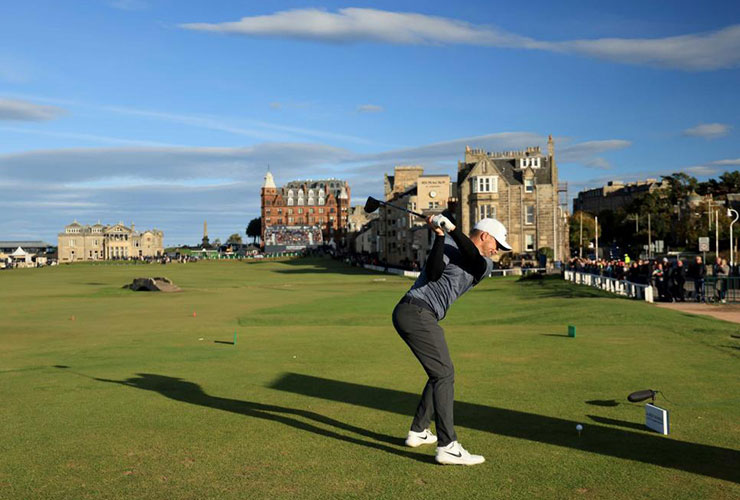 By Ryan Herrington
You hear an awful lot about the Golf Gods’ nefarious work when players get bad breaks. But we’re hoping Alex Noren woke up this Monday morning and came to fully appreciate the good fortune the shined on the 40-year-old Swede on Sunday at the Alfred Dunhill Links Championship.

Let’s recall the situation: Noren was on the 18th tee at the Old Course at St Andrews, 13-under for the tournament, two back of playing partner Ryan Fox and in a three-way tie for third place. Noren had to try to be aggressive on the iconic home hole of the Home of Golf, a reachable par 4 from the tee with a driver. Unfortunately, though, Noren’s aggressive swing started leaking right, which is the one thing you cannot, repeat, cannot, have happen off the tee on the 18th at the Old Course.

As the ball faded toward Links Road and appeared destined to land out of bounds, Noren got his kiss from above.

Alex Noren finds the green on the 18th after a VERY lucky bounce 😅#DunhillLinks pic.twitter.com/evG7ZwGdPK

How about that? Right off Rusacks Hotel! Now granted, the bounce could have wound up a little closer to the hole, giving him a better chance at a legitimate eagle try to see if he could catch Fox. But what resulted was far greater than the alternative. “You can’t even begin to think. If he holes that putt for 2 …” said TV commentator Jay Townsend, his sentence finished by a fellow broadcaster: “It would be the greatest break I’ve ever seen.”

Incredibly, Noren nearly did just that, missing the 67-foot putt he had by about a foot. He’d knock what was left for birdie to polish off the closing 69 and finished tied for second with Callum Shinkwin at 14-under, one back of Fox.

If you think this isn’t necessarily all that big a deal, consider the potential fall-out for this T-2 finish that might have been a T-4 or worse. Noren made €422,633.33, roughly double what would have been the case even with just a T-3 finish.

More importantly, with the T-2 showing, Noren jumped up from 56th in the World Ranking to 50th. Being inside the top 50 on October 3 doesn’t get you into major championships the way it would on January 3, but it’s a move that potentially will help Noren down the road as tries to secure spots into 2023’s biggest tournaments. He played in only the PGA Championship and US Open this year, missing the cut in both, and hasn’t played in the Masters since 2019.

Additionally, the T-2 finish jumped him from 60th to 23rd on the DP World Tour season-long ranking. He’ll easily be among the top 60 and qualify to play in the DP World Tour Championship in Dubai next month. He can now play the rest of the autumn in PGA Tour events (he has a card for the 2022-23 season having been in the top 125 on last season’s FedEx Cup ranking) in hopes of continuing to boost that World Ranking and set himself up for 2023.