By Matt Smith
As Dubai-raised Amelia McKee aims to secure her LPGA card for 2023 in Q-School this autumn — following her decision to turn professional this summer — the new opportunities are coming thick and fast.

The 22-year-old graduated from New Mexico State University this summer as part of their famed ‘Aggies’ golf team, and set out on her own journey in the unpredictable world of golf.

Following her safe negotiation of Q-School 1 in August, she is a step closer to achieving her life-long of teeing it up with the best in the game.

And she will get an early opportunity to rub shoulders with the likes of Nelly and Jessica Korda at Ferry Point, New York, before again playing alongside the cream of the ladies’ game in Jeddah. Also confirmed are legends such as Laura Davies and Emily Kristine Pedersen, along with stars like Charley Hull, Lee-Anne Pace, Carlota Ciganda, Ines Laklalech Maja Stark, Anna Nordqvist  and Bronte Law.

Arranged by Golf SAudi, Amelia has been confirmed for the pro-am Aramco Team Series’ final two events of the Ladies European Tour season — starting at New York on October 12, before the finale at Royal Greens in Saudi Arabia in November.

“It is just incredible,” she tells Golf Digest Middle East on the phone from her home in Texas. “I am so grateful to Golf Saudi. These events all go back to my love of golf and where it all began in the Middle East. To get this opportunity in the pro-am in New York and then Jeddah in November is surreal. It isn’t something I ever thought I would have at this stage in my career and I cannot wait.

“To be around some of the biggest players like the Kordas, Van Dam, Davies, Ciganda and Pedersen … it is actually happening, and I haven’t even got through Q-School yet!

“I want the other players to see that I am on their level and I do what they do. I want to be what they are and finally be able to say that I am there.” 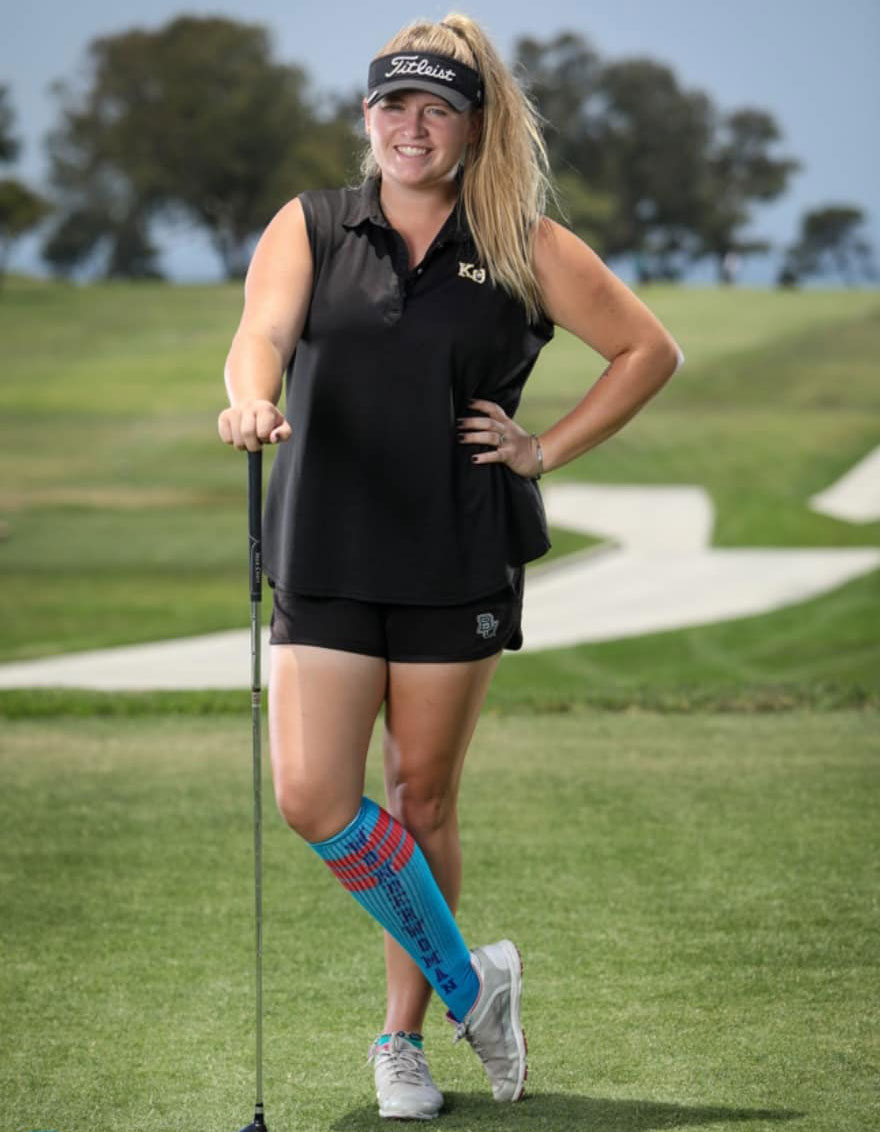 It has been an eventful year since graduation for Amelia, as she makes the switch from college golf to life on her own, with a little help from dad, who has been with her since her days as a youngster in Dubai.

“It’s been very different,” she explains. “It’s a huge change from college golf, which I think I will always miss from time to time. I miss my teammates, and my coach. But playing pro has been nothing short of a dream come true. Travelling, and playing as a career — especially with my dad on the bag — has been something I have been looking forward to since I was a kid. To look back at who I was 15 years ago, and be able to say: ‘I’m finally here’ is even hard for me to believe. I’m trying to take it all in as much as I can. It is honestly kind of emotional to think about.

“That ‘big dream’ a little seven-year-old talked about on the range at Hearthstone Country Club is finally a reality. It feels like forever ago, and just yesterday at the same time.”

With pro golf comes the financial difficulties of stepping out on your own, and Amelia opted for a GoFundMe appeal to help her get started.

“I was a bit sceptical about starting it in the first place,” she explains. “I didn’t want to come across as asking for hand-outs. After I had a few friends and family members ask me about making one, I decided that I should give it a shot and just see what happens. So many people became such a huge part of my career in just a few days. I was able to afford to go to stage one of Q-school after only 2 days of it being published. Otherwise I wasn’t sure how I was going to pay for it. I was a new pro and didn’t have many sponsors. But aunts, uncles, cousins, old friends, people I haven’t been around in years were all there to support me. It meant more to me than I could ever explain to them. Next thing I knew, my biggest donation yet came in and it was Abdullah Al Naboodah. That was huge for sooooo many reasons. He was such a big part of my success as a little kid living in Dubai all those years ago, and here he was again. Helping make my dreams come true. Because of all these amazing people, I was able to get through Stage I, and pay for Stage II! Anyone who follows golf, knows how big of an expense that is. I’m so grateful to all of them. They’re the reason I’m able to do this.”

Amelia has her own quirks on the course, including wearing one long sock and one short one while competing — and it is all for a good cause.

“It stands for inclusiveness,” she explains. “I was a teacher’s assistant for kids with special needs for a long time when I was a teenager. I have a cousin named Cora Jan, who has Down syndrome, and a very close family friend with a little girl who we call Doodles, who also has Down syndrome. I’ve spent a lot of time around those with disabilities, and they have always had a very special place in my heart. Being around them I saw how differently they can be treated by the community. I wanted to show them that being different does not make you any less capable. In fact, being different can be one of the most special things about you.”

Amelia goes back to the hard work at Q-School in Florida straight after New York, and she is prepared for whatever may come next in her career, and also how the whole thing will unfold following the damage of Hurricane Ian in the south-eastern US State.

“I’m not sure how Stage II will work after the hurricane,” she says. “They may have to move courses. I’ve heard that the course we are supposed to play has some pretty bad damage. But we will see what happens. Next steps really depend on what happens in Stage II. Best case, I make it through and start prepping for Stage III. Of course that is what we are hoping for. After that, I should have a higher Epson (feeder tour) status, and a few LPGA starts. I definitely plan on taking full advantage of that. If Stage III is where my Q- School journey ends (knock on wood), I will look into any and all possible options to get on a full-time tour. I want to try and get into a few LET and LPGA events, and maybe work toward status that way. Through Monday qualifiers and sponsor invites, I definitely think it’s an alternative path. I have a few possible sponsors in the works, but you never know which way the end result will go. I’m definitely going to need a few committed partners for it all to go as planned. So I’m working on that in the background as well. I’m hoping to secure those sometime soon, so I’m able to focus solely on my game for a while.”

It has been a full-on adventure for Amelia, over the past decade-and-a-half, and she is always happy to reflect on her time in the UAE and before, where it all began.

“Oh man, I could talk for hours about this but I’ll do my best,” she explains. “I started playing for fun with my dad when I was 7. At the time I lived in Houston Texas. It became an obsession over the next 6 months and I started playing in competition. I told my dad about a year later that I wanted to be a pro. He asked how serious I was and said: ‘I will help you get there, but sometimes you may not like me for it.’

“I’ll never forget that. But I owe most of my dedication and work ethic to him. Two years later (when I was 9) we moved to Dubai. They didn’t have a girls division. So I played with the boys. I met some of my best friends throughout those events. Over time, I got to watch Dubai create a girls division. That was incredible to watch and be a part of. I had the opportunity to play in a few pro-ams like the one for the Moonlight Classic / Ladies Masters at Emirates Golf Club thanks to Golf Digest and Abdullah Al Naboodah. Living in Dubai was the time in my childhood that really secured the fact that there was nothing in the world I wanted more than to play for the rest of my life. For that reason, the Middle East — Dubai specifically — will always have such a special place in my heart. I owe so much of who I am, and what I have become to that part of the world. It’s crazy to think that many people here in the US will never have to opportunity to see all that it is. I really hope to get back there someday soon, I miss it a lot.”

As if all this wasn’t enough for a whirlwind year, Amelia is also well advanced with wedding plans for December, where she will marry fiance and fellow sports star Chase.

“I get married less than a week after Stage III of Q- school,” she adds. “That is in December. Luckily Chase (my fiancé) is extremely supportive of my career, and works in MLB himself. So he understands the time commitment of a professional athlete. We are building a home in Magnolia, Texas, currently which should be done in October, get married in December, and the rest is history!”

Hopefully, some pretty cool history is on the way, Amelia.