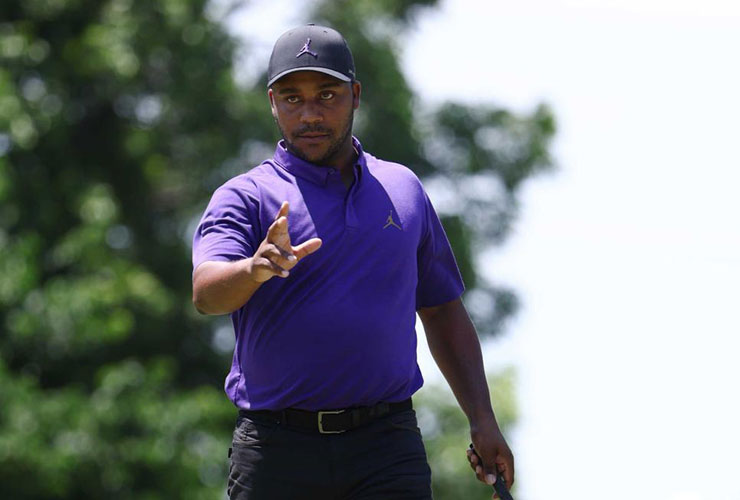 By Ryan Herrington
At the end of his third round on Saturday at the Charles Schwab Challenge, Harold Varner III offered this simple yet brutally honest take on the unpredictability of the final round of a golf tournament.

Unfortunately, Varner was more spot on than he could have imagined during a chaotic final round at Colonial Country Club in Fort Worth. On the tee at the par-4 12th hole on Sunday, Varner was two-under for the round and 10-under for the tournament, holding a share of the lead with Scottie Scheffler and playing partner Scott Stallings. Varner successfully found the fairway off the tee, but with a wedge in his hands he wound up burying his second shot in a greenside bunker, the whipping winds starting to pick up the pace even more.

As this was going on, Stallings hit his approach on the 12th hole over the green and needed a ruling to get relief from a TV tower. Varner played his third shot, blasting it out on the green but leaving himself a 19-footer for par, a putt he had to wait roughly 15 minutes to hit as Stallings worked to get his ball on to the green.

Finally, Varner was ready to try to hole his par putt. But that’s when things really went sideways.

A triple bogey for Harold Varner III to fall out of the lead. pic.twitter.com/MXkRk7XVIM

Varner four-putted from that position for triple-bogey seven and missed two putts in that sequence from inside four feet. That result then lingered, which explains what happened on the next two holes.

Double bogey on the next has Harold Varner III 4 shots back. pic.twitter.com/T0Ugr45aWI

On the par-3 13th Varner hit his tee shot into the water and walked away with a double-bogey 5. He then hit his drive on the par-4 14th out of bounds right. That set up another triple-bogey 7. In the span of three holes, Varner was eight-over par after being 10-under through his opening 65.

But that wasn’t the end of the roller-coaster. He impressively bounced back on the par-4 15th hole, when he hit his approach shot to five feet and made a birdie. After par on the 16th Varner made another double-bogey on the 17th and closed his miserable round with a bogey on the last. Varner shot 10-over 45 on the back nine, signed for eight-over 78 on the round and tumbled into a tie for 27th place.

While Varner was nine shots behind winner Sam Burns it still was another missed opportunity to grab his first PGA Tour win. He’s had a fine career so far without it, although a week earlier at the PGA Championship, the 31-year-old joined an auspicious club by becoming the 11th golfer in PGA Tour history to make $10 million for his career without a win.

PGA Tour: Rory McIlroy gears up for US Open with title defence at Canadian Open

PGA Tour: Billy Horschel wins the Memorial without much suspense but with an unforgettable moment