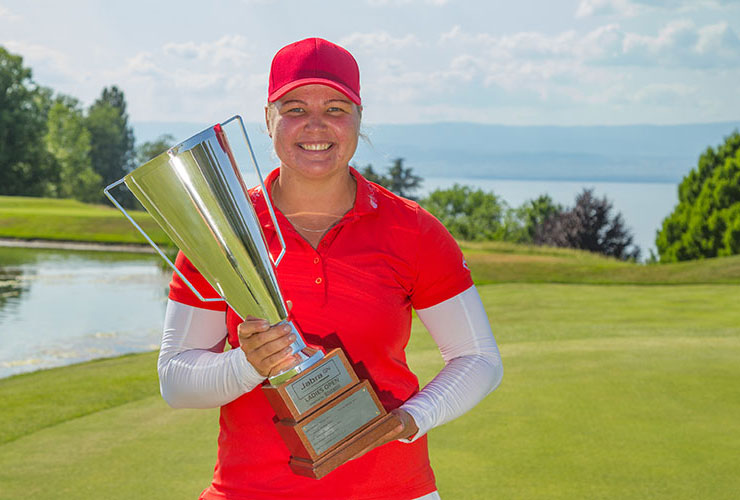 The 28-year-old fired a final round of five-under-par 66 to set the clubhouse target at Evian Resort Golf Club in France.

Hillier carded a 69 to join her on six-under-par after 54 holes, forcing a play-off down par-5 18th hole.

Fellow Finnish LET player Sanna Nuutinen joined Koivisto to act as her caddie for the play-off, returning the favour after Koivisto caddied for her when she won on the LET Access Series.

After claiming the title on the second extra hole, Koivisto said: “It  feels amazing. I actually made one of my first LET starts here in Evian and now I’ve won it, so I just can’t believe it.”

The win was also her first cut made in five appearances in the event.

“I’ve been putting so well the whole week and today I was hitting some good shots so I got the job done.

“I was checking the scores on 16 and before I hit my second shot on 18, so I knew I had to make a birdie there and I went for it.

“Sanna was caddying for me on the play-off hole and she’s one of my best friends so it was great to have her on the bag to make me more relaxed. We talked through all the shots. I knew that if I made a good stroke on the last putt I could do it, and when it went in, it felt so good.”

Koivisto also earned a place in the field for The Amundi Evian Championship, which will be her first appearance in a major. She also moved into fifth place on the LET’s Race to Costa del Sol Rankings.

While Hillier finished in second place, Leonie Harm and Johanna Gustavsson, who is getting married this week, tied for third position on three-under-par.

Pia Babnik, the defending champion, also fired a 66 and tied for fifth place with Carmen Alonso on two-under-par.