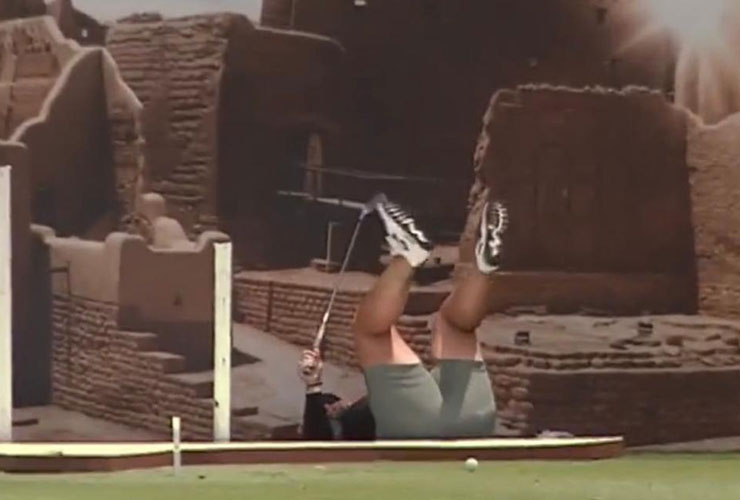 By Matt Smith
Amid all the high drama and $1 million on the line, there was a comedy moment at the Aramco Team Series — Bangkok.

It was something out of a slapstick ‘Carry On’ flick, and after seeing it, we’re not sure which was funnier on Saturday: the hilarious way Ladies European Tour star Chloe Williams flipped backward over a sign, or her reaction upon seeing replays of it. Call it a dead heat, because Chloe was a great sport about it.

The setup: Wales star Williams was lining up her tee shot on the par-3 sixth in the LET’s Aramco Team Series — Bangkok, and in the background were on-course billboards advertising the Saudi Arabian destination of Diriyah. The red sand and colours are right behind her and there was a small piece of wooden ‘rock’ behind the tee that gave the ads a 3D quality. As Williams backed up to visualise her shot, the facade clipped her at the knees, and she tumbled backwards, her legs flying up in the air.

The LET players are so accessible that an on-course reporter caught up to Williams later in the round — while she was still competing — to share the video with her. Williams got quite the kick out of it.

“I’m sorry, I’ve only just seen this,” Williams said as she watched the video on the reporter’s phone “Honestly, it’s just brilliant. I’m just glad I could contribute some fun for the group.”

The hardest part, Williams confessed, was that she still had the shot to hit while her partners were in hysterics. She smoothed a nice iron on to the green and made par. “I said to the girls, that was one of my best pars in history,” Williams said, still laughing.

In the 54-hole tournament, Williams closed with a 76 and tied for 52nd. The winner was Belgium’s Manon De Roey, who shot 66 to overtake overnight leader Patty Tavatanakit.