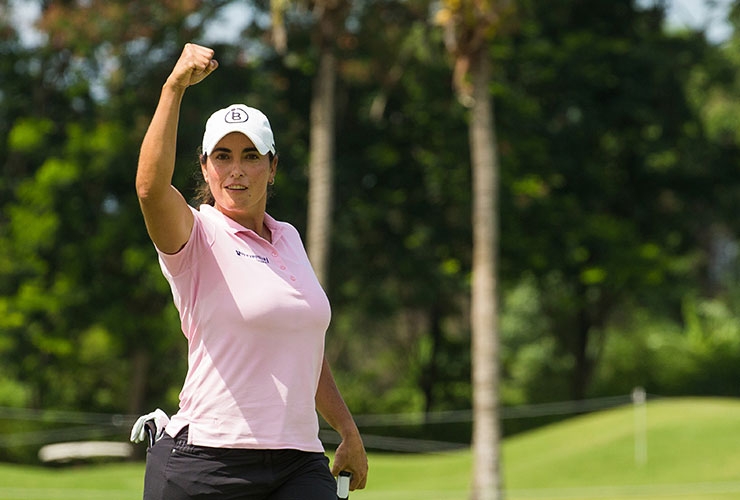 By Matt Smith
Spaniard Carmen Alonso took a one-stroke lead in the Jabra Ladies Open at Evian-Les-Bains in France on Thursday thanks to an opening five-under 66.

Alonso, 25th on the Ladies European Tour Race to Costa del Sol, had a poor start on the 15th after a shotgun start, but a birdie-par-eagle run before the turn got her in her stride and she added further birdies on the third and seventh holes before carding a second bogey on the eighth and then made further gains at the 10th and 14th.

“This course is really challenging, so you have to focus all the time. If you miss a shot, you don’t have too many chances to recover, so I’m really happy with the round,” said Alonso, now in her 18th year on the LET.

She was helped by fellow LET professional Maria Beautell on caddie duties, the pair having achieved a tie for 13th in the Comunidad de Madrid Ladies Open a fortnight ago.

“This year, I’m hitting the ball the same as in previous years but Maria is helping me around the greens, especially with the breaks,” Alonso said. “She is always positive, telling me that I am always doing a good job, so I follow her rules and it’s working.”

The winner of this week’s tournament will earn a place in the $6.5 million Evian Championship, the only Major in continental Europe, to be played in July at the same venue, and so there is fierce competition for the first prize.

Hillier said: “It was a pretty hot start, to be honest. I took advantage of the pure greens and just had fun out there. The course is in great condition and the weather is very nice, so I’m enjoying myself.

Johanna Gustavsson, Karolin Lampert, Carolin Kauffmann, Billie-Jo Smith and Leonie Harm are a stroke further back in a tie for fourth on three-under-par 68.

Gustavsson, who has recorded three second-place finishes already this season, commented: “I played quite solid. I hit some tee shots well and feel like I could have holed some more putts, but overall it was a nice, stress-free day.”

A win on Saturday would be a double cause for celebration for the Swede, as she will be going home to get married next weekend.