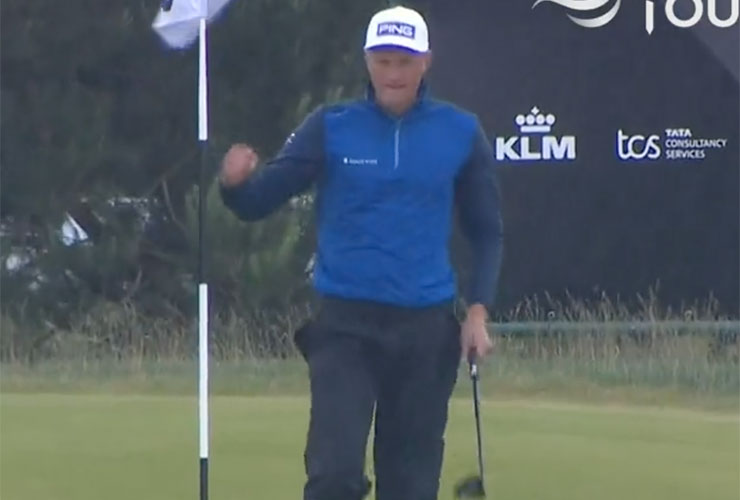 By Ryan Herrington
Adrian Meronk’s first victory on the DP World Tour will have to wait, his closing 68 at the Dutch Open still leaving him one shot short of playoff between Ryan Fox and Victor Perez (which Perez won on the fourth extra hole). But it’s not due to a lack of trying at the Netherlands’ Bernardus Golf on Sunday.

The Dubai resident is the first player from Poland to earn a card on the Tour, and he started the day two shots behind 54-hole leader Perez and started strong with birdies on the fourth and fifth holes. But on the 160-yard par-3 eighth, the 28-year-old’s tee shot found the water short of the green. It was a potential turning point moment of sorts, Perez and Fox both starting strong themselves. But with Meronk able to see the top of his ball partially appearing out of the water, he felt confident enough he could get his ball up on to the green rather than need to take a penalty shot.

Off then came the shoes and socks. Out came the wedge. With his 6-foot-6 frame, he looked particularly lanky getting into the water, which made what happened next even more impressive:

The best up and down you'll EVER see! 🤯@AdrianMeronk makes a remarkable par save at the 8th to stay at -10. #DutchOpen2022 pic.twitter.com/UrvFAklMl9

The clutch par save allowed Meronk to keep a clean card, and two more birdies on the back nine put some heat on the contenders. While Perez pulled out the victory, Meronk’s third-place finish was a pretty big deal too — it earned him a spot into the field at The 150th Open Championship since the event was one of the R&A’s Open Qualifying Series tournaments. Meronk has never played in the Open before and he will be the first Polish golfer ever to compete in the championship.

And if you hear fans at St Andrews refer to him as “Aquaman” you’ll know why.