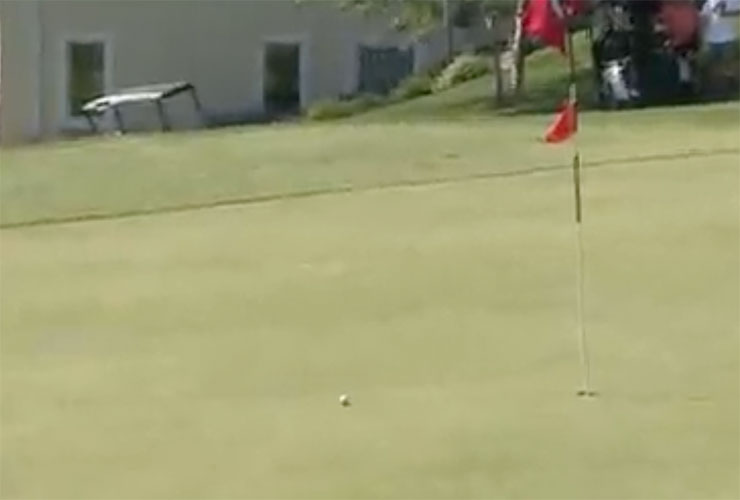 By Joel Beall
Apparently someone confused the dates of the superintendent’s revenge outing with the high school state championship.

The following video comes from Jake Brend, a news director at SCTV, who was covering the Iowa Girls 3A State Golf Tournament at the River Valley Golf Course in Adel. Brend’s video went viral after capturing what appears to be one of the most brutal pin placements you’ll ever see.

Putt after putt after putt continued to roll past the 18th cup, or in some instances come inches to the hole only to roll back and past its departure spot. The frustration on the competitors’ faces is palpable, and with good reason. The only things missing from the video were a windmill, clown’s mouth and the sight of Phil Mickelson running and hitting a moving ball.

Not sure if you can tell from this picture, but this is without a doubt the most difficult pin placement I’ve seen in my life of playing and watching golf.

I’ve seen numerous 10 putts and I would guess that the average score is at a sextuple bogey (+6). #iahsgolf pic.twitter.com/rSXnxtSdsr

According to Brend the average score on the hole was a quadruple bogey, with Brend reporting seeing some golfers take up to 10 putts to get the ball to disappear. Brend said the tournament took over nine-and-a-half hours to complete, with most groups spending close to 20 minutes on the 18th green alone.

Brend did add that the Iowa Girls High School Athletic Union was not in charge of the pin location. Which is a good thing, because whoever is responsible has some explaining to do.

The tournament was ultimately won by Rylee Heryford, who somehow escaped the 18th with only a bogey. Now that is a video we need to see.