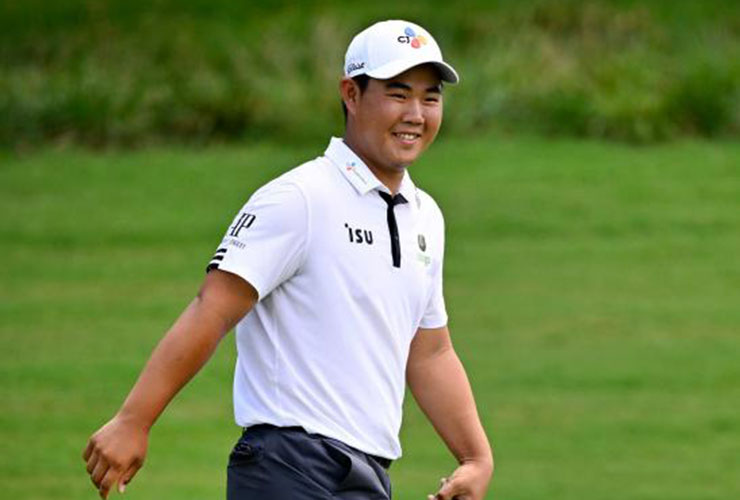 By Shane Ryan
Joohyung Kim’s nickname — “Tom” — is a reference to Thomas the Tank Engine, the character from the famous British children’s book who doesn’t possess the strength or pedigree of the mightier locomotives but finds himself overachieving in the railyard.

This, we’re afraid to report, is a wholly inapt and unacceptable metaphor for Tom Kim. Tom Kim is not a scrappy machine grinding his way up a hill. Tom Kim is a bullet train, and if his win at the Wyndham Championship on Sunday is the ascent that brings him to the attention of the general public for the first time, you get the sense that it is not nearly the most impressive peak he’s going to summit in his career. Far from a “little engine that could” character, what we’ve just seen is the coming-out party of a well-oiled iron horse, prepared for a kind of greatness that could come so fast that it makes us dizzy.

There are almost too many superlatives to attach to Kim’s remarkable five-shot win at Sedgefield Country Club after posting a 20-under 260 total. So decide, if you will, which one drops your jaw the fastest

“I’ve expected so much of myself and so does my team, we expect the highest,” Kim said. “And it hasn’t been the easiest. It might look easy for a lot of people, but it’s a lot of work behind the scenes. This is just a start for me and I still have so much I want to accomplish. I bought the car, we bought the car, we just need to drive it, so hopefully I keep pushing that pedal.”

Kim’s temperament reads friendly, and he calls himself a joker among his team, but acknowledged that he’s mature for his 20 years. He’s the kind of person who can talk about his immense work ethic in one breath, then describe his parents’ logistical duties in service of his career as a “pain” with an easy laugh.

He’s willful, too — he gave himself the nickname “Thomas” as a child because he was a fan of the show, but also because he didn’t accept that his parents had the full authority to name him. (He nearly went with “Buzz Lightyear,” and is grateful today that he decided against it.) 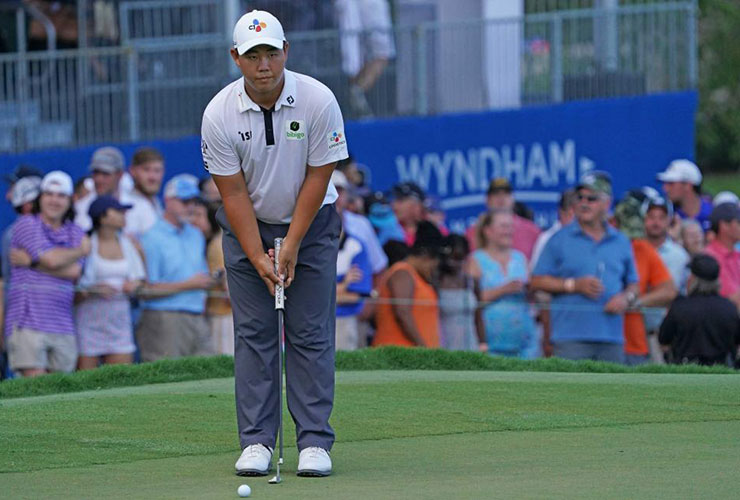 Golf is in his blood. His father Chang-ik Kim is a former tour pro who became a instructor, and Tom, whose English is fluent, spent parts of his formative years in places such as Australia, the Philippines, and Thailand.

With his 27 on the front nine, in which he made birdie or eagle on all but two holes, he leeched the drama out of the final regular-season event of the 2021-22 PGA Tour season, and turned Saturday’s crowded leaderboard into a Sunday runaway. Yet this performance didn’t come out of nowhere — he’s been on the winning scent all summer, where after dominating the order of merit on the Asian Tour and the Korean Tour since 2021, he turned in a third-place finish at the Scottish Open, and started his American career with a 23rd-place showing at the US Open before notching his first PGA Tour top-10 last week at the Rocket Mortgage Classic.

It certainly didn’t seem that he’d continue his ridiculous trajectory at the Wyndham. Not at least after he played his first hole. On Thursday, he posted an 8 to get things started without even taking a penalty stroke. It’s a testament to the red-hot state of his game that he’d almost fought back to even at the turn and finished the day with a 67.

A second-round 64 sent him toward the top of the leaderboard. Then on Sunday afternoon, he made his big move, draining putts of 20 feet, 24 feet, 12 feet, seven feet, and 18 feet in a five-hole stretch from 2 through 6 that he played in six-under. Two more birdies to finish the front nine gave him a four-shot lead, and though he cooled off with a bogey on No. 10, he played well enough on the back nine to hold off competitors Sungjae Im, John Huh and Russell Henley, none of whom ever really got close.

Kim clinched his PGA Tour status for next season with last week’s result — earning enough FedEx Cup points as a “non-member” — and that alleviated the pressure he felt at the Wyndham. Still, the pressure returned on the back nine, and despite the appearance of relative calm, his heart was pounding.

“I didn’t know golf could be this stressful,” he told CBS’ Amanda Renner. 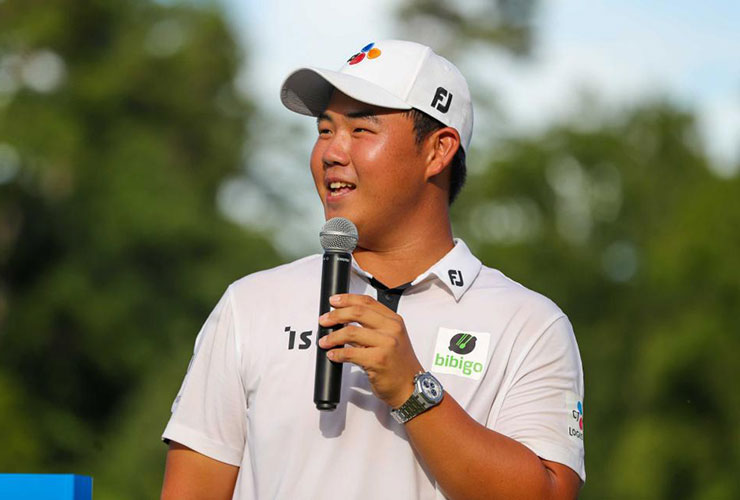 In his post-round press conference, Kim spoke about Michael Jordan and how he felt a certain connection in the air with this week’s tournament in Jordan’s native North Carolina.

“I’ve just been a big fan of people who have accomplished so much in their career. I don’t know any of them personally, but I’m a huge fan, just that Mamba mentality,” he said. “And I watched ‘The Last Dance’ probably 10 times just because there’s so many great quotes by him and there’s a reason why he was the best basketball player. Once it was confirmed this week he was from North Carolina and to win somewhere where he’s from, it’s an honour. He’s not going to know it, but like for me, it’s a little special thing in my heart. There’s so many great quotes by him.”

You wonder, though, if Jordan will in fact, know him, and if they have more in common than Kim might think. If nothing else, we know that Jordan is a fan of the team events, and along with earning his status and a spot in the Masters next year, Kim has put himself in a great spot to make the Presidents Cup team; International captain Trevor Immelman has already spoken to him. There’s a chance Kim might cross paths with Jordan in Charlotte.

For Im, who finished tied for second, the day was still a success, and a late surge to reach 15-under saw him rise from 15th to 10th in the FedEx Cup standings, sneaking into the final spot in the Comcast Business Tour Top 10 and earning a $1 million bonus. (Hideki Matsuyama, who opted not to attend the Wyndham, was bumped out by just 35 points.)

Given the Wyndham’s usual spot on the tour calendar as the Last Chance Saloon for pros to earn their spots in the FedEx Cup Playoffs, Sunday came with the attendant Top 125 bubble drama. Kim and Max McGreevy were the two players who started outside the bubble (in Kim’s case, he was technically inside, but needed the outright win to make the playoffs), and Austin Smotherman (who missed the cut in brutal fashion) and Matt Wallace were the two unlucky souls to fall out. Rickie Fowler, who along with Wallace and Smotherman missed the cut on Friday, barely hung on to the 125th spot, and will make the trip to Memphis next week.

The final in-and-out tallies never quite capture the full theatre of Wyndham Sunday, and that remained the case this year. Justin Lower seemed to have a two-putt to retain his PGA Tour card on the 18th green, and three-putted in gut-wrenching fashion. Doc Redman needed a great round to break into the top 125, and nearly got it, but in the end his 64 wasn’t good enough.

Even outside Greensboro, Tom Kim’s win had the domino effect of knocking four players out of the Korn Ferry Tour Finals and making their careers much harder than they seemed just hours earlier. With every missed putt, with every unpredictable surge, the reverberations were felt throughout the entire professional golf landscape, but it was the 20-year-old phenomenon Kim who was responsible for the biggest shockwaves. There will be more to come.