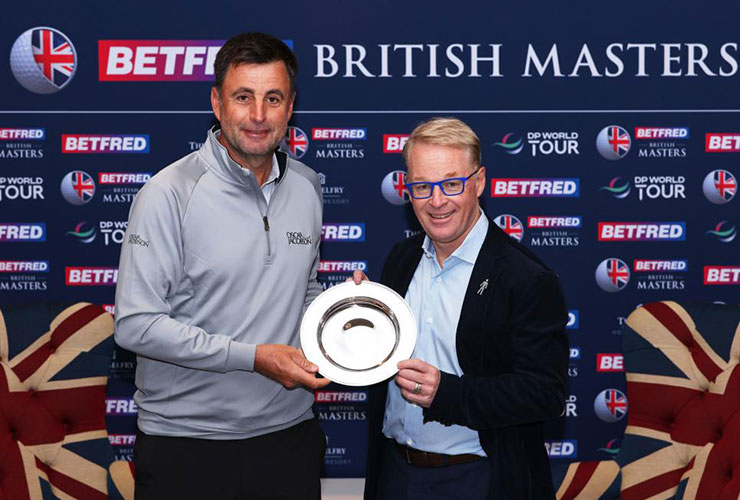 By Matt Smith
It was meant to be a celebratory weekend marking Richard Bland’s 500th DP World Tour appearance as he made his British Masters title defence at the Belfry.

But the 49-year-old’s announcement that he has requested a release to play in the money-spinning LIV Golf Invitational Series has put a different spin on the weekend at Sutton Coldfield.

The 49-year-old was asked if he had requested to play in the first of the Saudi-backed LIV Golf events at the Centurion Club, London, next month. He didn’t have a lot to say, but what he said was enough.

“I have,” said Bland. “And if it’s OK. That’s where I want to leave it. I want to concentrate on this tournament. I want to respect it. Right now, the DP World Tour is my 100 per cent focus this week. I want to make a good defence and we’ll leave it there if that’s OK.”

His chances are good this week. One year ago, the Englishman left the Belfry as the 134th best player on the planet, having just won for the first time in his 478th appearance. Today he is 53rd, testimony to his fine play over the past 12 months.

In the wake of his maiden victory, Bland grabbed seven more top-10s on the DP World Tour, including at the Slync.io Dubai Desert Classic. He led the US Open at Torrey Pines after 36 holes, was given the honour of hitting the opening tee shot in the Open Championship at Royal St George’s. By season’s end he was 11th on the DP World Tour money list. This year he lost out to Viktor Hovland in a sudden-death playoff in Dubai and made his (regular) PGA Tour debut at the Valero Texas Open, where he finished a creditable T-29. Heady stuff after 477 weeks of relative futility.

“What went on 12 months ago was obviously a dream come true,” said Bland, who lost his tour card at the end of the 2018 season and spent a year on the second-tier Challenge Tour. “It was something I had worked toward for 20 years. I knew I was getting closer to 500, so I looked at my schedule and tweaked it around a little bit. I didn’t play here and there to make it this week. Just to make it even more special.”

The Englishman became the oldest first-time winner in DP World Tour history, then aged 48 years and 101 days, when he claimed his maiden title with a play-off victory over Guido Migliozzi at the four-time Ryder Cup venue.

Now he has joined the likes of Lee Westwood and Phil Mickelson seeking release from the DP World Tour and PGA Tour to compete in the eight-event, $250 million LIV Series, ensuring that — win or lose — he will stay in the spotlight a little after Sunday’s final hole at the Belfry.

With more big names set to join the LIV ranks in the coming days including — if the rumours hold true — two of the biggest names in Ryder Cup history.

When the first tee shot is Played at Centurion in England on June 9, we are sure Bland will be up against as a strong field as ever.