R&A set for record crowds at St Andrews after more than 1.3 million apply for tickets 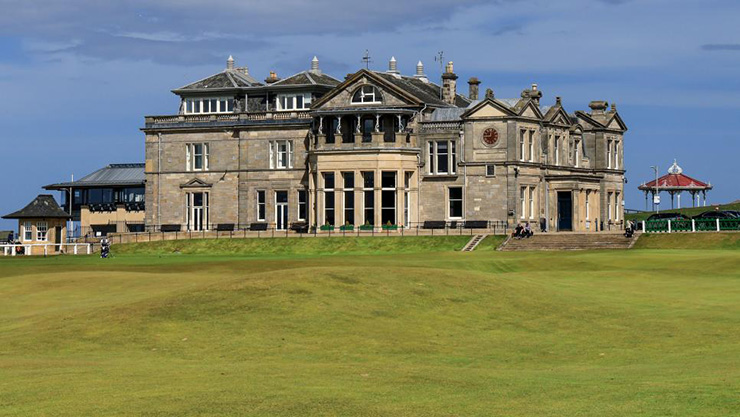 The Royal and Ancient Golf Club Clubhouse at the Old Course at St. Andrews will host the 150th Open in July. David Cannon

By John Huggan
ST. ANDREWS, Scotland — The biggest money-winner at this year’s Open Championship at St. Andrews is not going to be the “champion golfer of the year.” According to the event organizers, the R&A, that honour will go to the Scottish economy. It is estimated that the 150th playing of golf’s oldest championship (July 10-17) will generate as much as £200 million (approximately $340 million) in economic benefit to the host nation according to an independent forecast by the Sports Industry Research Centre.

“The Open Championship is a brilliant opportunity to showcase Scotland as the home of golf on a global stage,” said First Minister Nicola Sturgeon. “This is a historic year for the sport with five major tournaments [the Scottish Open, the Open, the Senior Open, the Scottish Women’s Open and the British Women’s Open] being hosted over five [consecutive] weeks this summer.”

Other Open numbers are bigger than ever, as the championship returns to the Home of Golf for the first time since Zach Johnson claimed the claret jug in 2015. After the R&A received more than 1.3 million applications for tickets— an unprecedented demand—attendance is expected to be the largest in the 162-year history of the event, with as many as 290,000 fans taking in the action over the course of the week. Practice days will see 80,000 gain admission with 60,000 on each day of the championship. The previous record of 239,000 was set at St. Andrews in 2000, with Royal Portrush a close second when 237,500 people attended Northern Ireland’s first Open in 68 years back in 2019.

“The 150th Open at St. Andrews is going to be a momentous occasion for golf,” claimed R&A Chief Executive Martin Slumbers. “That was clearly reflected in the extraordinary demand among fans to be part of the historic playing of the championship. We look forward to welcoming tens of thousands of fans from many countries around the world in July when they will enjoy a true celebration of golf at its historic home.”

With accommodation at a (typically expensive) premium in the “Auld Grey Toon” and the surrounding area, also making a return is the “Open Camping Village.” On what are normally the rugby and hockey pitches to the rear of the Old Course Hotel, 3,650 visitors will be accommodated. Almost 40 per cent of those attending the Open are younger than 25. More than 20,000 under-16s will be admitted free of charge as part of the “Kids Go Free” initiative.

What was the popular “Champions Challenge” will this year be played on Monday, July 11 with some modifications. As well as a sprinkling of past champions in the 48-strong field, women’s major champions, amateur champions and disabled champions will also be invited to participate in the four-hole (1-2-17-18) event. Playing in four-strong teams, two scores will count at each hole with each member of the winning side able to donate £10,000 to a charity of their choice.