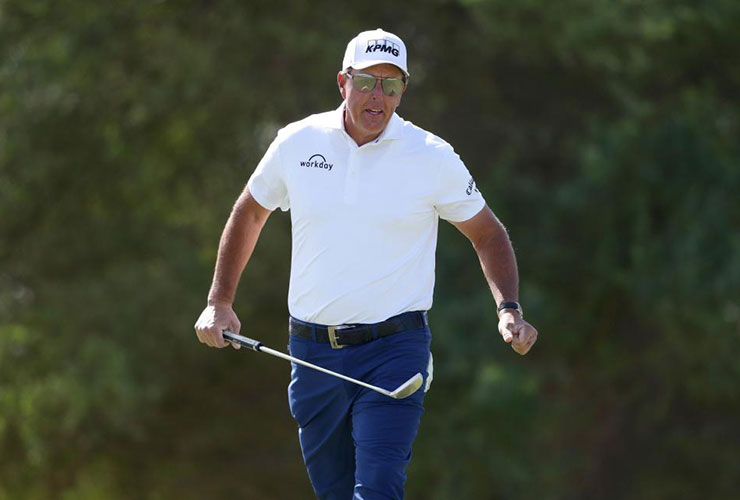 By Ryan Herrington
The amazing thing about the disappearance of Phil Mickelson since stating in February was taking time away from the game in the wake of his controversial comments about the Saudi-backed LIV Golf Invitational Series was the completeness with which his withdrawal from society seemed to take place. The common thought was that he was secluded in Montana (or was it Wyoming?) plotting his next move, but no one truly knew. Bryson DeChambeau and other friends say that Lefty had gone dark, hearing nothing from him and were as curious as the rest of us what he was up to. Had he grown a shaggy beard and a man bun? Had he turned into a coffee-drinking shorts-wearing mountain man?

This week, however, offered the first signs that Mickelson is indeed around and considering a return to life as a professional golfer. On Monday, his longtime agent Steve Loy released a statement saying that Mickelson has registered for next month’s PGA Championship, where he is the defending champion after becoming the oldest winner of a major at age 50 with his victory last May at Kiawah Island. He also has filed an entry for the US Open in June and requested from the PGA Tour a release to potentially compete in the first LIV Golf Invitational event outside London in early June. Loy’s statement came with a warning, however, not to presume when Mickelson might officially return to competition:

“Phil currently has no concrete plans on when and where he will play,” Loy’s statement said. “Any actions taken are in no way a reflection of a final decision made, but rather to keep all options open.”

Rumors of Phil Mickelson’s demise have been greatly exaggerated. He had plenty of speed yesterday at Rancho Santa Fe Golf Club. pic.twitter.com/N3NhqwEA6v

On Wednesday, however, video surfaced of an actual Mickelson sighting … on a golf course!

The Fire Pit Collective says it was from Rancho Santa Fe Golf Club in California, so he’s at least returned from secluded cabin life. The question now gets more interesting: When might Mickelson play in a tournament again? The first round of the PGA Championship starts in three weeks at Southern Hills, which would seem to be enough time to get his game into some kind of playing shape. If that didn’t work for some reason, the inaugural LIV Golf event is three weeks later at Centurion in London, buying him more time to decide how to reacclimate with the least amount of fuss.

Mind you there are dozens of other questions, too, most notably: Has he reached out to PGA Tour Commissioner Jay Monahan to talk about possibly playing again on the PGA Tour? (Recall that as of March, according to Monahan, the two had not spoken.) Or, as The Telegraph reported, has Mickelson committed to playing all eight LIV Golf events in 2022?

For now, we’ll all take a Phil sighting, even if just two seconds of semi-grainy video, with the knowledge that it reignites everyone’s favourite Mickelson game: “What will Phil do next?”

Phil Mickelson made a brilliant, big bet on Jon Rahm against a fellow PGA Tour pro

Phil Mickelson tried to hole a 78-yard shot with a putter from the fairway and, well, the results were interesting

Ryder Cup 2018: Phil Mickelson asks for a stroke a side from Tiger Woods, Patrick Reed tells him it’s not enough