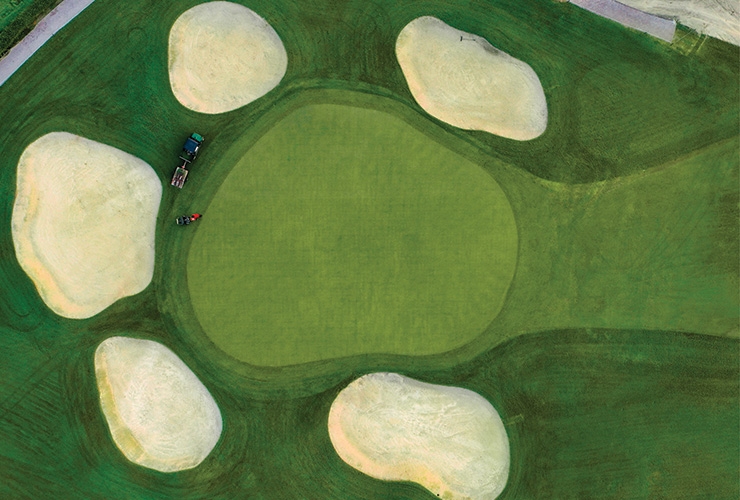 By Kent Gray
Emirates Golf Club has gone right back to the beginning to secure the future of the most recognisable greens in the Middle East.

Members began putting the Majlis’ fully renovated greens on September 30 with October 17 slated as the day that the green fee paying public can experience the new surfaces for the first time.

All 18 greens and the practice surface beneath the club’s iconic Majlis clubhouse have been fully renovated to USGA specification. They’ve all been brought back as close as possible to the original shape and size specified by designer Karl Litten when the region’s first grass course was built in 1988. That means members and visitors will have their lag putting tested with the greens increasing in size by an average of 40 percent. The Majlis bunkers previously didn’t have built-in drainage, impacting playability throughout the day as greens were irrigated and water filtered into the sand. Every greenside bunker was renovated alongside the greens overhaul, a process impressively achieved in-house in just two weeks.

Originally built as ‘push up’ greens and subject to the region’s high-stress climatic conditions, the greens had come to the end of their natural 20-25 year lifespan.

Aptly-named American Terry Baller, who has significant global experience with many top design companies, was brought in as design consultant and Tifeagle Bermuda grasses flown into the UAE in refrigerated containers from Atlas Turf in Georgia in the U.S.

Dubai Golf took advantage of the five-month course closure/rebuild to add drainage to each of the Majlis’ greenside bunkers and level out teeing grounds. A major tree trimming programme was also undertaken, bringing much needed light and air circulation to areas where grass growth has proven problematic.

“The team have done a tremendous job under the guidance of [superintendent] Matthew Perry to return the Majlis to the condition and standards expected of such an important course,” said Dubai Golf CEO Chris May.

“On bringing the greens back to the sub base by removing 60- 70cm of the previous greens, the original shape size and contours of the Karl Litten design was evident, so members and guests playing the Majlis will notice very subtle changes in movement and slope on the greens as they have been returned to their original design.” 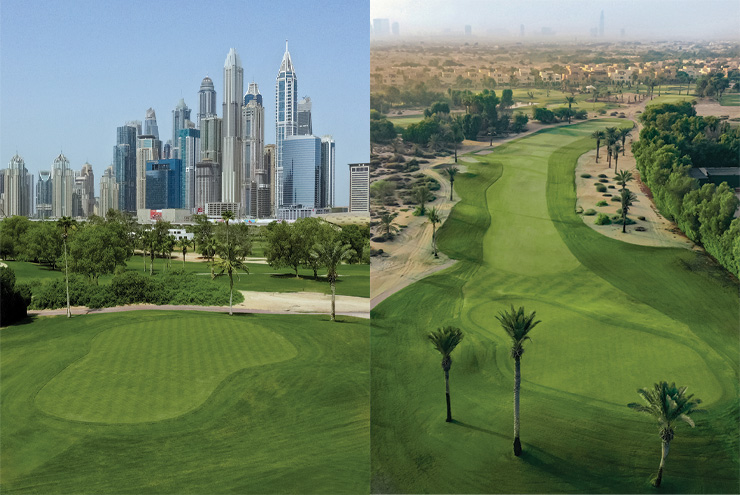 The upgrade was timed to allow nearly four months of bed-in time before Emirates G.C. hosts the 33rd Slync.io Dubai Desert Classic, itself enhanced to $8 million Rolex Series status in 2022.

“The thing to expect over the coming months is that the greens will get quite hard as we want them to develop and build organic matter,” Perry told members in a recent edition of Club Life, Emirates G.C.s newsletter. “We won’t be needle tining as it will loosen the surface too much. The ball roll will be good. There may be the odd jump here and there, which would simply be down to some areas of the greens that is still settling.

“It is very important to make sure we repair pitch marks as it is young grass [which] needs to be given a good amount of time to recover… not fixing these pitch marks straight away will prevent that.” 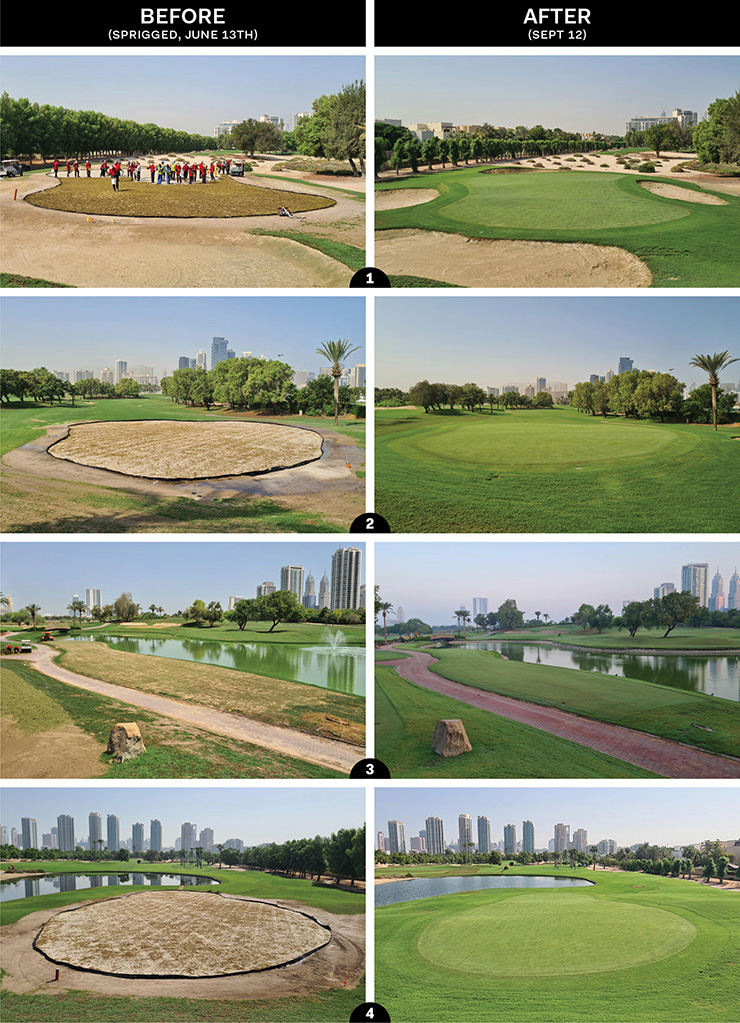 1. The 11th green on the Majlis course at Emirates Golf Club highlights the rapid progress of the renovation. 2. The 1st green in similar before and after photos. 3. All the tee complexes were flattered, including the picturesque 7th, one of the best par 3s in the region. 4. The 5th green comes at you after one of the Majlis’ trickiest drive-approach combos.

Baller is likewise pleased with the outcome of the renovation.

“Due to the nature of construction and corresponding disturbance to each green complex, we wanted to maximise enhancement opportunities that maintained the original design intent and strategy,” said the American.

“We were able to identify green surfaces that can benefit from enlargement while simultaneously enhancing bunker/green surface relationships, reducing severely sloped areas to promote playability and increase pinnable areas, and improving the overall drainage of green surfaces and areas surrounding the green perimeter by tying into the existing grade more suitably.”