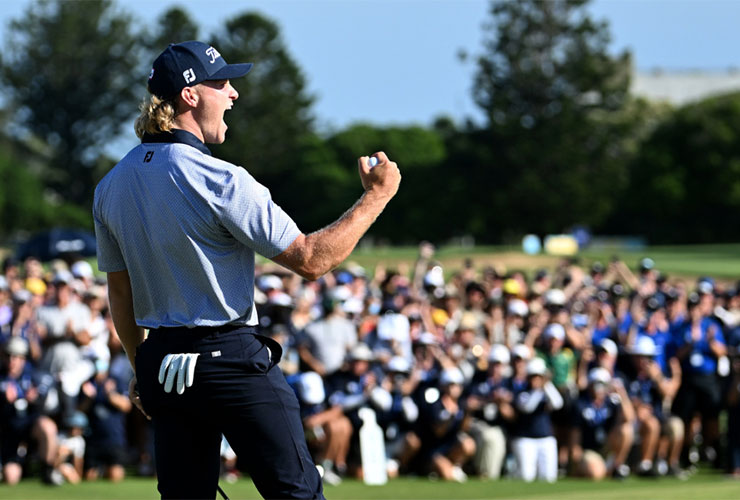 By Matt Smith
Greg Norman’s LIV Golf Invitational Series has another confirmed competitor as PGA Tour of Australasia Order of Merit winner Jed Morgan has confirmed he will play in the opening event at Centurion, England, ahead of the US Open in June.

Morgan has already been confirmed as the Australian Order of Merit winner with one event still to go, thanks to his victory in the Australian PGA in his home of Queensland in December.

With the Order of Merit crown safe, the 22-year-old is now looking abroad for bigger opportunities and, unlike some of the DP World Tour and PGA Tour players, Morgan does not need to request a release from his tour to play in the lucrative LIV Series, which is worth $250 million over eight events.

Other players who have confirmed they are set to compete include PGA Championship winner Phil Mickelson and DP World Tour stars Lee Westwood and Richard Bland.

Morgan is now eligible for his US Open bow at Brookline next month, immediately after the first LIV Series competition from June 9-11. He will also compete at the 150th Open Championship at St Andrews in July.

As Morgan is not on the DP World Tour or PGA Tour we will not require permission to play in the Saudi-backed event.

“As this point I don’t need any permission,” Fox Sports Australia quoted Morgan as saying.

“I’m not worried. I shouldn’t have any issues at all — I’ve got no affiliation with Europe or the US. The opportunity with LIV is just insane.

“Having a couple of tournaments to lead up to the US Open will be nice. You always play your best golf after you’ve had a few tournaments to work out where you head’s at.”

Morgan is set to join the DP World Tour next season.

“I’m heading away to follow my dreams and I’m focused on what is ahead of me, but to win an Order Of Merit is something special, and the opportunities that it provides for me are priceless,” Morgan added.