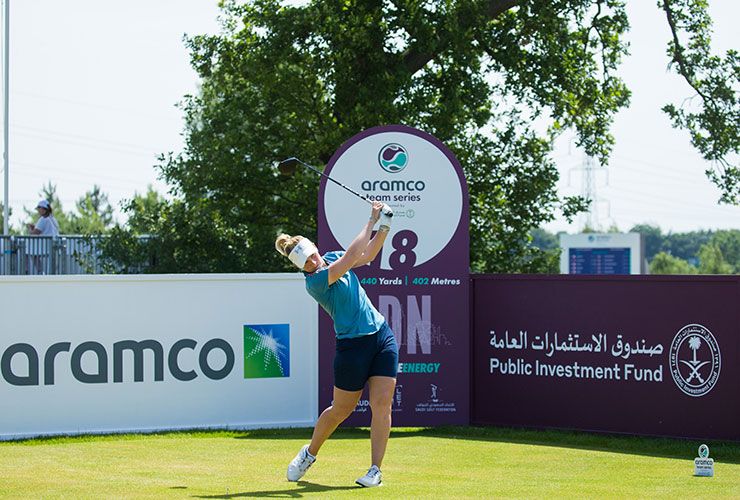 By Matt Smith
Hayley Davis is an Aramco Team Series specialist – but on Saturday she will ll go in search of a first individual title at Centurion Club.

The English golfer holds a two-shot lead from fellow countrywoman Bronte Law, while Georgia Hall is a further stroke back alongside Sweden’s Caroline Hedwall.

Davis, 29, was an Aramco Team Series winner in Sotogrande last year when she also finished second in New York and seventh in Jeddah.

Now thanks to two superb days’ golf she holds the lead in the $500,000 solo event at nine-under. Davis took advantage of the benign early-morning conditions to add a second-round 68 to an opening 69. She packed in seven birdies to give herself a great chance of victory.

Davis said: “I really like the Aramco team events. It seems to sort of bring out the best of my game. Last year I had a good record in them. I guess I just love team golf.

“We didn’t have the best day as a team yesterday.  We just couldn’t really get anything going. So I think we went out there today like, ‘Let’s make some birdies and try and move up’ and that’s what we did. I don’t think I really rolled in long putts. I’ve just been hitting it really close. I know that I hit a few inside six feet.”

As for the final round, she has extra incentive to go for it. Davis had mentioned to her niece that she might come to her football tournament tomorrow afternoon but now has her own glory to chase. Davis added: “I need to play well – I think that’s the only way my niece is going to accept me not being there!”

Law finished tied-sixth a fortnight ago in the US Women’s Open and once again is back in contention after moving to seven-under, courtesy of a second-round 71 carved out in a swirling afternoon wind and furnace-lie conditions.

Law said: “It was good – I played really solid. I’m just hoping that I can convert more of those chances tomorrow. I’m happy with where I’m sitting right now.

“I’m not really looking at the top of the leaderboard and worrying about who’s there. I’m looking at my scores and going, ‘Okay, I’m going to post a low number tomorrow’ – at least try and put myself in a position to do so – and then we’ll see what happens.”

Hall was round in level-par for the day but knows that she is right in the mix going into the final 18 holes.

The 2018 Women’s British Open champion said: “Three back is nothing. So obviously I’ve still got a massive chance and I’ll just see where I am after the front nine. But it’s a course where you can make a load of birdies.” 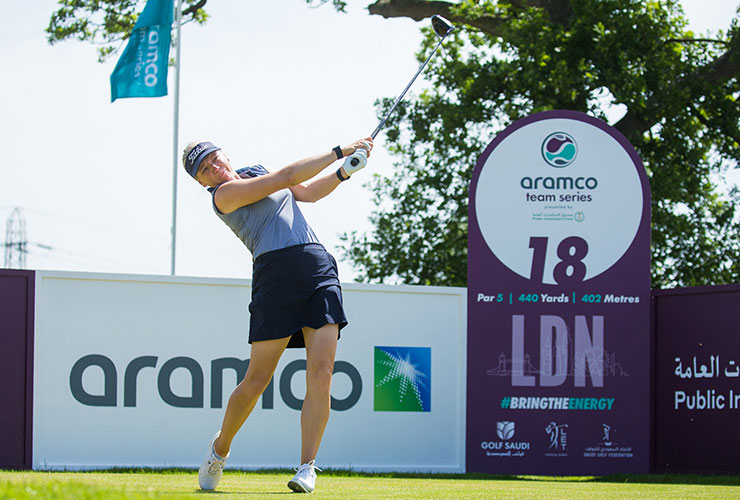 Team captain Ursula Wikstrom during the second round. Aramco

The $500,000 Aramco Team Series event will be settled by a sudden-death play-off after play has concluded in Saturday’s individual competition.

Ursula Wikstrom’s early starting quartet led for most of the day at 27-under but they were joined at the top in dramatic circumstances as the sizzling sun started to dip.

On the final green it was left to amateur Mia Baker in Team Garcia to sink a nerve-jangling putt and force extra time.

The 24-handicapper, playing off 16 in this event, held her nerve in superb fashion, holing out to huge cheers from the gallery.

Baker, who has only been playing golf for just over two years, said: “I was shaking! My caddie helped me – he gave me the confidence I needed. I couldn’t be a professional – it’s much too hard! They are very impressive. If anyone has the opportunity to play with pros they should definitely do it. It’s unbelievable.”

Her captain Nicole Garcia said: “She had a six-footer on the last for a play-off – I mean, the poor girl! But she came through. It wasn’t the only one that she saved us on. She made a long putt from off the green on 16 to save par for us.”

The play-off will be contested by one player from each quartet and the individual from each team will be nominated tomorrow.

The tournaments are famed for their unique format, in which three LET professionals play in teams with one amateur player.

Saturday sees the lowest-scoring 60 players and ties battle it out for a share of a further $500,000.