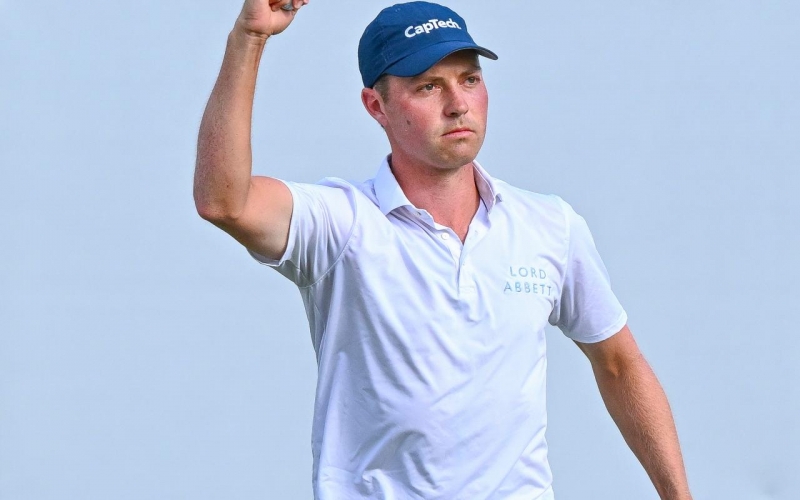 By Tod Leonard
It’s already been an extraordinary year for Ben Griffin. The 26-year-old out of North Carolina earned his first status on the Korn Ferry Tour for the current campaign, and with three second-place finishes on his tab already, he’s in third place in the standings and well on his way to competing full-time on the PGA Tour in 2022-23.

With all that, you may never see Griffin more out-of-his mind excited that he was on Saturday during a casual round with friends in St Simons Island, Georgia. Through 17 holes on Sea Island’s 7,093-yard Plantation Course, Griffin stood at 12-under. He’d opened his round going birdie 3, birdie 3, birdie 2, eagle 3, and when he made another eagle at the par-4 ninth, he’d shot 28 on the front. Then he birdied 10, 14, 16 and 17.

On the par-5 18th, Griffin needed a birdie, but judging by the video shared by friend and pro golfer Harrison Shih, he must have gotten into some trouble, because his fourth shot is from the fairway. And with the video rolling, Griffin swings the club, the camera (rather shakily) moves toward the hole, and then the group erupts in celebration after the ball went into the hole for the more-magical-than-most 13-under 59.

Shih posted the moment, along with Griffin’s scorecard and Monday Q Info gave it a bigger audience.

An hour later, Griffin tweeted, “Haven’t blacked back in yet. Wild.”

And the feat needs one more piece of context for how wild it was. A year ago, Griffin had seemingly given up the dream. He was working in as a loan officer in a mortgage group. At that point, he’d made less than $3,500 in nine starts on the KFT and had only three PGA Tour starts, making one cut. The PGA Tour was a distant dream.

Now, it’s as if Griffin is never going to wake up.

You may also like:
Xander on his way to three in a row in Scotland
Tiger takes a stroll around St Andrews
Spieth shoots down LIV Golf rumours
Ciganda on brink of wire-to-wire win in Spain
Tringale holds onto Scottish Open lead
Fitzpatrick enjoying ‘best form of his life’
Hovland reassures all weekend golfers with horrendous shank
Record prize money at 150th Open Championship
Ciganda holds halfway lead in Spain
Dubai’s Chiara Noja reclaims LETAS Order of Merit lead
Kang to miss more events due to tumour
Rory calls for LIV/PGA talks
Scottish Open is links golf at its finest
Tringale shapes up nicely at Scottish Open
Ian Poulter won’t trade jabs with LIV haters, says there’s ‘space in the calendar for everyone’
Meronk on top of the world at Mount Juliet
Grace shines in Portland