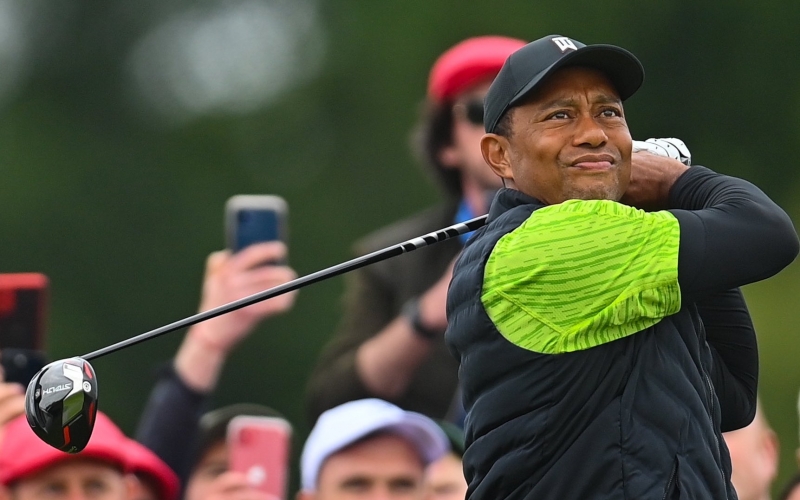 By Ryan Herrington
There was no sounding of the alarms on Twitter over the weekend, no wild frenzy from fans watching anxiously to see if a certain iconic golfer’s private jet had taken off for a trans-Atlantic flight. Unlike the Masters, PGA Championship and US Open, Tiger Woods had never been coy about his intent to play in the upcoming Open Championship at St Andrews. He’s called the Old Course his favorite in the world, and it’s a layout that would seem well suited for a 46-year-old still recovering from significant injuries to his right leg after his horrific car accident in February 2021.

Before arriving in Scotland and the Home of Golf, however, Woods is making one early stop. Shortly after playing the Masters in April and stating that he had his sights set on St Andrews, Tiger also announced he was committing to competing July 4-5 in the JP McManus Pro-Am at Adare Manor in Limerick, Ireland.

Given Woods’ limited schedule as he continues to recover from his injury, it’s only natural to ask — What is the JP McManus Pro-Am? And why is Tiger playing in it?

After all, Woods struggled with fatigue when he played at the Masters in April, finishing 47th, and the PGA Championship in May, withdrawing before the final round. He skipped the US Open in June to rest up for the Open. Why then play a week ahead in a pro-am?

Well, this isn’t just this isn’t any pro-am. The two-day event is hosted by McManus, an Irish businessman and philanthropist who owns, among other things, Adare Manor, which is scheduled to host the 2027 Ryder Cup. McManus, 71, first put on the pro-am in 1990 and has held it every five years through 2010. Tiger has previously played in it in 2000, 2005 and 2010.

The event, meanwhile, has been an impressive fundraiser for charities in the region. According to the pro-am’s website, €140 million has been raised in the first five events. The pro-am was scheduled to be held for a sixth time in 2020, but was delayed due to the COVID pandemic, making this year’s event a much-anticipated return.

And just how popular is the event? Well, the field of pros is a who’s who of golf that would make the PGA Tour, DP World Tour and LIV Golf officials jealous. Nine of the top 10 players in the World Ranking are competing, and roughly 30 of the top 100 players, each paired with three amateur partners.

The list of pros competing isn’t the only thing that’s impressive. There are also some recognisable names among the amateurs, including Niall Horan of One Direction fame, Jamie Doran and Bill Murray. Also playing is PGA Tour Commissioner Jay Monahan (his pro is Tom Hoge and other amateurs are Johann Rupert and Phil Hogan) and DP World Tour CEO Keith Pelley (his pro is Brandon Stone and other amateurs are Guy Kinnings and Keith Waters).

Woods is playing with Irish businessman Michael Smurfit, Tony Smurfit and Sharon Smurfit. The family’s company once owned the K Club outside Dublin.