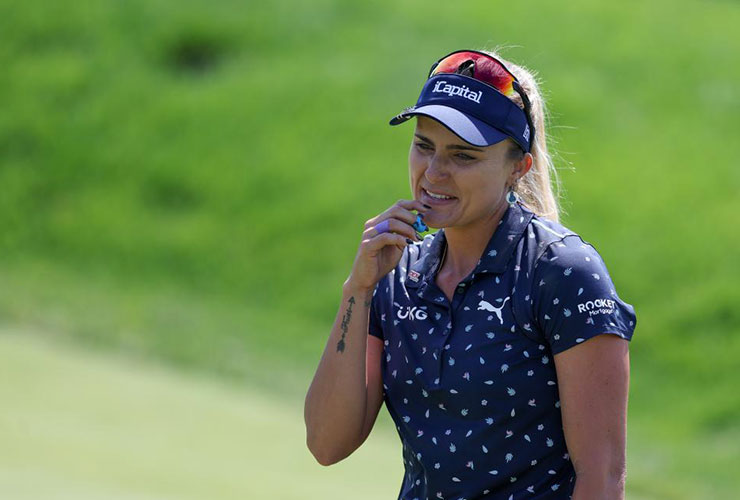 By Jay Coffin
Lexi Thompson held a two-shot lead during the final round Sunday at the KPMG Women’s PGA Championship, but made four bogeys in a six-hole stretch at Congressional and ended up one shot behind In Gee Chun, who claimed her third major championship.

Thompson was emotional, not having time yet to process all the costly missed putts in the previous hour, when tournament officials alerted Thompson and playing partner Hye-Jin Choi that they’d been fined $2,000 for slow play.

Choi and Thompson were playing with Chun in the championship’s final grouping on Sunday and the whole group was put on the clock with only two holes remaining.

The issue created instant social media buzz, including from two-time major winner Justin Thomas who tweeted, “I’m all for helping slow play, but putting those ladies on the clock with 2 holes left trying to win a major seems like a good read the room situation and don’t put them on the clock.”

I’m all for helping slow play, but putting those ladies on the clock with 2 holes left trying to win a major seems like a good read the room situation and don’t put them on the clock 🤷🏽‍♂️

Choi was not in the mix at the time and stumbled to a 76 and tied for fifth place with four others. Thompson tied for second place with US Women’s Open winner Minjee Lee.

Last year at the US Women’s Open at The Olympic Club Thompson lost a five-shot lead during the final round and finished one shot out of a playoff between Yuka Saso and Nasa Hataoka. She’s had nine runner-up finishes since her last LPGA victory, the 2019 ShopRite LPGA Classic.

You might also like
WATCH: Highlights from the KPMG Women’s PGA Championship
WATCH: Ladies European Tour highlights from Czech Open
In Gee holds on to win KPMG
Dubai’s Chiara Noja continues to dominate on LET Access Series
In Gee stumbles but clings on to KPMG lead
In Gee stays in charge after equipment change
KPMG: In Gee Chun jumps out to early lead
Five to watch at KPMG PGA Championship
KPMG Women’s PGA Championship doubles purse to $9m
Saudi girls celebrate Aramco podium spot
Dubai’s Chiara Noja skips another event through injury
Abu Dhabi-based 12-year-old wins in Scotland
All the latest news from around the UAE and beyond
Bronte Law triumphs in London
WATCH: Highlights from Day 3