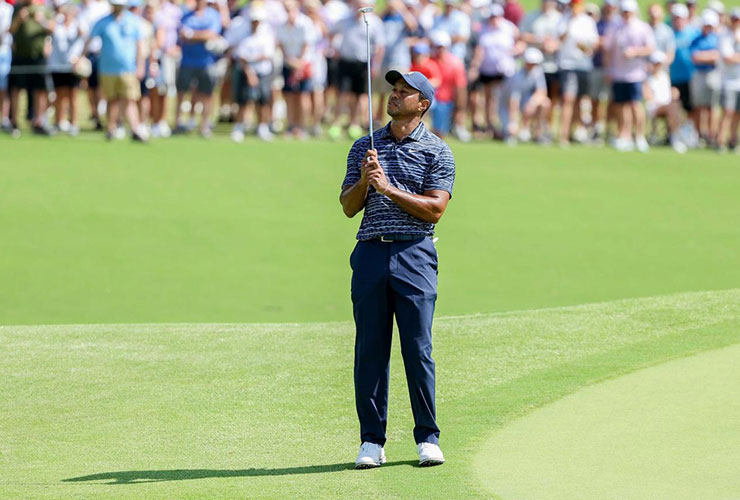 By Dan Rapaport
The game has changed, but Tiger Woods’ strategy has not. His body and his personality have, but his strategy has not. Woods would’ve 2-ironed his way around Southern Hills on Thursday at the PGA Championship with two perfect legs, and he 2-ironed his way around Southern Hills on Thursday with two surgically rebuilt ones. It’s no mystery why: Woods won 15 major championships playing highly conservative golf. One of those came here, 15 years ago, and Woods figured he’d pick apart this Oklahoma gem in similar fashion this time. Plot his way around. Play to his spots.

These are, for better or worse, phrases of the pre-ShotLink era. We know more about what leads to low scores today, and the data tells a clear story: closer to the hole is better. Rory McIlroy and Jordan Spieth, paired with Woods in the day’s most anticipated threesome, know this — it’s why both hit driver off the 12th tee, easily flying the bunker guarding the left side of the fairway. McIlroy’s trickled out to 354 yards and left him 86 yards in. He flicked a lob wedge inside two feet. Birdie. Spieth doesn’t quite have McIlroy’s speed, but he poked one out there 328 yards and hit his approach to nine feet. Birdie. Tiger went with 2-iron, had 188 yards in, hit a high percentage shot to 21 feet and two-putted. Woods was the late-80s Detroit Pistons team running a complex set to free up a mid-range jumper; Spieth and McIlroy were the modern-day Golden State Warriors firing up 3s.

We’re cherry picking here, and his club selection wasn’t the only (or perhaps even the main) reason Woods shot four-over 74 on Thursday. After starting two-under through his first five holes, Woods was awful out of bunkers and looked to be in significant pain throughout the rest of his round. He hit just seven of 18 greens in regulation and shot four-over-par on his back nine.

“I got off to a great start and didn’t keep it going,” said a very sweaty Woods. “I really didn’t give myself any looks for birdie. I was struggling trying to get the ball on the green, and I missed quite a few iron shots both ways. It was a frustrating day.”

It’s important to remember this was only his fifth competitive round of golf since his February 2021 car accident. He’s still very much recovering from the damage done to his right leg, and it makes daily adjustments to his golf swing.

“I just can’t load it,” he said of the injury. “Loading hurts, pressing off it hurt,, and walking hurts, and twisting hurts. It’s just golf. I don’t play that, if I don’t do that, then I’m all right.”

It certainly didn’t help matters that Woods was fighting an uphill battle strategy-wise.

In his heyday, Woods was one of the five longest hitters on the PGA Tour. He could afford to lay back off tees because his stinger would roll out so far that it wouldn’t be much behind most guys’ drivers. And he hardly ever missed a fairway with it. His driver, on the contrary, would often go haywire. Everyone’s driver would often go haywire. Advancements in club technology and a less spinny ball have players hitting the ball longer and straighter than ever before.

Woods has benefitted from the tech boom, too. He is 46 years old with a fused back and pins and rods and screws in his leg, and yet he still has about tour-average speed. When he did hit the D-stick on Thursday, he wasn’t all that far behind his playing partners. On the two drives that’ll count for official distance stats, Woods averaged 346.4 yards (a couple downwind par 5s that are a bit misleading). But when you count all his drives, Woods averaged 293.4 yards off the tee on Thursday compared to McIlroy’s 331.6 and Spieth’s 319.3.

While Rory McIlroy and Jordan Spieth were using drivers off most tees, often Woods went the conservative route with irons.

The reason for that discrepancy isn’t a matter of ability; it’s a choice. On the par-4 fourth hole, Woods went with iron and pulled it into the left rough. It traveled just 221 yards and left himself virtually no chance to access a tucked front pin. He made bogey. Spieth hit driver and was 76 yards closer. McIlroy was 106 yards closer. Woods went with iron again on the ninth hole, flaring one that hit a tree and kicked into the fairway. It traveled just 198 yards and left him a 4-iron into a shallow green. He had to get up-and-down for bogey. McIlroy (birdie) and Spieth (par) both hit driver-wedge.

“It wouldn’t have been so far back if I would have hit the iron shot solid and put the ball in the fairway,” Woods said. “I was playing to my spots, and those guys obviously have a different game plan. It’s just different.”

Therein lies the danger of such a conservative strategy. Woods is correct; if he hit the fairway on No. 4 he would’ve had an 8- or a 9-iron in. But he didn’t hit the fairway. When you lay back and still miss the fairway, you’re double stuck. The potential benefit of laying up is rather small, and the risk of missing the fairway with iron is massive. 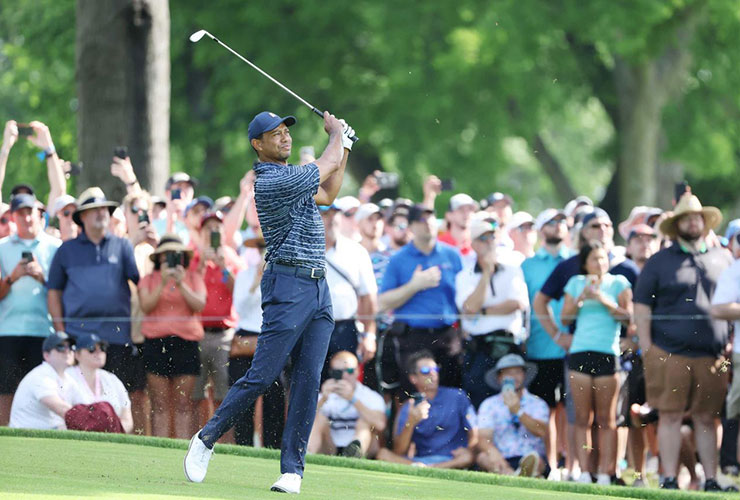 Woods knows this reasoning, but he’s famously stubborn when it comes to club selection and strategy. Whereas a majority of players will consult a statistics/data breakdown of each course before they play it, Woods trusts his feel and his eyes. You probably would too if you’d accomplished what he has in this game. But all things evolve, including golf course strategy.

“The game is played very differently now, and it’s very aggressive. We were talking about it today, [caddie] Joey LaCava and I, the days of the Lee Janzens and the Scott Simpsons and the Faldos of the world, playing that kind of golf is gone. You go out there and hit driver a lot, and if you have a hot week, you have a hot week and you’re up there. The game is just different. It’s much more aggressive now, and I know that.”

Knowing it and acting on it, however, are clearly two very different things.