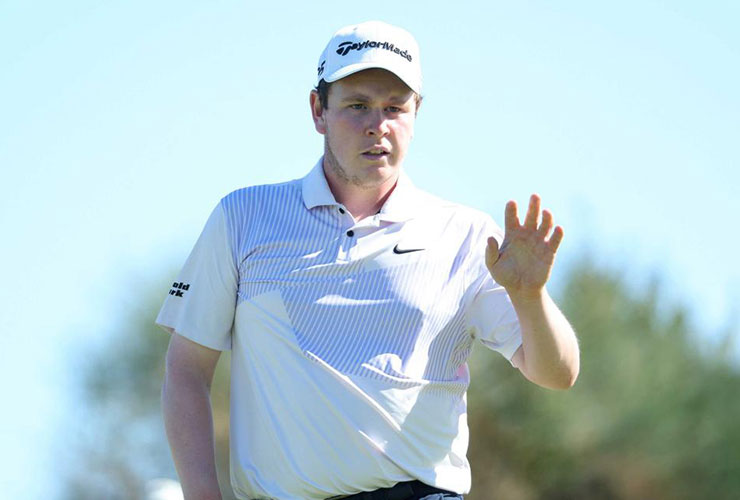 By John Huggan
At first glance, the leaderboard after three rounds of the 79th Italian Open made predicting the identity of the new champion pretty straightforward. At 10 under par, US Open champion Matt Fitzpatrick was at the top after 54 holes at Marco Simone Country Club. One shot back was Rory McIlroy, the newly minted FedEx Cup champion fresh off a runner-up showing at the BMW PGA Championship.

While no one did beat Fitzpatrick’s 72-hole total of 14-under 270, the Englishman didn’t win. Instead, it was Robert MacIntyre claiming the historic title and the biggest share (€510,000) of the €3 million prize money payout after making a birdie 4 on the par-5 18th, the first extra hole of their sudden-death playoff, to beat Fitzpatrick.

En route to what is his second DP World Tour victory — but easily the most significant — the 26-year-old Scot made 11 birdies over the course of an endlessly eventful final day. Alongside a host of challengers that included Frenchman Victor Perez (third), Australian Lucas Herbert (T-5) and Englishman Aaron Rai (T-5) as well as McIlroy (fourth), Fitzpatrick and MacIntyre filled the gap between expectation and realisation with excitement, drama and plot-twists that augur well for next year’s Ryder Cup between Europe and the United States.

In what is hopefully a prelude to the sort of entertainment we will experience during the transatlantic tussle 12 months from now, a little bit of everything transpired less than 12 miles from the centre of Rome. Just outside the ‘Eternal City’, the ever-uncertain outcome perfectly fit the game of golf’s inherent randomness — and underlined the notion that stroke-play only becomes truly interesting when it morphs into match play.

Confirming that theme, MacIntyre’s final-round numbers over the 7,268-yard layout were startling. In transforming a generally disappointing year that had seen him “double” his World Ranking from 55th to 110th, the lefty had twice as many birdies (10) while shooting a closing 64 as he did pars. That’s the sort of golf that wins tournaments and, perhaps just as significantly, matches.

That last part is nothing new for MacIntyre, of course. Before turning professional, the lad from Oban on Scotland’s west coast won the 2015 Scottish Amateur and was a finalist at the 2016 British Amateur at Royal Porthcawl. During the 2017 Walker Cup at the Los Angeles Country Club, he emerged unbeaten from two singles matches with now three-time PGA Tour winner, Cameron Champ. When it comes to head-to-head play, Macintyre has a pedigree.

“This victory means everything,” he said. “I was down-and-out about two or three months ago. I didn’t know what I was doing. I didn’t know where to go. But I spoke to the right people and started working with [swing coach] Simon Shanks. I’ve hit two perfect shots into the last hole there. So much hard work has gone into this. My approach play has gone up a notch. And that showed today.”

That last part was certainly in evidence during MacIntyre’s outward 29. None of the four birdies he made in five holes involved holing a putt more than two feet long.

“I felt so in control of my ball this week, with my wedges and my long irons … and even the hybrid that only came into the bag last week,” he admitted.

Indeed, it was ball-striking of the highest order, even if there were understandable stumbles to follow before victory was clinched. Fitzpatrick’s eagle-birdie burst on the 11th and 12th, combined with the eventual champion’s brace of bogeys on the 14th and 15th meant there was never a dip in the interest level. (Fitzpatrick would finish with a 67 that included a birdie on the 18th to force extra holes.) McIlroy, too, was a contender after fighting back from an opening double bogey, but only until a badly pushed tee shot at the drivable par-4 16th found water and led to a momentum-killing dropped stroke before finishing with a 68.

“I definitely heard the roars from behind,” said MacIntyre, who will rise from 73rd to 15th on the DP World Tour standings. “I hit a terrible shot on the 15th, which put my back against the wall. But I dug in. I’ve got a dogged attitude. I never give up. When I get punched, I punch back. The birdies coming in were massive and thankfully I got one more in the playoff.”

Inevitably, the champion’s mind turned to what might lie ahead of him and his European mates 12 months from now.

“My main goal, my only goal for the next year, is to make the Ryder Cup team,” Macintyre said. “So I’ve done this on the right golf course. At the start of this week, I didn’t think this was going to be the one, not with the style of play needed on this course and the way I was playing. But we worked on a few things Tuesday and Wednesday.”

And by Sunday he had them all just about right.