Max Homa, a fortunate winner at the Fortinet, heads to the Presidents Cup with a chip on his shoulder 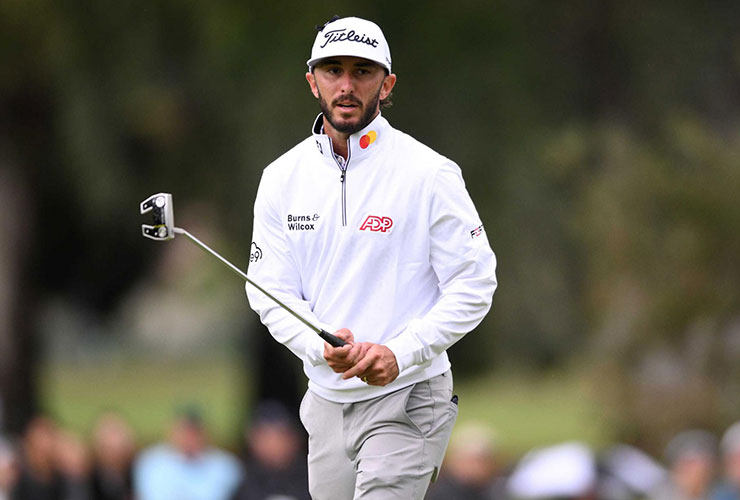 Golf will do that.

Max Homa successfully defended his title at the Fortinet Championship on Sunday and now heads to his first Presidents Cup in Charlotte, where he likely will be relied on heavily by US captain Davis Love III considering that Homa is a former winner at Quail Hollow Club. A bit of Hail Mary-type brilliance set up Homa’s unlikely win when he chipped in from 33 feet for a birdie on the 72nd hole to tie Willett.

Chomping emphatically on chewing gum, Willett smiled broadly at his opponent. Then he settled over a putt of three feet, seven inches for his own birdie and the win. He hit the left lip. The ball skittered almost six feet by. On the comebacker, Willett’s ball broke left, again hit the left edge and looped around and out.

Willett was still laughing as he shook Homa’s hand and offered a brief embrace. Had to be shock. Had to be. Homa looked in shock, too.

“Obviously, going to remember that last, but good week, nice to be in contention basically all week from Friday,” said Willett, rummaging through his emotions to focus on something positive. “Yeah, just a shame how I finished but that’s golf. We’re going to do it again another day.”

Homa claimed his fifth career PGA Tour title and earned $1.44 million by posting 16-under 272 on the North Course at Silverado Resort and Spa after shooting a four-under 68. Willett had a 69 as his bid for his first PGA Tour win since capturing the 2016 Masters came up painfully short.

“That was crazy. I still don’t really know what happened,” said Homa, 31, who won for the third time in his native California and for the fourth time after trailing through 54 holes. “Just kind of one of those weekends you just had to hang around. My coach told me that this morning, he said just hang around as long as you can and got to see what happens.”

With tee times moved up because of a rainy forecast in Napa, California — that proved very accurate — Willett led for much of the afternoon after starting the final round tied with Homa and one stroke behind Justin Lower, who is somewhat of a kindred spirit. Both Willett and Lower finished outside the top 125 on the 2021-22 FedEx Cup eligibility points list, but they were able to keep their PGA Tour cards when Cameron Smith, Joaquin Niemann and four others jumped to the LIV Golf series after the Tour Championship, pushing them up the standings and giving them new life.

And they made the most of it. Well, almost. Lower couldn’t keep pace with his playing partners, carded a one-over 73 as the round was contested using preferred lies in the cool, wet weather. He finished in a tie for fourth at 276. Still, his winnings of $360,000 were more than half his career earnings of $716,970 at the start of the week.

While Willett at one point held a three-stroke lead, Homa wouldn’t go away. Still, Willett looked to have secured the win when he guided home a 10-foot par save on the 17th hole to preserve a one-stroke lead and then wedged his approach to less than four feet at the par-5 18th while Homa left his third shot from the front greenside bunker in a closely mown area short of the putting surface. After getting to place his ball on a slight upslope for a pristine lie, Homa went for a spinner and his ball raced into the cup.

“I spun it and once it hit the pin, it almost like spun straight into the ground. It was just one of those things,” said Homa, whose wife Lacey, despite being eight months pregnant, walked the whole way in the gallery. “Golf’s a weird game, some crazy stuff happens on the last hole it seems like and that was very crazy.”

Willett said he hit the first putt too hard. The second one he played straight, but it broke right to left. Crusher of a finish, even with an $872,000 pay day. But the Englishman held his head high and exhibited class when he said: “Bit of a shame to kind of finish how I did, but no, he [Homa] is heading off to the Presidents Cup and hopefully he plays well there, too.”

Homa is intent on doing just that after being on a bit of a mission at Silverado.

“I’m just happy to be in form, to represent my country, play with those boys. They’re some good golfers, so I just wanted to come in in form,” he said. “Honestly, I got a lot of people … I know this is Twitter, but I’ve had a lot of people tell me if the LIV guys wouldn’t have left, I wouldn’t have made the Presidents Cup team. So I had a little bit of a chip on my shoulder this week.”

Homa couldn’t help but feel for the crestfallen runner-up, and returned the kudos. “Yeah, he is obviously a tremendous golfer. He’s won the Masters, he’s won I think eight times in Europe. He’s just a very talented dude and has a great attitude,” Homa said. “You can see why he’s had so much success. He composed himself unbelievable today, never buckled really. And then on the last, obviously that’s not the way anybody could foresee it going, but still just a really classy guy.”

That class included choosing not to whine as he left wine country.

“You know, first out of the season, like I said, to be in contention, things are in a good place,” Willett maintained. “Yeah, we’ll live to fight another day.”

Not easy to say when you’re dying inside. But he has no choice but to believe it.

You may also like:
Golf Digest Middle East presents Oktoberfest 2022
MacIntyre holds off Fitzpatrick to claim Italian Open
Cam claims LIV Golf title as Sergio responds
Greg Norman gets a Cam mullet
Cam turns on the style at LIV Golf Chicago
Dustin delivers once more on LIV Golf
Rory to face LIV Golfers at Dunhill Links Championship
Mickelson ponders withdrawing from PGA Tour lawsuit
Stenson comes out swinging in Chicago after Boston scare
DeChambeau unhappy with  Presidents Cup omission
Rickie Fowler ready for a new challenge on PGA Tour
Zalatoris explains why he did not chase the LIV cash
Who will be the Aces in the pack at LIV Golf Chicago?
Cam Smith has Aussies punching hard on LIV Golf tour
WSJ examines Monahan’s use of PGA Tour jet
All you need to know ahead of PGA Tour season
Van Dam aims for double impact in New York
Team Europe should fancy Ryder Cup chances
DP World Tour Championship set for a week of fun
Meet Carl Yuan, your favourite golfer you don’t know yet
Puig prepares for life as a pro in Chicago
Dubai Desert Classic set for January return — without Slync
Get your FREE September edition of Golf Digest Middle East here