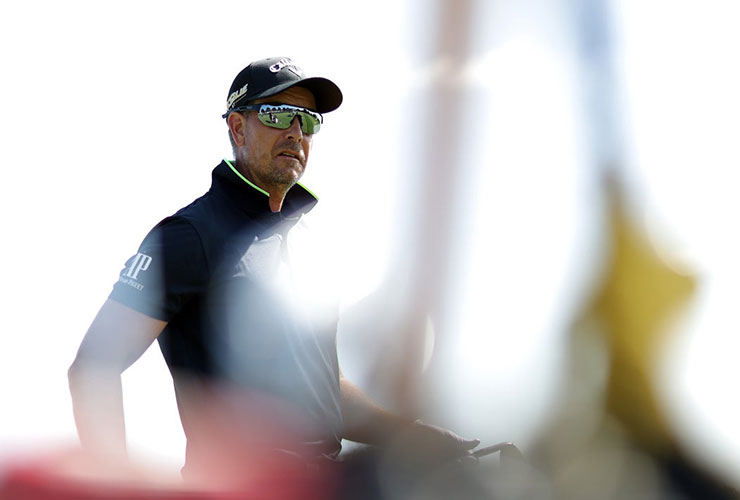 By Mike McAllister, Contributing Writer
Two weeks ago, just prior to his opening round at the LIV Golf Invitational Boston, Henrik Stenson began his warm-up routine. With a wedge in hand, he tilted his head forward and looked down, but something felt wrong as he took a swing. A couple of seconds later and …

He immediately knew what was happening. It was vertigo, something that has plagued him on occasion, although not recently. Someone found him a chair and placed it in a shady area, where he took a seat. But he was in no position to play. Stenson was forced to withdraw, certainly a disappointment given he had won the previous event at Bedminster in his LIV Golf debut.

The Swedish star is back now and ready to tee it up on Friday for the first round at LIV Golf Invitational Chicago. He’s not quite 100 per cent but he’s pretty close — and he expects to avoid a recurrence at Rich Harvest Farms.

“We’re a lot better,” he said on Thursday before heading out for a practice round. “I’ve had vertigo in the past, couple of times over the years here and there. It was like I wasn’t knowing what was going on when I got it, but it’s probably been 8-10 years since last time.

“It’s something we try to stay away from, but it has happened before. Just have to deal with it. Took a couple of days to get somewhat back to normal. I feel like 1 to 2 per cent off every now and then, but all in all, we should be good to go.”

MORE:  Who will be the Aces in the pack at LIV Golf Chicago?
Cam Smith has Aussies punching hard on LIV Golf tour
Puig to go pro in Chicago
LIV Golf Chicago field revealed
Patrick Reed makes case for his defence

Stenson said the vertigo problem is essentially a “positional thing” with his head.

“I had another tournament 15 years ago that I played,” he said. “I couldn’t look down to putt but I could hit. I was playing quite nicely but I had to just to line up and walk in quickly and hit the putt and get out of that position. It’s not ideal when that occurs.”

He’s not under any medication, although he did have a doctor on-site checking on him this week. The only preventive measures are specific exercises that target the neck and ear to help optimise his equilibrium.

Meanwhile, he’s heard plenty of stories from others who have battled vertigo issues.

“It’s actually funny,” he said. “After I had that and had to pull out, there’s been quite a few people that tell me, ‘Oh, I’ve had experience with that,’ or ‘Oh, I’ve got issues with that.’ I wouldn’t say it’s common common, but it’s not totally uncommon either. Anyone who’s got it, they know what we’re kind of dealing with and they understand that playing golf was not really an option.”

Provided he has no setbacks this week, Stenson’s biggest challenge will be to find the kind of focus and determination that he played with at Bedminster.

He had entered that tournament having been stripped of his duties as Europe’s Ryder Cup captain. It had been a tumultuous stretch for Stenson, being thrust into a controversy that extends far beyond his personal scope. But he used the situation to his advantage, playing with a chip on his shoulder. Playing with something to prove. 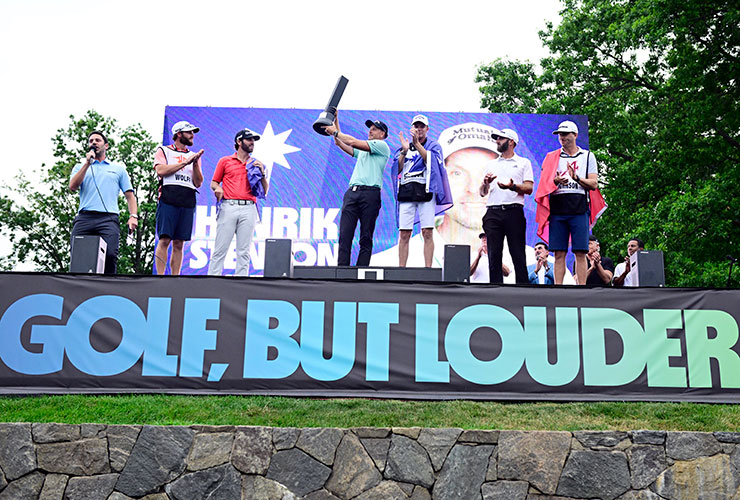 Henrik Stenson on the podium at LIV Golf Bedminster

He opened with a seven-under 64 to grab a share of the first-round lead, then followed with back-to-back 69s to win by two shots over Matthew Wolff and Dustin Johnson. Meanwhile, his Majesticks took second in the team competition, their best finish in the first four LIV Golf events.

“The performance in New York, a lot of it was down to my focus and determination and that extra motivation,” Stenson said. “That was really one of my top performances I’d say throughout my career, mentally and how I went about things that week.

“Obviously I had the game to back it up and the first round was probably the best I played in the last five years. The next two rounds over the weekend wasn’t the prettiest but we still hit a lot of good shots in there, made some great putts and kind of kept it tidy.

“It’s a championship golf course, that one. Just shooting two-under, two-under on the Saturday and Sunday, and given the fine start I had, that was enough to keep the other guys behind given how hard it is to really shoot low around that golf course.”

Having proven his point, he knows that finding that extra motivational gear will not be as easy in Chicago.

“I don’t necessarily see that’s something you can bring every week,” said Stenson, who earlier this week participated in a LIV To Give clinic involving individuals with special needs. “If it was that easy to just like put that on, I guess a lot more players would do that on a regular basis. I feel like it’s always been a case of keep working on the game. I feel like body-wise, I’ve been pretty good, barring the vertigo. We’ve been in pretty good shape physically at 46 and game-wise also. If I put my game together, I still feel like I can compete with the best players.

“It’s almost like the more people say you can’t, the more I want to prove them wrong. I think we showed that in New York. We’ll try to bring that out a bit more.”

Stenson definitely feels like his game is trending in the right direction. The Bedminster win was not an aberration but a confirmation that his hard work is paying off. And with just four tournaments (including the team championship finale) left on the 2022 inaugural season, Stenson is determined to make a big push.

“Hope we can finish off the year strong,” he said. “Then for the first time in 17 years I guess, I’m looking forward to having an off-season. Try to get ready. Strong in the gym and get hungry and ready for next year to have a bit of a longer break into the ’23 season. You really feel like when it’s time to kick off that, you really want to head out and play. That’s one of the things I’m really looking forward to.”

That, and being able to tilt his head without the world spinning off its axis.

You may also like:
Golf Digest Middle East presents Oktoberfest 2022
DeChambeau unhappy with  Presidents Cup omission
Rickie Fowler ready for a new challenge on PGA Tour
Zalatoris explains why he did not chase the LIV cash
Who will be the Aces in the pack at LIV Golf Chicago?
Cam Smith has Aussies punching hard on LIV Golf tour
WSJ examines Monahan’s use of PGA Tour jet
All you need to know ahead of PGA Tour season
Van Dam aims for double impact in New York
Team Europe should fancy Ryder Cup chances
DP World Tour Championship set for a week of fun
Meet Carl Yuan, your favourite golfer you don’t know yet
Puig prepares for life as a pro in Chicago
Dubai Desert Classic set for January return — without Slync
Get your FREE September edition of Golf Digest Middle East here