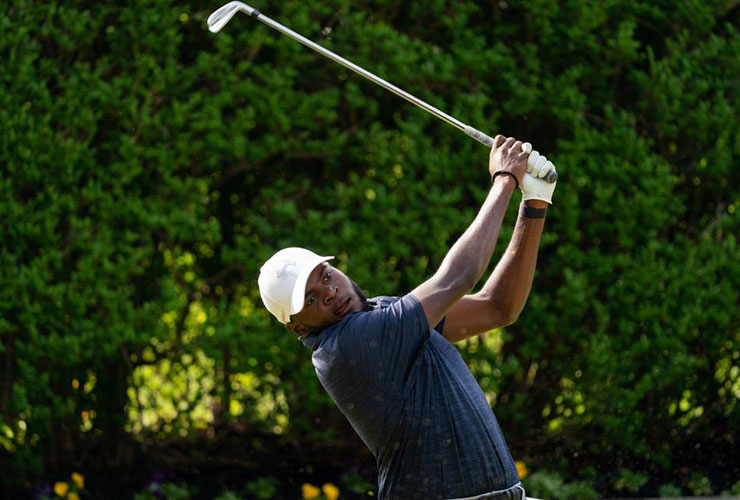 By Jay Coffin
It’s already been quite a week for Gregory Odom Jr, and the real action is still to come.

The senior from Howard University has a team and individual victory under his belt, and in less than 24 hours after his last putt dropped at the PGA Works Collegiate Championship, he’ll be playing alongside the best players in the world on a sponsor’s exemption at the PGA Tour’s Wells Fargo Championship.

Odom shot a four-under 68 on Wednesday to win the Division I portion of the PGA Works event by four shots over teammate Everett Whiten Jr. Odom, also the winner here last year, shot 69-71-68 over the three days at both Union League Liberty Hill and the Union League Golf Club in Philadelphia.

In the individual race, Odom was cruising during the final round making four birdies in the first nine holes but a double-bogey on the par-4 11th hole set him back. He was able to rebound with birdies on Nos. 13 and 14 and ultimately cruised to the victory.

Whiten, also a senior, had even more of a topsy-turvy final round and made only four pars. He started with four consecutive birdies, made nine total on the day, but five bogeys prevented him from putting more pressure on Odom late.

Odom celebrated the win with his team and was immediately off to Maryland where he is grouped with Bo Hoag and Michael Gligic for Round 1 of the Wells Fargo Championship at TPC Potomac.

Howard, in only in its second year of existence as a golf programme, was three shots out of the team lead after the first 36 holes. But Arkansas-Pine Bluff stumbled mightily, Howard shot one-under as a team and took home the sweep of team and individual honours. Chicago State was second, only one shot behind Howard.

“I was just trying to keep hitting golf shots,” Odom said. “Coming into today three shots back, I knew my guys would stay strong. Today we overcame obstacles. This is huge for the Howard golf team.”