From car accident to Zurich Classic leader board, tour rookie Lipsky has already had an eventful week 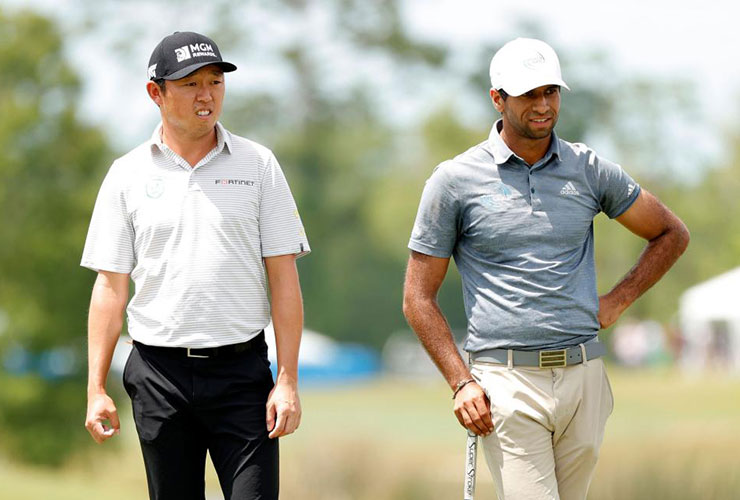 David Lipsky and Aaron Rai prepare to putt on the ninth green during Thursday’s first round of the 2022 Zurich Classic of New Orleans. Sarah Stier

There are ways to prepare for a PGA Tour event. Being involved in a car accident is not among those recommended.

Thankfully, David Lipsky wasn’t hurt, nor was anyone else in the fender bender the 33-year-old tour rookie was involved in Tuesday morning as he was driving to TPC Louisiana ahead of a practice round at the Zurich Classic.

Lipsky said that he was changing lanes to avoid a car ahead of him that was broken down when he was hit from behind by another vehicle. “Yeah, it was a little bit of a hectic beginning to the week,” Lipsky said.

Your @Zurich_Classic co-leader David Lipsky, who is teaming with Aaron Rai, already had an eventful week. He was involved in a car crash on Tuesday heading to the course. He said no one was hurt in the accident. pic.twitter.com/EobINlcQ4B

Yet not so hectic as to keep him from sitting near the top of the leader board after the opening round on Thursday. Paired with England’s Aaron Rai, the duo shot a 10-under 61 during four-ball play to sit one off the lead after the morning wave.

Lipsky, a California native who lives in Las Vegas, made six birdies on his own ball in the best-ball format as well as holing out for an eagle from 113 yards on the par-4 eighth, the team’s second-to-last hole.

“David played some incredible golf, hit some shots really close, putted well,” Rai said. “And David made a lot of birdies, especially early on and around the turn, which really got things going for us.”

This is the first time Lipsky and Rai, also playing his first year on the PGA Tour, have competed in the Zurich Classic, and while it might not seem like the American and the Brit have much in common, the two had become friendly competing together on the DP World Tour the past half-dozen years. Additionally, their caddies often room together on the road, which is how the pairing came to be.

“It’s just a comfortable fit for us,” Lipsky said. “We know each other from the European Tour. So we always have that in common. I think it was meant to be.”

After earning his PGA Tour card via Korn Ferry Tour finals last fall, Lipsky had missed the cut in six of his first seven tour starts. Since then, the two-time European Tour winner made seven of nine cuts, including a T-7 finish at the Corales Puntacana Resort Championship in March.

Similarly, Rai, 27, had success in Europe, winning twice in the previous three years, before earning his card via the KFT Finals, but has been slow to find his footing on the PGA Tour. He’s posted just one top-10 finish (T-6 at Farmers) in 16 starts.

The comfort of sharing the load this week seemed evident on Thursday but will take on a different complexion Friday when the pair compete in alternate-shot play. “I’ve never played foursomes before,” Rai said. “So tomorrow will be the first time.”

“There’s an event in Europe, it was called the GolfSixes. You only played like six holes. Every hole had like a different theme. One was alternate shot, one was best ball. So I played like two holes alternate shot like five years ago.”

With Lipsky already having an unusual week, perhaps not knowing what you don’t know will be a good thing.

More
Morikawa can’t stop dunking from off the green
Highlights from Day 1 of Zurich Classic
DP World Tour heads back to where it all began 50 years ago
Is Ash Barty aiming for a shot at a golf career?
Your Zurich Classic tee times
Our 11 favourite teams at Zurich Classic
Report: First PGA Tour player request to play LIV Golf events
LIV Golf ready to go live as tickets go on sale
WATCH: Dylan Frittelli in bizarre rules gaffe